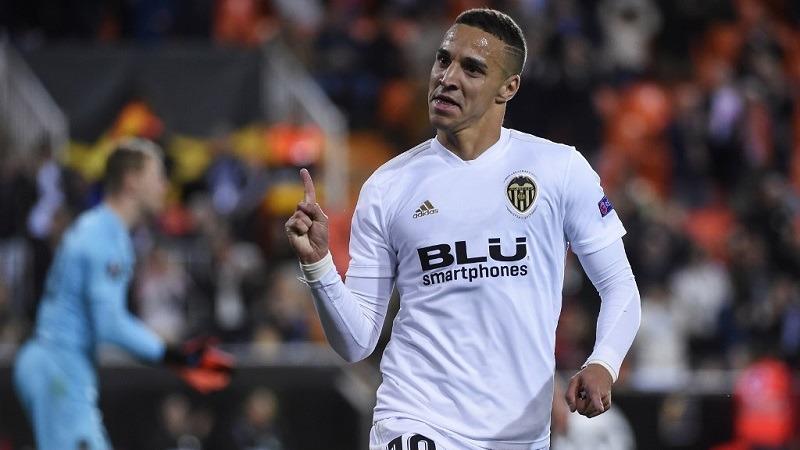 In this file photo taken on March 7, 2019 Valencia's Spanish forward Rodrigo Moreno celebrates after scoring a goal during the Europa League round of 16 first leg football match between Valencia CF and FC Krasnodar at the Mestalla Stadium in Valencia. (JOSE JORDAN / AFP)

MADRID - Atletico Madrid are on the verge of signing Valencia's Spain international striker Rodrigo Moreno for a fee of around 60 million euros (US$67 million) according to reports in Spain.

The 28-year-old missed morning training with his club and travelled to Madrid after saying goodbye to his teammates in order to undergo a medical with Atletico and confirmation of the deal is expected in the coming hours.

The Brazil-born forward has been a key player for Valencia over the past two years, scoring 16 league goals in the 2017 Liga Santander and eight last season when he also scored in Valencia's 2-1 win over Barcelona in the final of the Copa del Rey.

Atletico view Rodrigo as a player who will help cover for the loss of Antoine Griezmann to FC Barcelona and he will form a varied attacking trio alongside Diego Costa and 19-year-old Portuguese forward Joao Tomas, who joined from Benfica (one of Rodrigo's former clubs) this summer.

Rodrigo's arrival will open the door for Atletico to sell Angel Correa and Nikola Kalinic, who struggled to make an impact last season with just 17 first team appearances and two league goals.

The sale of the striker is a serious blow to Valencia's hopes for the coming season however, because although the club signed Maxi Gomez from Celta Vigo over the summer, the big Uruguayan is a totally different kind of forward to Rodrigo, who is fast and mobile and suited to Valencia's counter-attacking style under coach Marcelino Toral.

It also remains to be seen what damage Rodrigo's departure will do to the already fragile relationship between Valencia's General Manager, Mateu Alemany and club owner Peter Lim, less than a month after Alemany almost resigned because of disagreements over transfer policy with Valencia's Singapore based owner.