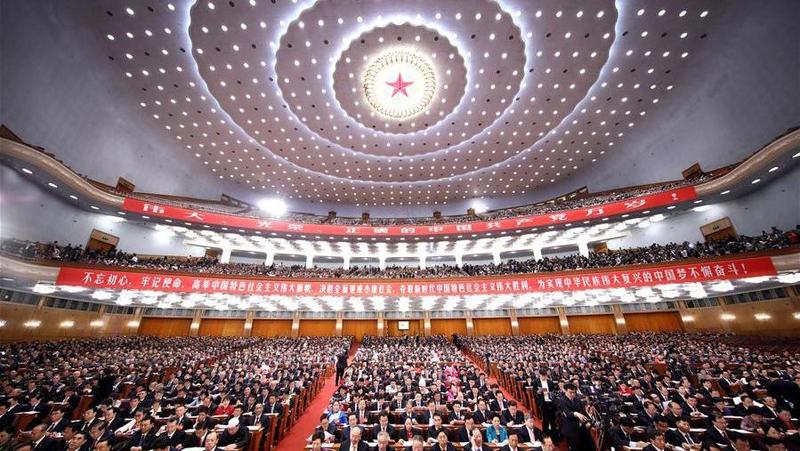 The Communist Party of China (CPC) opens the 19th National Congress at the Great Hall of the People in Beijing, capital of China, Oct. 18, 2017. (LAN HONGGUANG / XINHUA)

The ongoing 19th National Congress of the Communist Party of China has received messages of greeting from foreign leaders, political parties and organizations around the world. They speak highly of the Party's leadership as well as China's socioeconomic development and global contributions, and express full confidence that the CPC will lead China to even greater success. The following is an edited summary of these messages.

The 19th National Congress of the CPC is an important event, and it will not only chart a path for China's economic growth and prosperity in the future, but also enhance the country's influence on the world economy.

We are looking forward to further strengthening our friendly and mutually-beneficial cooperation on the basis of a win-win situation. Firmly we believe, this cooperation will produce fruitful result.

secretary of the Central

Committee of Greece's Coalition of the Radical Left, or SYRIZA, and Yiannis Bournous, head of European and international affairs of SYRIZA

If a world of shared and sustainable prosperity, fair growth and balanced power is to ever exist, China will have a leading and indispensable role in it.

Under the leadership of the CPC, your country has undergone a remarkable development. China has succeeded in lifting millions of citizens out of poverty and has established a diversified and advanced economy that is now moving into a new level.

The party wishes to continue the tradition of friendship and cooperation with the CPC.

The 19th National Congress of the CPC will exert far-reaching influences on international politics, technological innovation and construction of a multipolar world.

chairman of the African Union

As a valuable partner of China, we congratulate you and the Communist Party on this great occasion and wish the Party and the People's Republic continued success in achieving your country's objectives.

Under the leadership of the CPC, the Chinese people have experienced massive social developments in all spheres of their lives and intensive civilization that continues and sets world trends of development.

I see the enormous opportunities through improvement of connectivity among the economies who support the Belt and Road Initiative, among which are the Central Asian countries. This plan in the future should become the key driver of growth for the whole world.

former speaker of House of Representatives of Japan

For a long time, the CPC, through its excellent leadership, has been leading China onto the course of modernization.

former president of the Republic of Slovenia

China has also become a key champion of peaceful global cooperation as well as of the strengthening of international peace and security. The international community is a major beneficiary of China's contribution to the work of the United Nations and of China's commitment to multilateralism in general.

former president of Poland and chairman of the Amicus Europae Foundation

The 19th National Congress of the CPC is an event of global importance that will shape not only the future of China, but also its relations with the world. Therefore it draws the world's attention and close observation. The world is expecting further reforms in China, and even better friendly cooperation with Beijing in the years to come.

former prime minister of the Republic of Hungary

Under the leadership of the CPC Central Committee with Xi Jinping at the core, China has become a major global power and its development in all fields has attracted worldwide attention. The Hungarian side believes that the 19th National Congress of the CPC will put forward new and ambitious goals.

former prime minister of Italy and president of Italianieuropei Foundation

Under the leadership of the CPC Central Committee with Xi Jinping at the core, China's reforms and opening up have been continuously pushed forward, which has laid a solid foundation for China's modernization.

On the international arena, China has been actively participating in the global governance through its climate change policies and the Belt and Road Initiative.

Its diplomatic efforts have contributed to the reform of global governance structure and the establishment of a community of shared future for mankind.

The 19th National Congress of the CPC not only shows the world the great achievements China has gained, but also charts the course for this great nation's future development.

The Vietnamese side firmly believes that the 19th National Congress of the CPC will set out development goals for the upcoming years, and under the newly-elected leadership the CPC will lead the Chinese people to new and even more remarkable successes.

Over the past five years under the leadership of CPC Central Committee, with General Secretary Xi Jinping at its core, the CPC has shown its strong commitment to building a beautiful China.

Through strong leadership and strategic planning, the CPC can and will embrace this historical responsibility to seek a sustainable path and contribute to the development of humanity.

The CPC and the Chinese people, under the leadership of the CPC Central Committee, with General Secretary Xi Jinping at its core, will surely score more brilliant achievements.

The CPC and Chinese people are expected to accomplish greater achievements in realizing the Chinese Dream of great national rejuvenation.

Without doubt, this (the 19th CPC National Congress) will be the most important political gathering in the world this year. The five years since the last Congress have seen major advances in China...China's role on the global stage has been marked by growing confidence.

executive director of National Committee on BRICS Research in Russia

The 19th CPC National Congress "is a milestone" to consolidate the leadership of the Party and present "scientific concept of Chinese and international development".

This important Congress has the potential of being both impactful and meaningful in terms of the Chinese state's role and mission both internally and internationally.

head of the Center for Security Policy, Charles University in Prague, Czech Republic

The Congress is valuable for the communication of China's internal and external policy and an opportunity to exchange point of views regarding the most important political, economic and social topics."

China is to embark upon a new chapter from the 19th CPC National Congress to shape the future of the country and to fulfill the expectations of the people of China.

Under the strong leadership of Chinese President Xi Jinping, China has achieved economic development brimming with vitality and it has also played a significant role in the global arena.

Under the strong and focused leadership of the CPC Central Committee with Xi Jinping at the core, the CPC has continuously guided the Chinese people to achieve the two centenary goals and realize the dream of the great rejuvenation of the Chinese nation, while China is becoming an indispensable force in the world.

China has made huge achievements in development under the wise leadership of Xi Jinping. Mauritania will, as always, strengthen and develop the cooperative partnership between the two countries, so as to benefit the two peoples.

The CPC has made universally-recognized and huge contributions in leading the national development, setting an example for parties of all countries including the PDP-Laban.

The 19th CPC National Congress charts the course for China's future development. Algeria wishes China and the Chinese people even greater advancement and success under the leadership of the great CPC.

secretary-general of the Fretilin, or the Revolutionary Front for an Independent Timor-Leste and prime minister of Timor-Leste

Timor-Leste wishes success of the 19th CPC National Congress, and expects it to set the direction for the future development of the party and the country and bring more benefits to the Chinese people.

president of the Croatian Democratic Union of Bosnia and Herzegovina, or BiH, and rotating chairman of the Presidency of BiH

The development concepts and strategies put forward by Xi Jinping have guided China to become an important force in the global arena. BiH and China will forge a closer partnership of cooperation after the 19th CPC National Congress.

The CPC has introduced far-reaching reforms that have resulted in unprecedented development at home as well as increasing influence and prestige on the world stage.

Ghana recognizes the role the strong Chinese leadership has played in the implementation of socialism with Chinese characteristics and wishes the 19th CPC National Congress a success as China strives for the final victory in building a moderately prosperous society.

Under the leadership of General Secretary Xi Jinping, China will surely continue to stick to the concepts of innovation, coordination, green development, opening up and inclusiveness and achieve greater progress.

The 19th CPC National Congress will draw a greater blueprint for the future development of China's various causes.

president of the Congress of Colombia

China has opened up a new prospect under the leadership of General Secretary Xi Jinping.

The Central Committee of the Ak Zhol Democratic Party of Kazakhstan

China's achievements in socioeconomic development stem from the correct leadership of the CPC.

After the 19th CPC national congress, we have no doubt that the Communist Party of China will continue contributions to the maintenance of peace and stability, to the global economy and to the enrichment of humanity in terms of cultural development and advances in science and technology.

The Central Committee of the Mozambique Liberation Front Party

The 19th CPC National Congress is not only an important moment for the CPC to review the all-round development of the party and the country, but also a milestone for making major decisions and leading China into a more beautiful future.

Since the 18th CPC National Congress, China has carried out economic and social reforms in all aspects, and the country has entered into a new era of accelerated development.

president of the Panamenista Party in Panama

Panama will further develop relations with the CPC on the basis of the one China policy.

president of Peruvians for Change in Peru

We wish the CPC a rising international reputation and new progress in economic development, science and technology and social harmony.

The guideline and policy made by the 19th CPC National Congress will further promote China's development in the coming five years and contribute to the world peace, stability and prosperity.