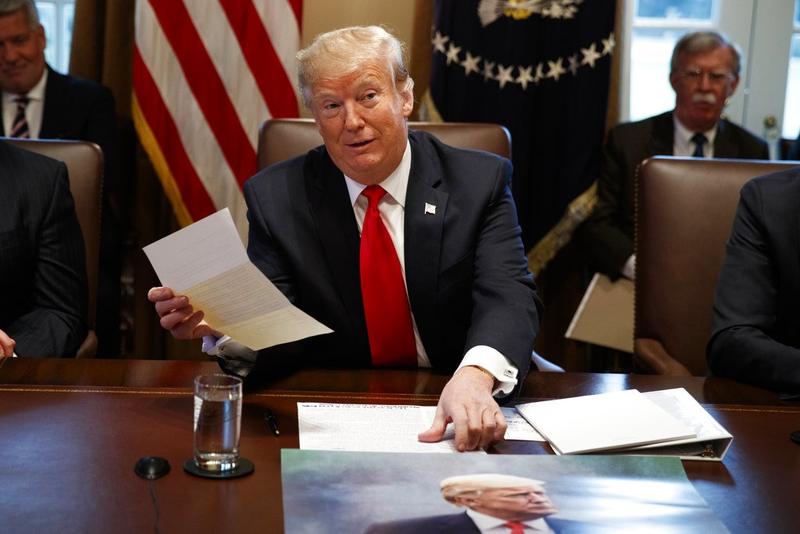 US President Donald Trump holds up a letter he says is from DPRK leader Kim Jong-un during a cabinet meeting at the White House, Jan 2, 2019, in Washington. (EVAN VUCCI / AP)

WASHINGTON —US President Donald Trump said on Wednesday that he has received a "great" letter from top leader of the Democratic People's Republic of Korea (DPRK) Kim Jong-un and expects their second meeting to take place in the "not-too-distant future."

"I just got a great letter from Kim Jong-un," Trump told reporters at the White House during a Cabinet meeting.

I just got a great letter from Kim Jong-un. We'll probably now have another meeting ... we'll be setting that up in the not-too-distant future

"We'll probably now have another meeting ... we'll be setting that up in the not-too-distant future," added Trump, who revealed in early December that his second meeting with Kim was likely to happen in January or February.

Trump's words came one day after Pyongyang released a series of positive signals over the denuclearization of the Korean Peninsula.

Kim said on Tuesday in his New Year’s speech that he would push forward the denuclearization and was ready to meet with Trump at any time.

The DPRK leader noted that he was willing to reopen the inter-Korean industrial zone in the DPRK's border town of Kaesong and resume the tours by ROK people to the DPRK's scenic resort of Mount Kumgang on its east coast "without any preconditions."

Kim also stressed his determination to work to build new relations with Washington on the condition that the United States takes corresponding measures.

READ MORE: Trump says progress being made on DPRK

"We could be left with no choice but to seek a new way if the US does not make good on its promises, misjudges our patience, while seeking to force things unilaterally and clinging to sanctions and pressure," Kim warned.

The relations between the DPRK and the United States improved last year. The first-ever summit between Trump and Kim was held in Singapore in June. Meanwhile, differences between the two sides remained over key issues like the scale of denuclearization, US sanctions, and whether to issue a war-ending declaration.

The Republic of Korea (ROK)'s presidential Blue House said the letter will play a positive role in denuclearizing the Korean Peninsula and building lasting peace.

Kim Eui-keum, the Blue House spokesman, told a press briefing that Kim's autograph letter to Trump was anticipated to play a positive role in the peninsula's complete denuclearization and the settlement of permanent peace.

Kim and ROK President Moon Jae-in agreed during their September summit in Pyongyang to normalize the two inter-Korean cooperation projects as soon as "conditions are met."

The normalization, however, has been delayed under international sanctions on Pyongyang.

The Blue House spokesman told reporters that the Kaesong project and Mount Kumgang tour would play a positive role in building peace on the peninsula as well as the peninsula's denuclearization.

The Kaesong Industrial Complex was closed down by the ROK in February 2016 over the DPRK's fourth nuclear test in the previous month. Before the shutdown, 123 ROK companies ran factories in the industrial zone, hiring about 54,000 DPRK workers.

The tourism project to Mount Kumgang, launched in 1998, has been suspended since a ROK tourist was shot dead in 2008 by a DPRK soldier after allegedly venturing into an off-limits area.