A scene from Ne Zha (PHOTO PROVIDED TO CHINA DAILY)

After shivering for most of last year through a harsh business winter, China's film industry ended 2019 on a hopeful note.

With the number of screens in urban areas reaching 69,787－more than any other country－the nation's box offices grossed 64.3 billion yuan (US$9.28 billion), up 5.4 percent from 2018, according to the China Film Administration, the sector's top regulator.

Last year, a significant chapter was written in the history of Chinese cinema, reflecting that homegrown films have made great improvement in expanding their diversity.

One highlight last year was the strong performance of Chinese blockbusters.

Of the 10 highest-grossing titles, eight were Chinese and the remaining two were from Hollywood. In both 2017 and 2018, six of the top 10 films were made by Chinese studios.

In addition, 47 of the 88 movies that took in more than 100 million yuan at the box office last year were made by Chinese filmmakers. 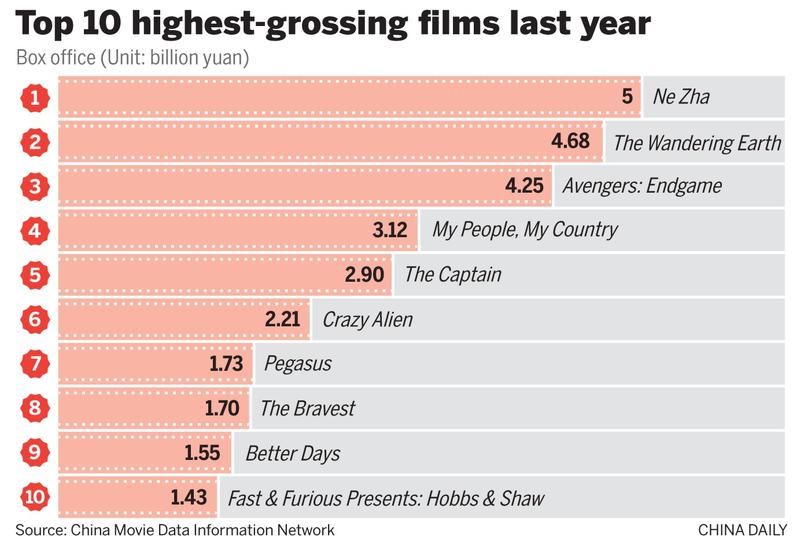 Rao Shuguang, president of the China Film Critics Association, said: "Last year, a significant chapter was written in the history of Chinese cinema, reflecting that homegrown films have made great improvement in expanding their diversity.

"The two highest-grossing movies, Ne Zha and The Wandering Earth－which together earned 9.68 billion yuan－boosted the morale of domestic filmmakers," Rao said after Beijing newspaper Securities Daily reported that with 1,884 film and television companies having closed, the local industry was "struggling in a severe winter".

It is one of only two films in the history of Chinese cinema to take more than 5 billion yuan, the other being action star Wu Jing's blockbuster Wolf Warrior 2, released in 2017.

Loosely based on a mythological figure evolving from ancient works of literature, Ne Zha was the 11th-highest-grossing film worldwide last year, according to Box Office Mojo. 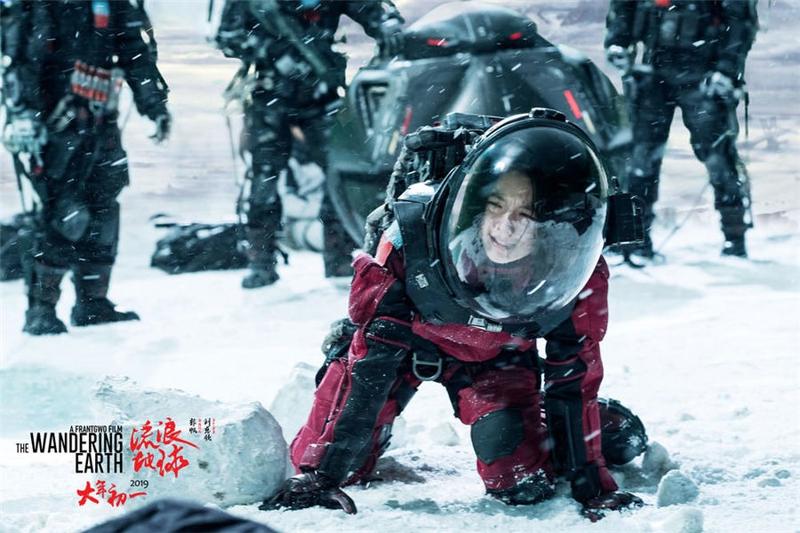 Poster of The Wandering Earth (PHOTO PROVIDED TO CHINA DAILY)

Cao Xiaohui, vice-president of the Beijing Film Academy Animation Institute, said that in addition to Ne Zha, the success of White Snake and The Legend of Hei, released in January last year and September respectively, show that the country's animators had found a way to win bigger audiences.

Inspired by one of ancient China's best-known folk tales, White Snake, which tells the bittersweet love story between a snake spirit and a handsome man, features a number of romantic scenes aimed at adult audiences.

The Legend of Hei, featuring a blend of martial arts and picturesque landscapes, centers on an adorable but powerful cat monster.

Cao said: "In the past, a number of domestic animators wrongly thought that such works should be made for children, making the storylines too naive and unappealing to adults. But after years of learning from top-class foreign counterparts and keeping an element of exploration in the storytelling, domestic animation works have improved a lot."

Taking second place after Ne Zha in the highest-grossing slot, The Wandering Earth, a sci-fi blockbuster adapted from the eponymous novel by China's first Hugo Award winner Liu Cixin. It was the 12th top-earning film worldwide. 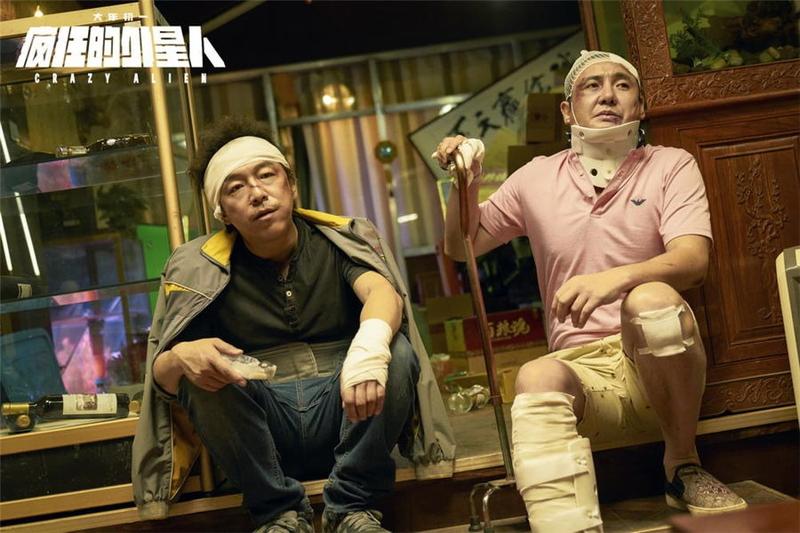 A scene from Crazy Alien (PHOTO PROVIDED TO CHINA DAILY)

Along with director Ning Hao's Crazy Alien, also inspired by a novella written by Liu, and other Spring Festival blockbusters such as Pegasus, a comedy hit, The Wandering Earth took the monthly gross in February to 11.2 billion yuan, the world's highest for a single month.

Edward Cheng, CEO of Tencent Pictures, one of the film's backers, said, "The Wandering Earth employs Chinese-style storytelling to convey the country's values and understanding of a shared future for humankind, as well as demonstrating Chinese ways to solve problems."

Directed by sci-fi aficionado Guo Fan, the movie is set in the year 2075 and uses 2,003 special-effect shots, 75 percent of them produced by domestic companies.

In the mid-1990s, China introduced an annual quota system for imports of foreign films.

Cui Ting, a film industry observer based in Beijing, said that as a result, before the success of The Wandering Earth, few people believed that a Chinese sci-fi movie could succeed in the home market, as the local industry lagged far behind Hollywood.

Enthusiastic filmgoers hailed The Wandering Earth as the start of "Year Zero" for Chinese sci-fi productions, a genre which had long struggled to earn recognition. 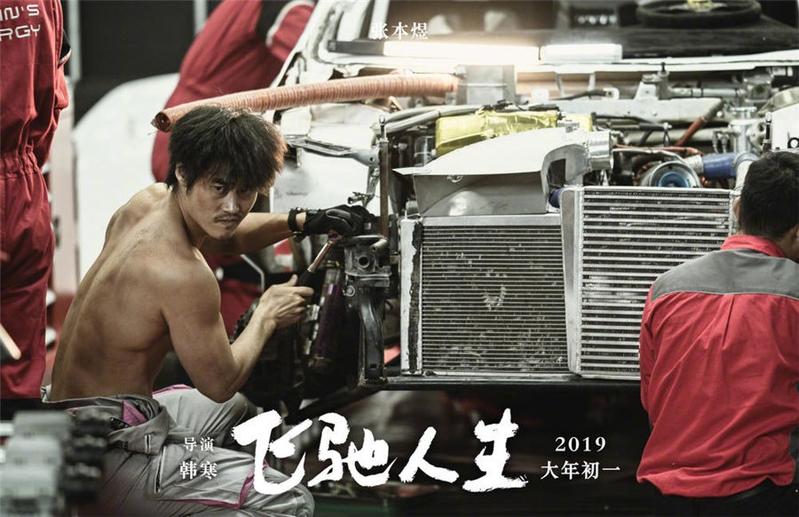 A scene from Pegasus (PHOTO PROVIDED TO CHINA DAILY)

But a shadow was cast over their expectations when Shanghai Fortress－a sci-fi film in which Shanghai stands as the last hope of resisting an alien invasion－flopped disastrously in August.

Even with a stellar cast, including heartthrob Lu Han and A-list actress Shu Qi, Shanghai Fortress, which reportedly had a budget of up to 360 million yuan, took just 123 million yuan at the box office.

In addition, online criticism of its plotlines and special effects saw the film receive 2.9 points out of 10 on Douban, China's most popular review site.

In November, Liu, the novelist, said during the 2019 Science Fiction Conference in Beijing: "We should not easily draw conclusions by saying that the door for Chinese sci-fi films to thrive has been opened by just one movie (The Wandering Earth). On the other hand, it's not fair to say that such a door has been closed by a single movie."

Liu said that Chinese sci-fi－including literature and movies－has only just taken off and needs to break free of "bottlenecks" in some aspects, ranging from scriptwriting to making props.

Meanwhile, a group of talented directors has proved that real-life stories can inspire and spawn blockbusters.

During the National Day holiday in October－one of the country's most lucrative box-office seasons－three films triggered unprecedented enthusiasm among moviegoers nationwide, propelling ticket sales for the week to 5.13 billion yuan, a year-on-year rise of nearly 136 percent. 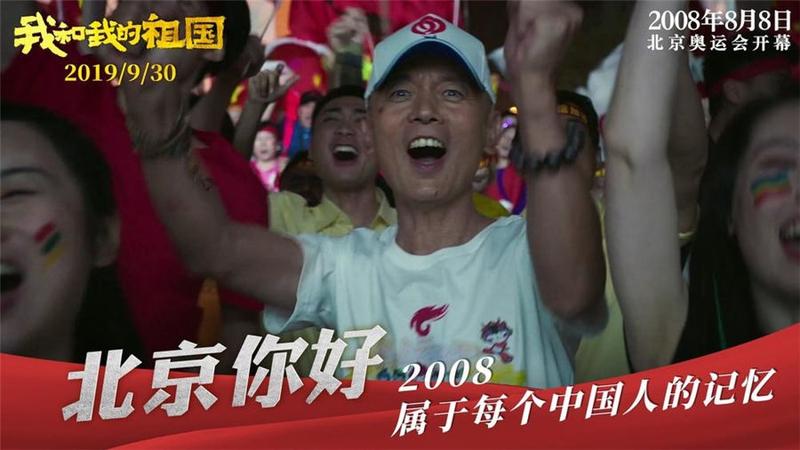 The top earner among the three was My People, My Country, an anthology of seven short stories marking the 70th anniversary of the founding of the People's Republic of China.

The other two movies were The Captain, based on the true story of a pilot who had to ensure the safety of 128 passengers and crew members when a plane's windshield was damaged in mid-flight, and The Climbers, which centers on Chinese mountaineers' ascents of Qomolangma, known in the West as Mount Everest, via the perilous north face in 1960 and 1975.

Yin Hong, deputy chairman of the China Film Association, said the success of these films marks the rise of the Chinese movie industry, especially in terms of post-production.

Cheng, from Tencent Pictures, said: "In recent years, China has produced a string of excellent movies, ranging from Operation Mekong to Operation Red Sea and My People, My Country. ... These movies easily strike a chord with audiences."

Such films, known in China as "mainstream melody movies", feature adaptations of real-life events and reflect the country's progress, achievements or revolutionary history.

In the past, movies of this type found it difficult to attract audiences due to their cliched depictions. However, the situation has changed in recent years, thanks to blockbusters that tell more human-interest stories and are studded with nail-biting action sequences and A-list stars. 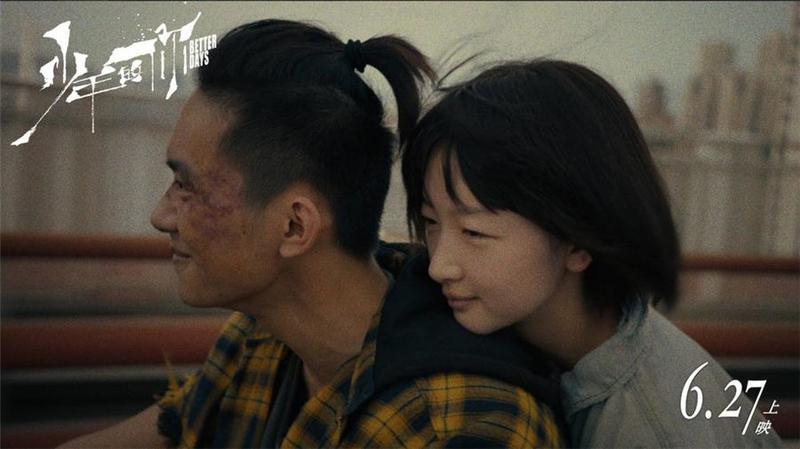 A scene from Better Days (PHOTO PROVIDED TO CHINA DAILY)

Despite not featuring in the top 10, some domestic films won both international and domestic acclaim last year.

Such works include So Long, My Son, which won best actor and best actress awards at the 2019 Berlin International Film Festival, and The Wild Goose Lake, the only Chinese-language film nominated at the 72nd Cannes Film Festival. 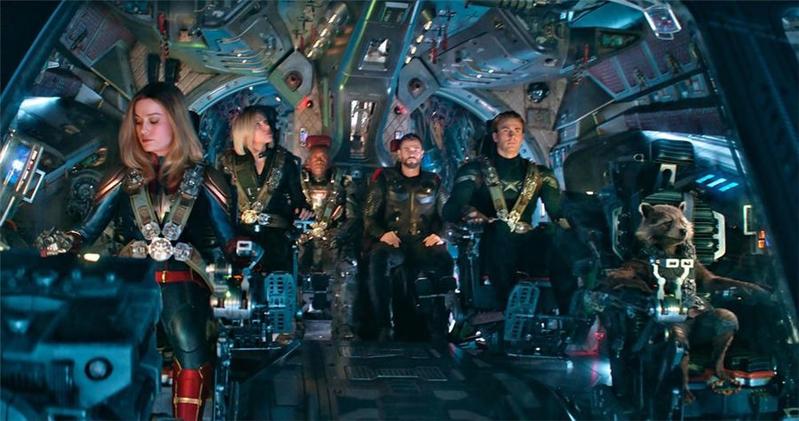 A scene from Avengers: Endgame (PHOTO PROVIDED TO CHINA DAILY)

Avengers: Endgame, the 22nd film produced by Marvel Studios, took 4.25 billion yuan to rank as the third-highest-grossing film in China last year. The other import in the top 10 was Fast & Furious Presents: Hobbs & Shaw, a spinoff of the Fast & Furious franchise, which ranked 10th.

Figures from the China Film Administration show that 1,037 movies were produced domestically last year. However, the top 10 took 28.57 billion yuan, or 44.4 percent of the box office tally for the entire year, indicating that a majority of filmmakers behind small-and middle-budget movies have been struggling to survive.

Rao, from the China Film Critics Association, said: "A film usually needs two to three years' preparation. So, most of the runaway hits last year received their financing in 2017 or even earlier, when the market was more prosperous and attractive to cash-rich investors.

"Blockbusters in 2019 received more positive feedback and online praise than those in the recent past, showing that Chinese filmmakers are putting more effort into seeking breakthroughs in quality and storytelling, and giving us expectations of a promising future."