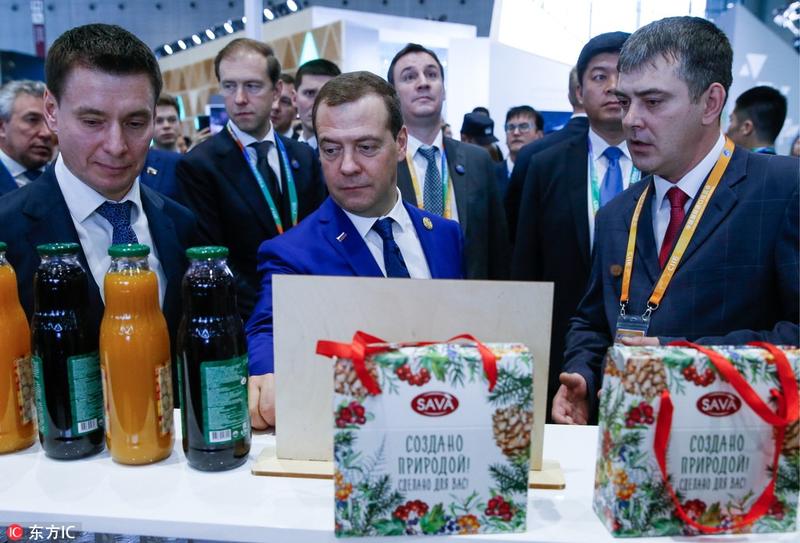 The China International Import Expo has provided strong impetus for increased trade between China and Russia, a Russian official said at the expo on Tuesday, as the country looks to better facilitate growth of exports to China.

The trade volume between China and Russia reached more than US$77b in the first three quarters of the year, a rise of 25.7% from the same period a year before

"It (CIIE) is a serious opportunity for Russian companies to make themselves known, to demonstrate their goods to potential importers and consumers," said Andrey Slepnev, general director of the Russian Export Center Group, a government-owned institute that supports exports.

Speaking during a news briefing on the sidelines of CIIE, Slepnev said the expo has already shown that it is a world-class event by its scale and the number of political and business leaders in attendance.

The Russian delegation is led by Prime Minister Dmitry Medvedev. After the expo opened on Monday, he briefed President Xi Jinping at the Russian pavilion about the achievements of the two nations in the fields of nuclear power, natural gas and aviation.

At a later meeting with Medvedev on Monday, Xi said China and Russia should continue to deepen cooperation in many areas, including energy, agriculture, finance, science and innovation.

The trade volume between China and Russia reached more than US$77 billion in the first three quarters of the year, a rise of 25.7 percent from the same period a year before, the Ministry of Commerce said.

The rate of growth is the fastest among all of China's main trading partners, and the bilateral trade volume is expected to reach US$100 billion this year, the ministry said.

Slepnev said more than 100 Russian companies are taking part in the expo, and many signed cooperative agreements with their Chinese counterparts, mostly in the services and transport sectors, in the first two days.

The expo has made it much easier and transparent for businesses to strike deals because it reduces intermediary procedures, and it allows foreign businesses to appreciate China's competitive environment and become acquainted with manufacturers from other countries.

Slepnev noted that Russia has seen strong export growth to China since the start of the year, especially in forestry, steel and food products, and there has also been strong interest from Chinese buyers in Russian skin care, cosmetics and children's products.

As part of efforts to increase Russian exports to China, the export center group will establish trade offices in Beijing and Shanghai, along with agencies in more than 20 cities nationwide to better serve Russian companies, he said, adding that the group will also help more Russian companies to pitch products via China's booming e-commerce platforms.