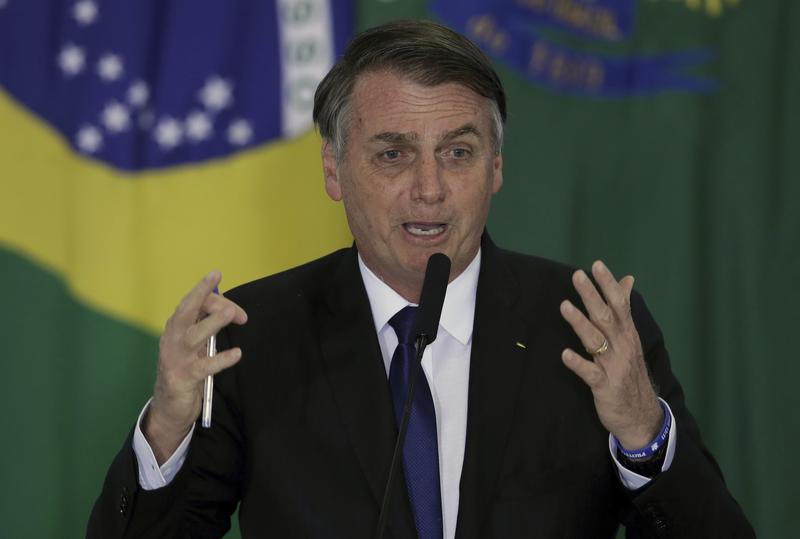 Brazil's President Jair Bolsonaro speaks during a ceremony where he signed a second decree that eases gun restrictions, during the signing ceremony at Planalto presidential palace in Brasilia, Brazil, May 7, 2019. (ERALDO PERES / AP)

RIO DE JANEIRO — After backing out of hosting the 2019 UN climate summit, Brazil has now canceled a United Nations climate change event that was to be held in August in the city of Salvador.

The Environment Ministry said the canceled climate event was conceived by a previous administration as a part of the UN's COP25 conference, which Brazil pulled out of hosting late last year, citing budget reasons

The decision that came to light Tuesday was the latest blow to climate change consensus by the new government of far-right President Jair Bolsonaro.

The Environment Ministry said the event was conceived by a previous administration as a part of the UN's COP25 conference, which Brazil pulled out of hosting late last year, citing budget reasons.

Environment Minister Ricardo Salles has called climate change a "secondary issue" and says he wants to focus on everyday problems like sanitation.

"It's very bad for Brazil's image," Fraga told The Associated Press. "It's sad to see Brazil losing an opportunity to be a leader in the world's fight against climate change."

He said local governments in Brazil will continue to make efforts against climate change even if the federal government is not behind them.

"They say they want to focus on urban issues, but anyone with the minimum amount of knowledge about science and climate would know that urban environmental issues, like sanitation, clean waterways, trash collection, have everything to do with climate change," Fraga said.

In a recent radio interview, the environment minister said he was more interested in dealing with the problems that affect Brazilians who aren't concerned about "climate change in Paris" or "meetings in Stockholm."

"They think I'm going to stop everything in the ministry for seminaries and give money to NGOs to do studies? That's what they want!" Salles said.

Under Bolsonaro, the Environment Ministry no longer has authority over Brazil's water agency and forestry service and it has eliminated three undersecretary positions, including one on climate change.

One of them, Rubens Ricupero, said the government's environment policies are "irrational."

"We never thought we'd see such a malevolent and destructive effort towards something Brazil has constructed for such a long time," he said.