Iran protests point to turmoil in the future 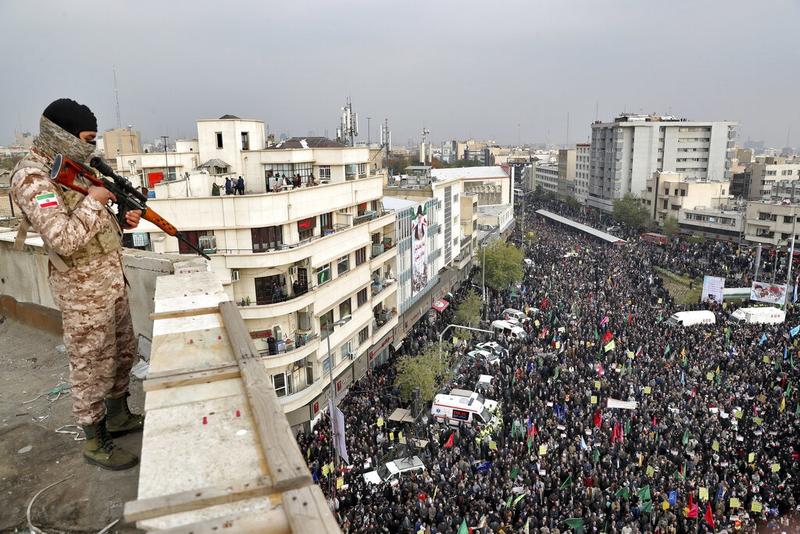 DUBAI, United Arab Emirates — Even among hard-liners in Iran, there seems to be an acknowledgment of one fact after widespread protests, violence and a security force crackdown following a spike in government-set gasoline prices: This will not be the last time demonstrators come out on the street.

The protests that struck some 100 cities and towns across Iran beginning Nov 15 came after Iran raised minimum gasoline prices by 50% to 15,000 rials per liter

As Iran struggles under crushing US sanctions following President Donald Trump’s unilateral withdrawal of America from Tehran’s nuclear deal with world powers, its elected civilian government and those in its Shi'ite theocracy will face ever-tougher decisions on where to cut costs.

Those cuts will more than likely target its vast system of government subsidies that make life affordable for its poor, from low-cost electricity in their homes to the bread on their plates. Any move to increase those prices will draw further protests. But the government may not have any other option.

The protests that struck some 100 cities and towns across Iran beginning Nov 15 came after Iran raised minimum gasoline prices by 50% to 15,000 rials per liter. That’s 12 cents a liter, or about 50 cents a gallon. After a monthly 60-liter quota, it costs 30,000 rials a liter. That’s nearly 24 cents a liter or 90 cents a gallon. An average gallon of regular gas in the US costs US$2.58 by comparison, according to AAA. 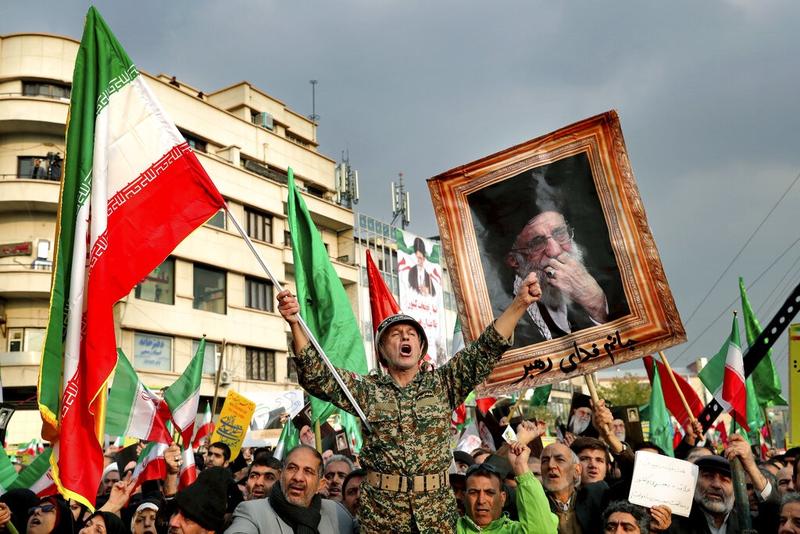 In a Nov 25, 2019, photo, a demonstrator chants slogans while holding up an Iranian national flag during a pro-government rally in Tehran, Iran, denouncing violent protests over a government-imposed fuel price hike. (EBRAHIM NOROOZI / AP)

Cheap gasoline is practically considered a birthright in Iran, home to the world’s fourth-largest crude oil reserves despite decades of economic woes since its 1979 Islamic Revolution. Gasoline there remains among the cheapest in the world, in part to help keep costs low for its underemployed, who often drive taxis to make ends meet.

Iran’s per-capita gross domestic product, often used as a rough sense of a nation’s standard of living, is just over US$6,000, compared to over US$62,000 in the US, according to the World Bank. That disparity, especially given Iran’s oil wealth, fueled the anger felt by demonstrators.

Iran’s government, however, likely saw little choice in trying to push through changes to its gasoline subsidies. Iran spent US$26.6 billion on oil subsidies in 2018, according to the Paris-based International Energy Agency, the most of any country in the world. Iran spent 15% of its overall GDP, or US$69.2 billion, that year on oil, electricity and natural gas subsidies.

Keeping gas costs low also benefits the wealthy, as well as those who smuggle Iranian fuel into other countries.

US sanctions, re-imposed by Trump, largely have stopped Iran from selling its crude oil abroad, cutting into a crucial source of government income. While Iranian President Hassan Rouhani pledged the money saved from cutting gasoline subsidies would go to the poor, Tehran also needs to cut back spending in order to weather the sanctions.

Already, Iranians have seen their savings chewed away by the rial’s collapse from 32,000 to US$1 at the time of the 2015 atomic accord to 126,000 to US$1 today. Daily staples also have risen in price. 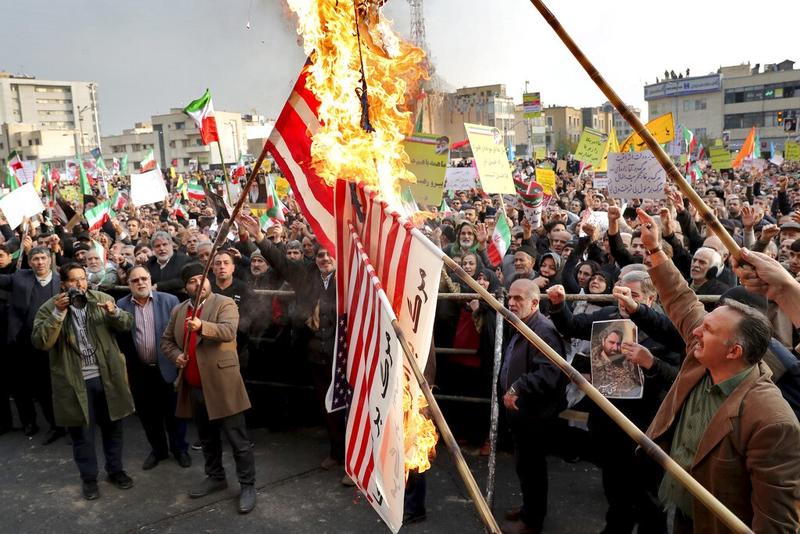 Even with the hike in gasoline prices, Iran still subsidizes fuel costs. Its economy remains largely state-planned despite privatization efforts. Among other major subsidies are bread and wheat, diesel fuel, heating oil and electricity.

Iran’s minister of industry and trade, Reza Rahmani, pledged Tuesday that prices will not be increased through the end of the current Iranian year on March 21. However, the gasoline prices came suddenly and without warning overnight, signaling further cuts likely would follow the same way in order to try and control the outcry.

The scale of the gasoline price demonstrations remains unclear even today as Iran so far has not offered nationwide statistics for the number of people arrested, injured or killed in the protests. Amnesty International believes the protests and the security crackdown killed at least 143 people.

One Iranian lawmaker said he thought that over 7,000 people had been arrested, while the country’s interior minister said as many as 200,000 people took part in the demonstrations.

Protesters attacked over 700 banks, smashing ATMs and setting some ablaze

While demonstrators attacked gas stations, the target of choice appeared to be banks. Protesters attacked over 700 banks, smashing ATMs and setting some ablaze, Interior Minister Abdolreza Rahmani Fazli said. That anger doesn’t come as a surprise. In recent years, banks burdened by bad debts or circled by corruption allegations have collapsed in Iran, sparking sporadic protests by depositors who lost their money. Some of those banks had ties to powerful people within Iran, leading to allegations of cronyism.

Supreme Leader Ayatollah Ali Khamenei called those who attacked the banks “thugs” in his first comments on the demonstrations. His website published a cartoon showing masked rioters attacking a bank, while another frame showed a family and an elderly man with a cane peacefully waiting to withdraw money from an ATM. 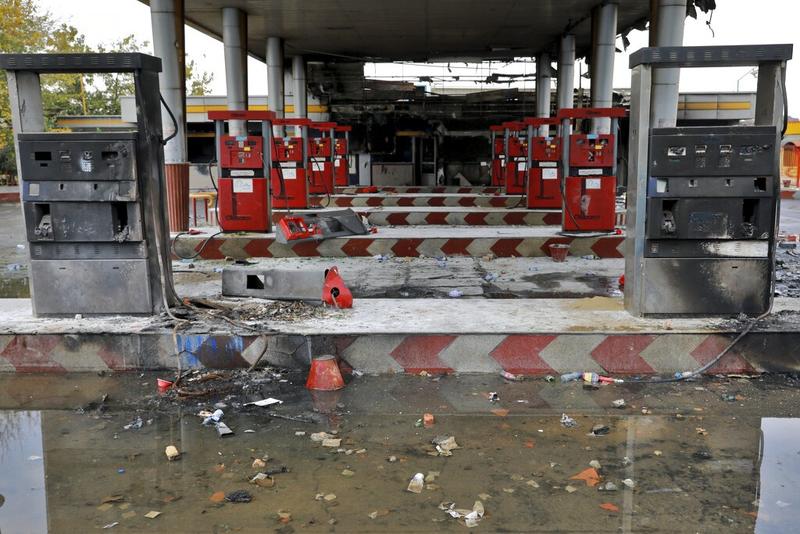 In this Nov 20, 2019, photo, rainwater pools at a gas station attacked during protests over government-set gasoline prices in Tehran, Iran. (EBRAHIM NOROOZI / AP)

“Setting fire to such and such bank is not the action of the people, it is the action of thugs,” Khamenei said, according to his website. “These acts of sabotage do not solve any problem. In fact, they add insecurity to the problems that exist.”

However, bank attacks were widespread in 1978 in the months ahead of Shah Mohammad Reza Pahlavi’s abdication and the Islamic Revolution. Marxists who hated capitalism, Islamists who opposed usury rates and others taking advantage of the chaos ransacked hundreds of banks, angry over corruption. The Iranian economy nosedived as money flooded out of the country.

The revolution saw millions on the street, something not seen in these recent protests. However, these demonstrations turned violent in the span of a day, showing the danger looming ahead for Iran’s government as it likely faces further hard choices ahead as sanctions look unlikely to be lifted as it has begun breaking centrifuges, enrichment and stockpile limitations in the nuclear deal.

"These riots are not the last ones and it definitely will happen in the future," Revolutionary Guard acting commander Gen Ali Fadavi has warned.