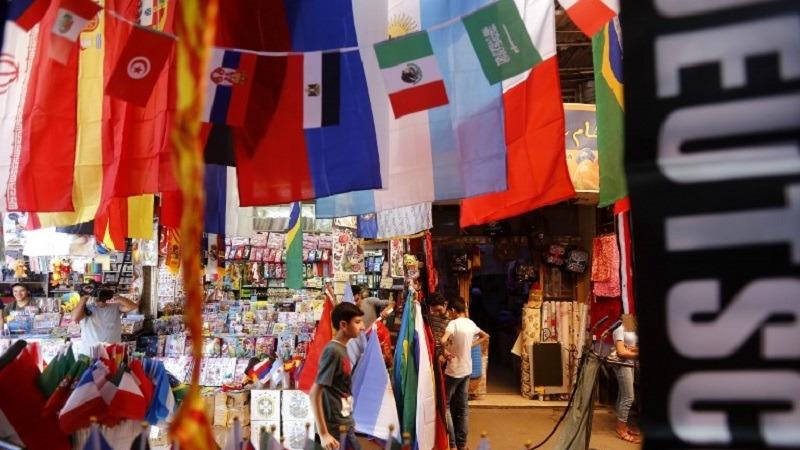 A picture taken on June 7, 2018 shows flags of countries participating in the upcoming 2018 FIFA World Cup on display among other flags outside a vendor's stall to be sold for football supporters and viewers, at a market street in the old city of the Syrian capital Damascus. (LOUAI BESHARA / AFP)

DAMASCUS - In the al-Jahez Park in Syrian capital Damascus, people waved French flags as they were watching the World Cup final between France and Croatia on a giant screen, a sign that the love of football is not affected by the country's deteriorating relations with the West.

The French Embassy in Syria has for long closed amid rising tension between Damascus and the West as a result of the Syrian war.

On top of that, France took part in a wide-scale offensive alongside the United States and Britain on Syrian military sites last April.

The Syrian government repeatedly accused France of supporting the terrorist groups in Syria, while Paris has accused the administration of Syrian President Bashar al-Assad of carrying out chemical attacks in rebel-held areas in Syria.

But the tension could not stop French football fans in Syria from raising the French flags, which have disappeared from any diplomatic representation in Syria.

Some die-hard fans even painted the blue-white-red flags on their faces, while some others wore blue wigs and chanted for their favorite team during the match.

Little children also joined the football craze and cheered for the French team.

Most of the audience were cheering for France, while some others supported the Croatian team "because they play well."

He said football and sports are different from politics because "it is a game loved by millions around the world and I personally support the skilled football players." 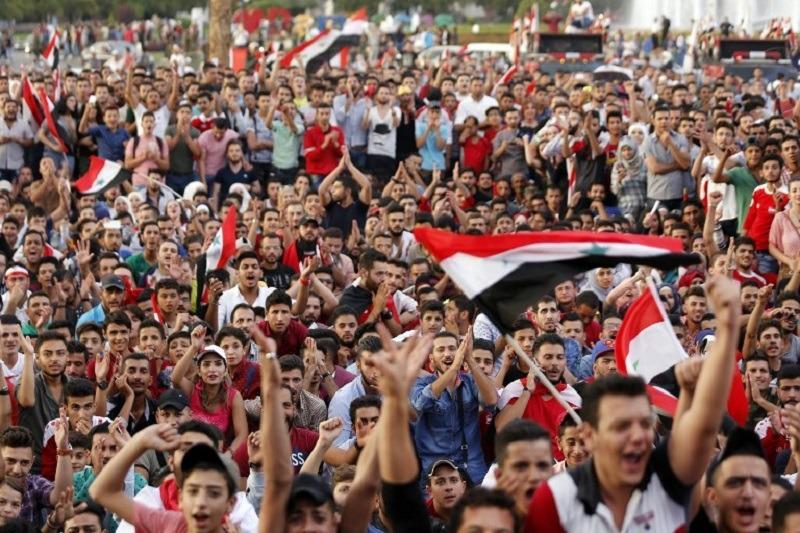 Syrians waving their national flag react as they watch a live broadcast of the first leg of the FIFA World Cup 2018 qualifier football match between Syria and Australia in Damascus' Umayyad Square on Oct 5, 2017. (LOUAI BESHARA / AFP)

Sami, wearing a blue wig and a pair of blue-tinted sunglasses, said he has supported the French team since 1998 "because the team is very good and no matter who comes to train them, they do very well and they are smart."

Jaber was watching the game with his daughter, who, he said, had expected the French team to reach the finals.

"I personally don't support any team, but I came here today because my daughter loves the French team and she had a hunch that the French would reach the finals," he told Xinhua.

Most of those watching the game seemed separated from any politics, as all they talked about was the technics of the game and how the players are coordinating their moves.

Yasser said cheering for a football team of a certain country doesn't mean supporting the country itself.

"Sports and politics are two different things, so I support the French team because I love the game and the good playing technics, but it doesn't mean I support France politically," he said.

Maher, his friend, shared the same opinion, saying "football is like music, I love many American singers and listen to them frequently, but this doesn't mean I support the American foreign policy or what they are doing in our region."

The joyful atmosphere that prevailed the capital throughout the World Cup gave the sentiment that no war has ever happened in Syria and that everything is normal.

This feeling possibly emanates from the tranquil situation in the capital after the war was over in Damascus and its surroundings. It also feels like sports unite people despite all the wars and woes.