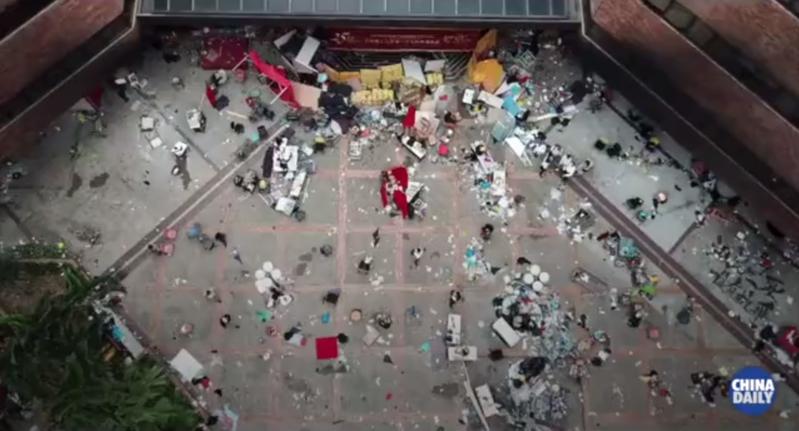 Well, here we are again. The United States continues to run its mouth about the Hong Kong protests, this time in the form of legislation.

The US Senate has just passed what it deemed the "Hong Kong Human Rights and Democracy Act". It was approved by voice vote so an exact tally can't be found, but chances are it would have received broad bipartisan support; being anti-China is, after all, the least risky stance in American politics. The bill is expected to land soon on the desk of President Donald Trump, where it will in all likelihood get his Sharpie signature, to great fanfare. On its face the bill seems innocent enough — who doesn’t like human rights and democracy?

Just as Iran, Chile, Honduras, Haiti, Venezuela and countless other countries have learned, US dedication to "democracy" only lasts as long as you're willing to do its bidding

But the true intentions of this bill are far more sinister than its name lets on. The titular "human rights" and "democracy" are only defended in the text of the bill because they are, according to Section 3, "directly relevant to United States interests." There is no genuine support for human rights or democracy here, or in any other legislation proffered by the US as a means to demonize its enemies. Just as Iran, Chile, Honduras, Haiti, Venezuela and countless other countries have learned, US dedication to "democracy" only lasts as long as you're willing to do its bidding.

READ MORE: US bill on HK infringe on China’s sovereignty

The bill also carries a provision for a yearly review to determine whether Hong Kong has been adequately toeing the US line; in addition to the typical human rights and democracy pabulum, there is language mandating a report to determine whether "United States law relevant to export controls" has been followed and "sanctions imposed by the United States" have been enforced. This would include not only sanctions voted on by international bodies like the United Nations, but also the capricious and punitive sanctions levied on designated enemy nations unilaterally by the US.

Forcing Hong Kong into abiding by sanctions on countries like the Democratic People's Republic of Korea and Iran would mean making the city complicit in the starvation and suffering of millions. US sanctions on Venezuela in one year alone killed more than 40,000 people according to a recent study by the Center for Economic and Policy Research. That's some commitment to human rights!

Successful implementation of this bill would push Hong Kong into the US umbrella, allowing arbitrary decisions by hostile forces to determine the city's status

Successful implementation of this bill would push Hong Kong into the US umbrella, allowing arbitrary decisions by hostile forces to determine the city's status. This would effectively turn the Chinese territory into a tiny comprador state, strong-armed into following US policy objectives no matter what the people themselves might want. This is textbook neocolonialism, yet the most militant protesters seem to welcome it gladly. They appear to want their own sovereignty transferred — from a country built out of decades of anti-colonial struggle to the foremost exploiter nation in the world today. Bizarrely, these protests are applauded by many "progressives" in the West. Against all evidence, they believe the militants are looking out for all people and not just themselves.

This couldn't be further from the truth. If the protesters wanted the support of the city's working class they would be making real working-class demands. Cost of living has skyrocketed, and income divides are more pronounced than ever. A permanent underclass of migrant laborers lives in penury while a wealthy elite thrives. But the protesters have no interest in their plight — what they want is Western-style bourgeois democracy, which puts no food on tables or a roof over anyone's head. This is painfully obvious to anyone who's had to work for a living in "democracies" like the US, which the protesters so idolize; decades of "elections" in which participants get a nominal say haven't ended poverty or guaranteed a livable wage.

A Western-style system will not bring the change Hong Kong needs. It will satisfy the protesters, who will go back to their comfortable enclaves while their domestic "helpers" continue toiling for a pittance. But the privileged few playing dress-up were never really in danger, no matter how badly the corporate media wanted the world to believe they were. The inequalities squeezing the working class barely affect the protest set. Perhaps their apartments will lose some square footage, but that's a minor inconvenience in the grand scheme of things.

They'd have their phony elections, and for them that would be enough. They'd be content with this even if it meant being under the thumb of the US — the sham democracy to end all sham democracies, where election seasons last forever, everyone talks about politics but no matter the results the poor suffer just as they did before.

These protests are angrily, violently demanding a system where, as Vladimir Lenin put it over a century ago, "the oppressed are allowed once every few years to decide which representatives of the oppressing class shall represent and repress them." Is that revolution? Is that progress?

Decidedly not. But this is the outcome the rowdiest protesters insist on with methods that do nothing to win over the masses. These methods have the appearance of radicalism, the aesthetic of a mass movement, but are in reality an attempt to claw back progress the city has made since its rightful return to China.

Willingly giving up economic autonomy to the US is an embrace of colonialism in all but name; stringent adherence to US export law and compelling the city to take part in sanctions or be sanctioned itself will put Hong Kong squarely in the Western orbit. It would become a base by which the West could continue to chip away at China's independence and sovereignty.

Divide-and-conquer is an old stratagem from the imperial playbook — and with this bill soon on its way to the White House, it looks like little has changed since the old "gunboat diplomacy" days.

Except maybe the frilly collars.

The author is a writer with China Daily.

The opinions expressed here are those of the writer and do not represent the views of China Daily and China Daily website.