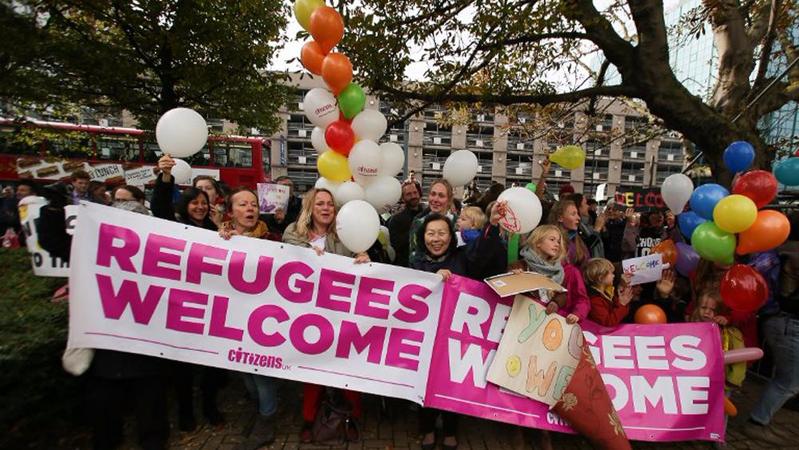 Demonstrators welcome a coach carrying teenagers as it arrives in Croydon, south London after being transferred from the "Jungle" migrant camp in Calais on Oct 21, 2016. A leaked government document said that Britain is considering measures to restrict immigration for all but the highest-skilled EU workers. (DANIEL LEAL-OLIVAS / AFP)

LONDON – Immigration is good for Britain but the public want to see it controlled as the country leaves the European Union because of the impact it can have, particularly on those on low incomes, Prime Minister Theresa May said on Wednesday.

A leaked government document showed Britain is considering measures to restrict immigration for all but the highest-skilled EU workers, plans some companies called alarming and an opposition lawmaker described as "plainly cruel".

She added: "There is a reason for wanting to ensure that we can control migration. It is because of the impact that that migration can have ... on people, on access to services, on infrastructure, but crucially it often hits those at the lower end of the income scale hardest."

Large flows of migrants from the European Union were one of the reasons some Britons said they voted to leave the bloc in a referendum last year, with one of the Brexit campaign's main slogans saying Britain should "take back control".

But companies, especially those in the catering, social care and retail industries which depend on the steady stream of workers from abroad, say they fear a restrictive immigration policy after Britain leaves the EU will leave them unable to hire the staff they need.

In the document, leaked to the Guardian newspaper and marked 'draft – official sensitive', the interior ministry said Britain was changing its focus to make sure, where possible, British companies take on British workers rather than migrants.

"Put plainly, this means that, to be considered valuable to the country as a whole, immigration should benefit not just the migrants themselves but also make existing residents better off," the document said.

A government spokesman said the government did not comment on leaked draft documents.

"We will be setting out our initial proposals for a new immigration system which takes back control of the UK's borders later in the Autumn," he said.

The government has also said it would listen to the results of a year-long study it commissioned in July from the Migration Advisory Committee to look at the impact of migration and how best to control it after Brexit.

Some of the measures are in keeping with earlier statements from interior minister Amber Rudd, who has said that Britain would have to work out a balance between the numbers needed by companies and a level which does not put pressure on public services, such as hospitals and schools.

That message was reinforced by Defense Secretary Michael Fallon on Wednesday, when he said the government would pursue a balanced immigration policy.

The document described the proposals as "a platform for discussion" and the Guardian said it had not been agreed with Prime Minister Theresa May's top team of ministers, who are divided as the best way to control immigration.

It proposes that while highly-skilled workers could get a work permit lasting three to five years, lower skilled workers may only be allowed to work in Britain for two years to limit the number "of EU citizens able to come to the UK".

The changes would be introduced over time, and the government could place tough new restrictions on EU citizens' rights to bring in family members, it said.

The proposed measures stung some employers, with Ian Wright, director general of the Food and Drink Federation, saying that if they reflect the government's thinking it shows "a deep lack of understanding of the vital contribution that EU migrant workers make – at all skill levels – across the food chains".

"Food and drink manufacturing, Britain's largest manufacturing sector, will be alarmed by the proposals," he said in a statement.

Caroline Lucas, co-leader of the Green Party, criticized the plan as not "just economically illiterate, it's plainly cruel too", while London Mayor Sadiq Khan said it was "a blueprint on how to strangle our economy".

But for Brexit supporters, it was "a great step in the right direction for the UK to take back control of its borders".

"The government is right to prioritize highly skilled and skilled migration," said Steven Woolfe, a former member of the anti-EU UK Independence Party and a lawmaker in the European Parliament.

"Brexit Britain should continue to attract the brightest and best, whilst establishing strict control of unskilled labor."

May, who as Britain's interior minister was in control of immigration for six years before becoming prime minister, has said that free movement of labor would have to end when Britain leaves the European Union and has long aimed to bring down immigration to the tens of thousands.

Data in August showed net migration to Britain fell to its lowest level in three years in the 12 months to the end of March, with more than half the drop caused by EU citizens leaving and fewer arriving since the Brexit vote.

But, at 246,000, the figure is far higher than what May describes as "a sustainable level of migration".