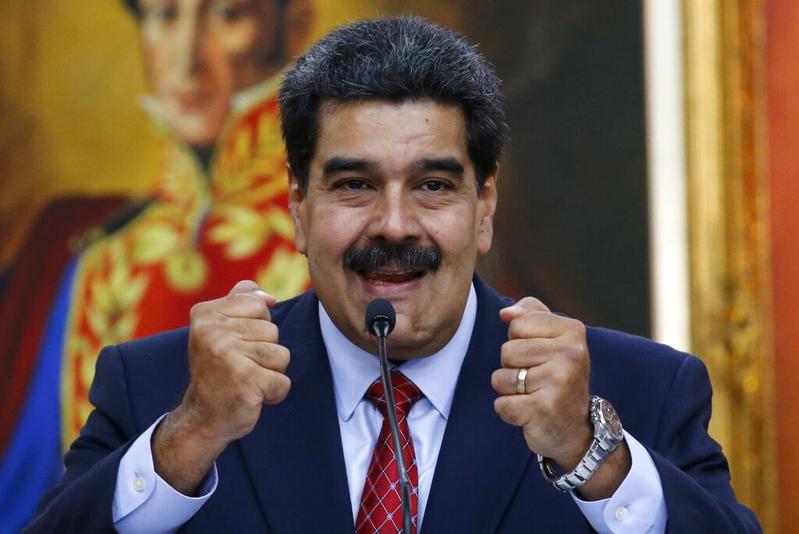 Venezuelan President Nicolas Maduro holds up his fists during a press conference at Miraflores presidential palace in Caracas, Venezuela, Jan 25, 2019, amid a political power struggle with an opposition leader who has declared himself interim president. (ARIANA CUBILLOS / AP)

CARACAS — Venezuela defused a potential showdown with the United States, suspending a demand that US diplomats leave the country as Washington called on the world to "pick a side" in the South American nation's fast-moving crisis.

President Nicolas Maduro broke relations with the United States on Wednesday after the Trump administration and many other nations in the region recognized opposition leader Juan Guaido as Venezuela's interim president, a move that Maduro called a coup attempt.

Maduro gave US diplomats three days to leave the country, but the Trump administration said it wouldn't obey, arguing that Maduro is no longer Venezuela's legitimate president. That set the stage for a showdown at the hilltop US Embassy compound Saturday night, when the deadline was to expire.

In the UN Security Council meeting, critics and supporters of Maduro's government faced off in a reflection of the world's deep divisions over Venezuela

But as the sun set on Venezuela's capital, the Foreign Ministry issued a statement saying Maduro's government was suspending the expulsion to provide a 30-day window for negotiating with US officials about setting up a "US interests office" in Venezuela and a similar Venezuelan office in the United States. The US and Cuba had a similar arrangement for decades before the Obama administration restored diplomatic relations with the communist-run island.

The State Department did not confirm the Venezuelan government's account, reiterating only that its priority remains the safety of its personnel and that it has no plans to close the embassy.

Earlier Saturday, Secretary of State Mike Pompeo told the UN Security Council: "Let me be 100 percent clear — President Trump and I fully expect that our diplomats will continue to receive protections provided under the Vienna Convention. Do not test the United States on our resolve to protect our people."

In the Security Council meeting, critics and supporters of Maduro's government faced off in a reflection of the world's deep divisions over Venezuela, which is mired in political confrontation as well as an economic collapse that has caused millions to flee the country.

During the debate, which was requested by the US, Pompeo urged all nations to end Venezuela's "nightmare" and support Guaido.

"Now is the time for every other national to pick a side," Pompeo said. "No more delays, no more games. Either you stand with the forces of freedom, or you're in league with Maduro and his mayhem." 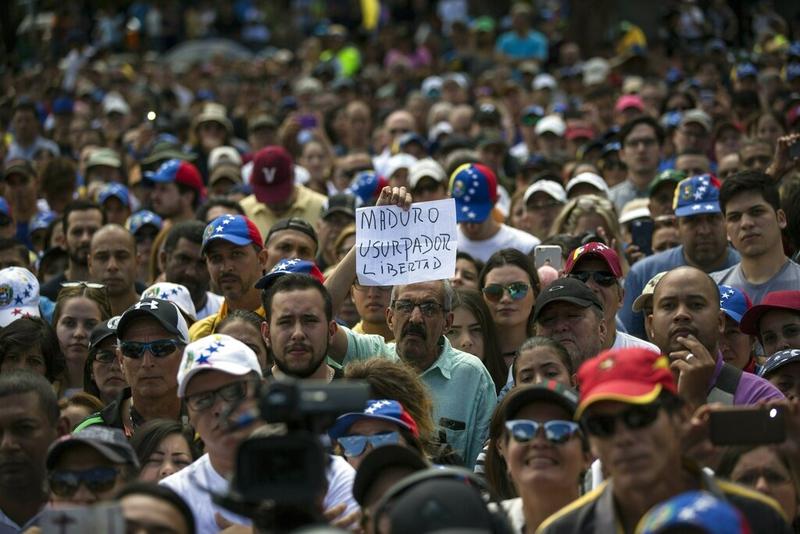 A man holds a sign with a message that reads in Spanish: "Maduro, Usurper. Freedom" during an opposition rally in Las Mercedes neighborhood of Caracas, Venezuela, Jan 29, 2019. (RODRIGO ABD / AP)

Russian Ambassador Vassily Nebenzia charged that the Trump administration is trying "to engineer a coup" against Maduro. He said Venezuela doesn't threaten international peace and security, and he accused "extremist opponents" of Maduro's government of choosing "maximum confrontation," including the artificial creation of a parallel government.

Nebenzia urged Pompeo to say whether the US will use military force.

Pompeo later told reporters who asked for a response, "I am not going to speculate or hypothesize on what the US will do next."

Pompeo was accompanied to New York by Elliott Abrams, who was named a day earlier as the US special representative for Venezuela. Abrams is a former assistant secretary of state for Latin America who worked at the White House when a 2002 coup in Venezuela briefly ousted Maduro's predecessor, the late Hugo Chavez.

The Security Council, the UN's most powerful body, has not taken action on the Venezuelan crisis because of the divisions. The Security Council's five veto-holding permanent members could not unite behind a statement on Venezuela, presenting widely differing texts.

The leaders of two of those council nations — France and Britain — joined Spain and Germany to turn up the pressure on Maduro, saying Saturday that they would follow the US and others in recognizing Guaido as president unless Venezuela calls a new presidential election within eight days.

The European Union's foreign policy chief, Federica Mogherini, said that if there is no announcement of a new election in the next days, the 28-nation bloc "will take further actions, including on the issue of recognition of the country's leadership."

Venezuelan Foreign Minister Jorge Arreaza dismissed the deadline. "Europe is giving us eight days?" he asked the council. "Where do you get that you have the power to establish a deadline or an ultimatum to a sovereign people. It's almost childlike." 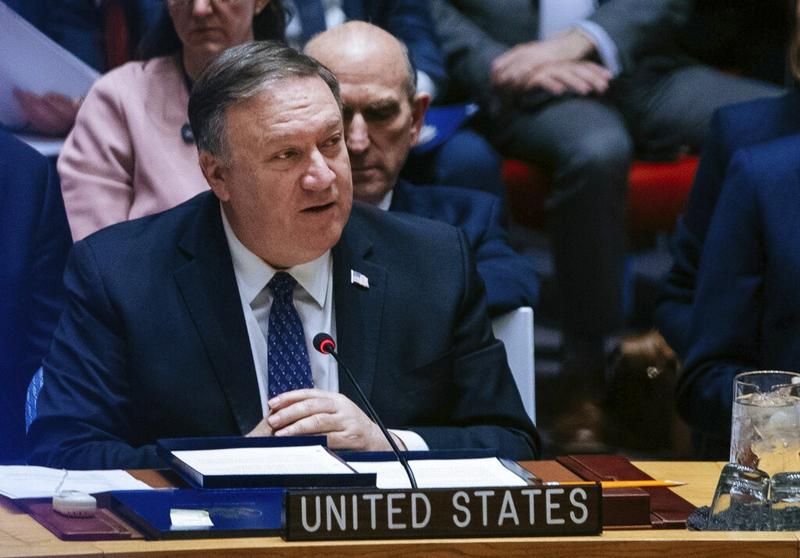 US Secretary of State Mike Pompeo speaks at the United Nations Security Council at the UN Headquarters, Jan 26, 2019. Pompeo encouraged the council to recognize Juan Guaido as the constitutional interim President of Venezuela. (KEVIN HAGEN / AP)

Arreaza asked that someone show him where in Venezuela's constitution it says an individual can proclaim himself president.

Guaido says he is acting in accordance with two articles of the constitution that give the National Assembly president the right to hold power temporarily and call new elections.

While the council debated, a man identifying himself as Venezuela's military attache in Washington posted a video saying he had broken with Maduro and now would report to Guaido.

"The armed forces have a fundamental role to play in the restoration of democracy," Col. Jose Luis Silva said in the video, which he said was shot at his office in the Venezuelan Embassy in Washington, sitting in front of the nation's red, blue and yellow flag.

He called on other members of the military to join him in supporting Guaido, saying they need to avoid "attacking" protesters whose only aim is to feed themselves.

"We welcome him and everyone who with honesty want to follow the constitution and the will of the Venezuelan people," he said on social media after attending a small assembly in Caracas to discuss the opposition's next moves.