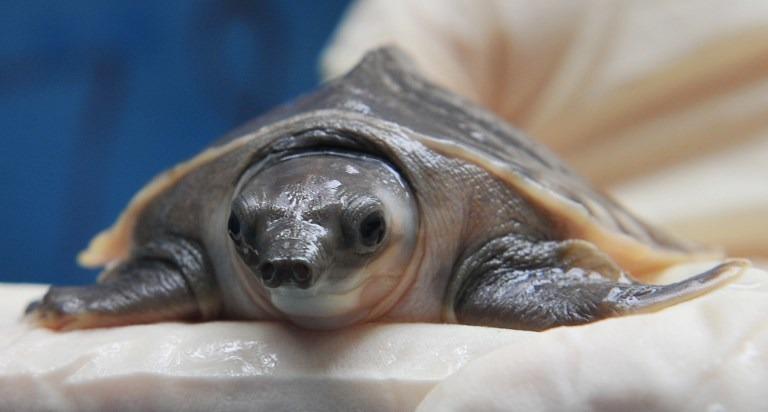 BEIJING — From campaigns to reject wildlife products, to the celebrated "retirement" of two belugas from aquariums, Chinese society has been making positive efforts in protecting the world's marine biodiversity.

World Wildlife Day 2019, which fell on March 3, aims to "raise awareness about the extraordinary diversity of marine life and the crucial importance of marine species to sustainable development," according to Antonio Guterres, UN secretary-general.

Two belugas named "Little White" and "Little Grey" will embark on a 6,000-mile journey to be released in the world's first beluga sanctuary in Iceland.

Chinese actor Eddie Peng joined WildAid, a non-profit organization which focuses on reducing market demand for endangered species products, to call for more people in China to play their part in protecting the oceans and endangered sea turtles.

"Don't be fooled by the beauty of hawksbill products, because they all come from illegal and devastating trade," said Eddie Peng in the campaign video. "This natural beauty belongs in the ocean."

He urged the Chinese public to reject illegal marine products such as tortoiseshell even when they are disguised as travel souvenirs.

The huge declines of the sea turtle population in recent decades is among the consequences of habitat loss, bycatch, pollution as well as illegal trade in their eggs, meat and shells, said Steve Blake of WildAid in China.

"We all need to act fast to help reverse these alarming trends," he said. "There are simple things we can all do such as reducing the amount of plastic we use and saying no to all illegal marine products, especially from sea turtles."

In 2017, over 2000 pieces of green sea turtle and tortoise products were confiscated in four southern regions of Guangxi, Guangdong, Hainan and Fujian.

With greater efforts in raising awareness and strengthening protection, the species could stand a better chance of surviving and recovering, according to Blake.

Regarding plastic pollution, another severe threat that sea turtles and all marine life are facing, the southernmost Chinese province of Hainan announced a total ban on single-use, non-degradable plastic last month, marking the first step of China's wholesome effort to mitigate the environmental impacts of hazardous waste.

After 15 years living in captivity and performing at a Chinese aquarium, two belugas named "Little White" and "Little Grey" will embark on a 6,000-mile journey to be released in the world's first beluga sanctuary in Iceland.

The date of their departure will not be disclosed but it will certainly happen this spring, sources with Shanghai Chang Feng Ocean Park confirmed.

The sanctuary on the island of Heimaey, one of the Westman Islands, located off the southern coast of Iceland, will be created at Klettsvik Bay -- a large natural sea inlet and beautifully secluded coastal area, said Shen Yi, Marketing and Sales Director of Merlin Entertainments in China, parent of the ocean park.

With attentive care provided by a team of conservation experts, Little White and Little Grey will hopefully be able to enjoy an enhanced quality of life in an environment closer to their natural Arctic habitat, she said.

The release of the belugas is seen as a ground-breaking marine mammal welfare project between Sea Life Trust, a charity established by Merlin Entertainments in partnership with Whale and Dolphin Conservation.

It is the first time in history that a sanctuary of this kind has been created to rehabilitate captive cetaceans such as whales and dolphins, Shen said.

The two female belugas, aged 19, were captured from the Russian waters as young cubs and sold to China over a decade ago, according to the ocean park.

Now they are going through intensive training to rebuild their swimming and diving abilities to better adjust to the natural environment at the sanctuary.

With the release of the Chang Feng belugas, Merlin Entertainments hopes to offer an effective solution to all cetaceans in captivity inside the aquarium business, Shen said.

"The belugas being released showcased China's increasing awareness of animal welfare and species conservation alongside its building of an ecological civilization," she said.