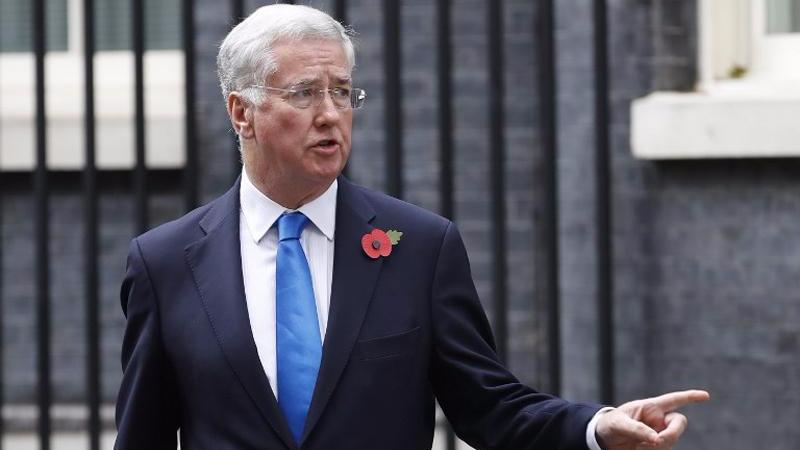 LONDON -- British Defense secretary Sir Michael Fallon was the latest British politician Wednesday to be named in a sexual harassment scandal that has erupted in the Houses of Parliament.

British Prime Minister Theresa May has called for urgent action after a catalogue of complaints of inappropriate behavior by MPs and ministers towards females.

International Trade Minister Mark Garnier is already being investigated after it was revealed he asked his secretary to go to a shop in London's "sex" quarter of Soho to buy two sex toys.

Fallon's name has now been drawn into the debate after national newspapers told how he had touched the knee of a well-known female broadcaster and columnist.

The "victim" of that incident, Julia Hartley-Brewer, responded on social media saying: "This 'incident' happened in 2002. No one was remotely upset or distressed by it. My knees remain intact."

Hartley-Brewer told media that she did not consider herself a victim after the incident which happened over dinner at a Conservative Party conference.

The journalist said of the incident: "After the minister kept putting his hand on my knee I calmly and politely explained to him that, if he did it again, I would punch him in the face. He withdrew his hand and that was the end of the matter."

But the harassment debate, dubbed "Pestminster" by the Metro newspaper, has continued to dominate the world of politics.

In a debate in the House of Commons on Monday, Speaker John Bercow said there must be zero-tolerance towards harassment and bullying on the Palace of Westminster estate.

The Leader of the House of Commons, Andrea Leadsom has called for action over the issue within days rather than weeks.

In its on-line platform Tuesday the Daily Telegraph claims a Conservative Minister and an MP have been accused of paying women to be silent in a so-called 'dirty dossier' being shared by party staff.

The newspaper says the new disclosures come amid a growing sexual harassment scandal at Westminster, with some 40 Conservative MPs being named in the 'dossier'. In the list obtained by The Telegraph, seven Cabinet ministers, eight former ministers and 15 other members of the Government are named.