US, Japan step up defense cooperation 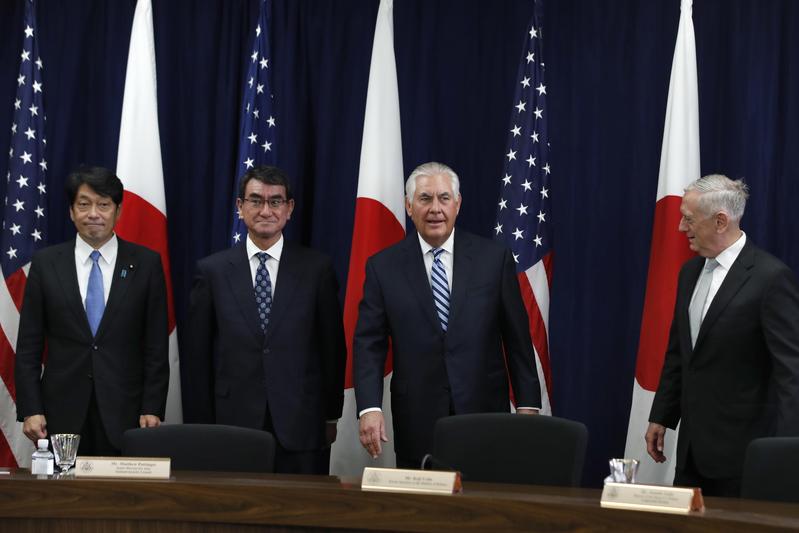 WASHINGTON - The United States and Japan will step up their defense cooperation to deal with the threat from nuclear-armed Democratic People's Republic of Korea (DPRK) as tensions in East Asia remain high, officials from the two allies said on Thursday.

"For this threat of North Korea, at this meeting we agreed to increase the pressure and to strengthen the alliance capability," Japanese Defence Minister Itsunori Onodera said after talks with senior US officials in Washington. DPRK is also referred to as North Korea.

US fears about DPRK's missile and nuclear bomb programs have grown in recent weeks. Pyongyang has said it was considering plans to fire missiles toward the US Pacific territory of Guam, although DPRK leader Kim Jong-un appears to have delayed the decision.

US Defense Secretary Jim Mattis, Secretary of State Rex Tillerson and their Japanese counterparts agreed at a meeting in Washington on Thursday to work more closely on DPRK.

"In light of the threat of North Korea, the four of us confirmed the importance of the unwavering US commitment to extended deterrence," Onodera said.

Tillerson said the United States wanted dialogue with Pyongyang, but only if it were meaningful.

"Our effort is to cause them to want to engage in talks but engage in talks with an understanding that these talks will lead to a different conclusion than talks of the past," he said.

In 2005, DPRK reached an agreement with six countries to suspend its nuclear program in return for diplomatic rewards and energy assistance but the deal later collapsed.

US President Donald Trump warned DPRK last week it would face "fire and fury" if it threatened the United States, prompting Pyongyang to say it was considering plans to fire missiles toward Guam.

Both sides have since dialed back the rhetoric somewhat.

Pyongyang's deputy UN ambassador told United Nations Secretary-General Antonio Guterres this week that its nuclear weapons program will never be up for negotiation as long as the US government's "hostile policy and nuclear threat continue."

Guterres spoke by telephone with Deputy Ambassador Kim In Ryong on Tuesday, the DPRK mission to the United Nations said in a statement on Thursday.

Japan intends to expand its role in its alliance with Washington "and augment its defense capabilities" while the United States "remains committed to deploying its most advanced capabilities to Japan," the State Department said in a statement.

The Japanese Defence Ministry wants to introduce a land-based Aegis missile defense system to address DPRK's missile threats and has decided to seek funding in the next fiscal year to cover the system design costs, a Japanese defense official told Reuters.

Foreign Minister Taro Kono said Japan would strengthen its defense posture in response to the DPRK threat and provide US$500 million to help boost maritime security in East Asia.

Japan is likely to increase its defense spending at a faster pace in its next five-year plan from April 2019 than the annual 0.8 percent average rise in its current mid-term plan, the Nikkei business daily reported on Friday. Defense officials have said such a rise was desirable but finance ministry officials are cautious because of Tokyo's mammoth public debt.

DPRK has repeatedly threatened to target Japan, which hosts around 54,000 US military personnel, as well as ROK and the United States with its missiles.

DPRK missiles would have to fly over Japan to reach the Guam area, worrying Tokyo that warheads or missile debris could fall on its territory.

The US and ROK will go ahead with joint military drills next week, the top US military official said on Thursday.

The drills involving tens of thousands of US and Republic of Korea (ROK) troops are due to begin on Monday. DPRK views such exercises as preparations to invade it.

Joseph Dunford, chairman of the US Joint Chiefs of Staff, said the exercises were "not currently on the table as part of the negotiation at any level".

Easing tensions this week, DPRK media announced that Kim delayed a decision on firing four missiles toward Guam, home to a US air base and Navy facility. Trump welcomed the delay as "very wise."