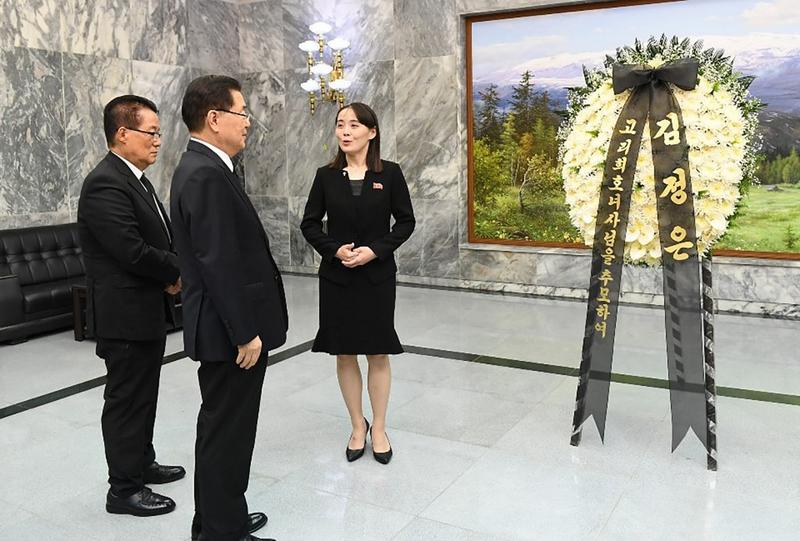 SEOUL – The Democratic People’s Republic of Korean leader Kim Jong-un's sister met Republic of Korean officials on their heavily defended border on Wednesday to deliver flowers and her brother's condolences over the death of a former ROK first lady.

The sister, Kim Yo-jong, visited the border village of Panmunjom in the demilitarized zone separating the two Koreas to pay her respects to Lee Hee-ho, the widow of former ROK president Kim Dae-jung, a ROK official said.

Lee died in the ROK capital, Seoul, on Monday.

She (Kim Yo-jong) said she hopes the South and the North will continue cooperation, upholding Ms Lee Hee-ho's resolve for reconciliation and cooperation between the people

ROK officials said Kim Yo-jong, who has emerged over the past 18 months as a top aide to her brother, did not have any particular message or letter for ROK President Moon Jae-in. The two sides talked for about 15 minutes.

"She said she hopes the South and the North will continue cooperation, upholding Ms Lee Hee-ho's resolve for reconciliation and cooperation between the people," ROK's national security adviser, Chung Eui-yong, told reporters.

"Today, she focused on cherishing the deceased and sharing condolences."

Moon's press secretary told a separate briefing that Kim Yo-jong also said her brother had a "special feeling" towards Lee.

Kim Yo-jong's visit came exactly a year after her brother and US President Donald Trump agreed at the first US-DPRK summit in Singapore to work towards the denuclearization of the Korean peninsula, easing fears of war.

Those talks have since stalled and inter-Korean engagement has dwindled.

Kim Dae-jung, president from 1998 to 2003, is known for championing a so-called Sunshine policy of engagement with the DPRK. Last year's detente between the two Koreas was seen as a revival of that policy.

The DPRK and ROK are technically still at war because their 1950-53 conflict ended in a truce, not a peace treaty.

Last year saw a number of high-level meetings between South and North, including three summits between Kim Jong-un and ROK President Moon Jae-in.

Kim Yo-jong visited the ROK for the Winter Olympics in February 2018 and also accompanied her brother on the summits.