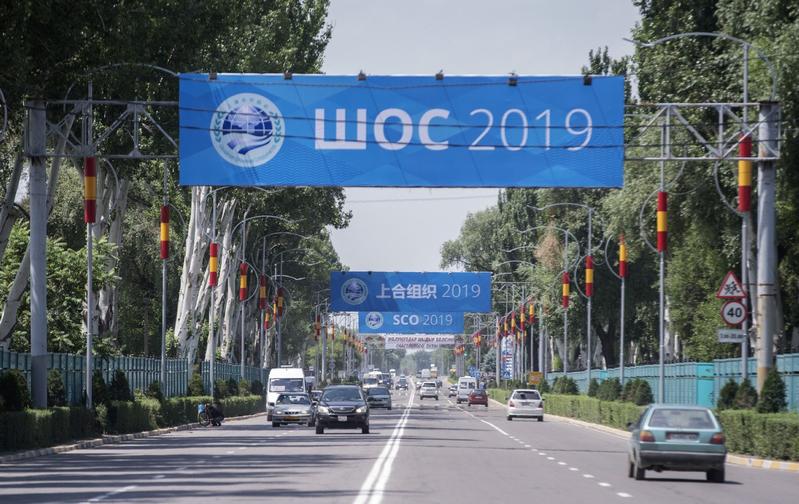 This photo taken on June 9, 2019, shows banners for the Shanghai Cooperation Organization (SCO) summit on a street in Bishkek, capital of Kyrgyzstan. The 19th meeting of the Council of Heads of State of the SCO will be held in Bishkek on June 13-14. (PHOTO / XINHUA)

BEIJING — Situated along rivers and beside mountains, Bishkek, capital of Kyrgyzstan and host of this year's Shanghai Cooperation Organization (SCO) summit, used to be a key juncture along the ancient Silk Road.

The historical trade routes snaked through the Central Asian country for centuries, witnessing and facilitating commercial and cultural exchanges between the East and the West.

Today, the Belt and Road Initiative (BRI), proposed by China and inspired by the historical link, has offered Bishkek a new opportunity to rejuvenate its old glory in global trade. The city has now become an economic partner with China's eastern port of Qingdao, host of last year's SCO summit.

Over the years, the organization has made strides in bolstering security cooperation among its members, including combating the "three forces" of terrorism, separatism and extremism, as well as in cracking down on transnational organized crime across the region.

After 18 years of growth, the SCO has now matured under the guidance of the Shanghai Spirit, which features mutual trust, mutual benefit, equality, consultation, respect for cultural diversity and pursuit of common development.

The SCO has expanded from a six-member group when it was founded in 2001 to one of the world's most important multilateral platforms that, in addition to tackling shared security problems in the region, also seeks to promote economic development and people-to-people exchanges.

Robust and sustainable economic and social development is key to fundamentally addressing security challenges. The BRI, now in its sixth year, can bring the SCO members both the "Belt" of security and "Road" to development in the face of rising trade protectionism and economic nationalism to achieve lasting stability and common prosperity.

Spreading across the Eurasian continent, the now eight-member SCO accounts for nearly half the global population, and over 20 percent of global gross domestic product (GDP), according to official statistics. These numbers provide a glimpse of the SCO members' immense demand and potential for development cooperation.

In previous gatherings, leaders of the SCO members expressed their support for the BRI and pledged to dock their respective development strategies with it. Some SCO members like Russia and Pakistan have become key partners with China along the Belt and Road, and their BRI-related cooperation has made notable strides.

Take Russia for example. With a boost from the growing synergy between the BRI and the Eurasian Economic Union, two-way trade between China and Russia hit a record high of over US$100 billion last year.

The two sides have also worked closely on major inter-connectivity cooperation projects, such as the construction of gas pipelines and cross-border roads and bridges.

At the Qingdao summit last year, all eight member states made "building a community with a shared future for humanity" a shared notion in the Qingdao Declaration for the SCO community.

The BRI, with an aim to promote common development in Asia, Europe, Africa and beyond, can offer new opportunities for SCO members and, ultimately, build that shared community.

READ MORE: Belt and Road Initiative is boost for SCO

Addressing the plenary session of the just-concluded 23rd St. Petersburg International Economic Forum last week, Xi said that as the world is standing at a crossroads of history again, pooling wisdom and efforts to expand cooperation and achieve win-win outcomes is the way forward. He called sustainable development the "golden key" to solving global problems.

All SCO members can find this "golden key" along the Belt and Road and work together to build a more peaceful and prosperous world.