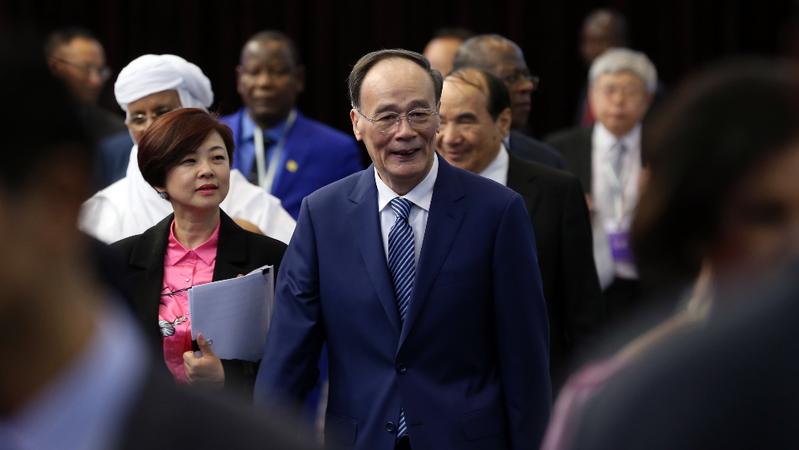 Vice-President Wang Qishan (center) attends the Third Forum on China-Africa Local Government Cooperation in Beijing on May 8, 2018. Wang on May 15, 2018 said that sound China-US economic and trade ties conformed to the fundamental interests of people. (WANG ZHUANGFEI / CHINA DAILY)

Vice-President Wang Qishan called on both sides to deepen their understanding, enhance trust, and settle differences through dialogue and negotiation

Wang made the remarks in Beijing during a meeting with a group of US representatives who attended the 10th round of dialogue between Chinese and US business leaders and former officials.

Wang noted the importance of relations, saying the economic and trade relations featuring equality and mutual benefits were the ballast stone of China-US ties.

He called on both sides to deepen their understanding, enhance trust, and settle differences through dialogue and negotiation.

China would further deepen reform, open wider, improve its trade and investment environment, and release its market charm, he said, calling on business leaders and experts from the two countries to build consensus and promote the stable and healthy development of China-US economic and trade relations.

The US representatives said good US-China ties would promote the economic development of both countries and the world.

They also said the US business community would continue to promote communication and exchanges at all levels and seek solutions for win-win results through consultations.

READ MORE: Are we heading for US-China trade war?