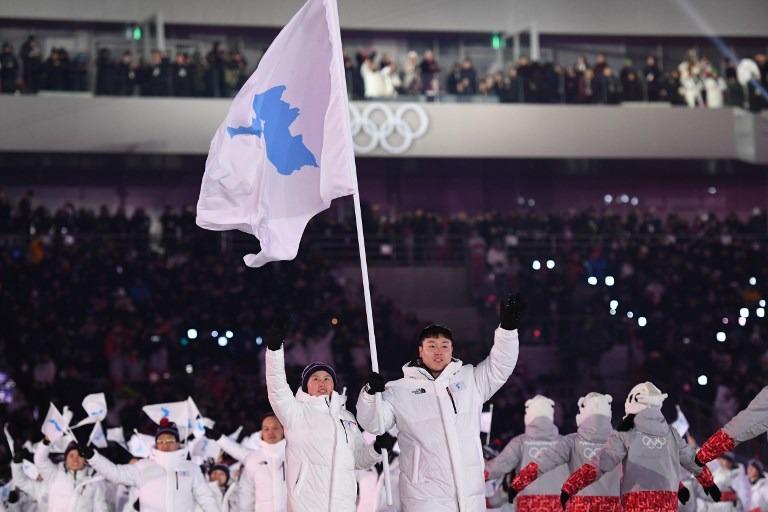 The DPRK's ice hockey player Hwang Chung-gum (center left) and the ROK's bobsledder Won Yun-jong (center right) lead the unified delegation as they parade during the opening ceremony of the Pyeongchang 2018 Winter Olympic Games at the Pyeongchang Stadium, the Republic of Korea on Feb 9, 2018. (KIRILL KUDRYAVTSEV / AFP)

SEOUL - The Republic of Korea (ROK) and the Democratic People's Republic of Korea (DPRK) will not march together at the opening ceremony of the Winter Paralympics, as they did at the Olympics last month, because they cannot agree on a united flag that erases islands disputed with Japan, officials said.

Japan complained to the ROK about fans waving the Korean Peninsula flag at a friendly women's ice hockey match in the Olympics between the combined DPRK and ROK team and Sweden.

The flag depicts a map of the Korean Peninsula, including the disputed islands - known as Dokdo in Korean and Takeshima in Japanese.

The DPRK's delegation to the Paralympics said on Thursday it "does not accept the fact that Dokdo cannot be marked due to political issues held in Korea", according to the statement from the Korea Paralympic Committee.

In response to the North's claim, the International Paralympics Committee said the two Koreas will march individually as the flag cannot be changed.

The athletes from the two countries entered together at the opening of the Pyeongchang Olympics on Feb 9 under the united flag.

The Pyeongchang Paralympics start on Friday and will run until March 18.

The DPRK's participation in the Olympics helped ease tensions between the DPRK and the United States, and Japan, over its nuclear and missiles programs which it conducts in defiance of UN Security Council resolutions and sanctions.