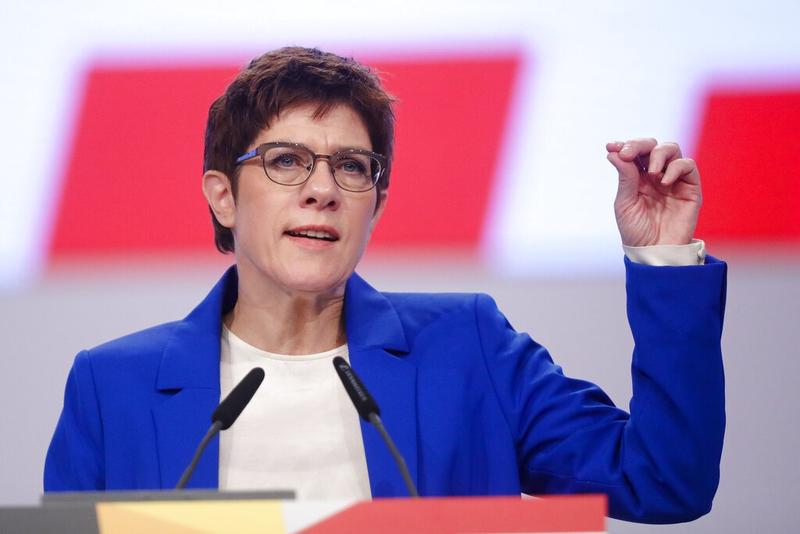 BERLIN — Chancellor Angela Merkel’s party told the new leadership of the Social Democrats that there will be no renegotiation of the terms of their alliance and they can quit the governing coalition if they can’t accept that.

The SPD on Saturday picked government critics Norbert Walter-Borjans and Saskia Esken to take the party forward over Merkel’s Vice-Chancellor Olaf Scholz. The new leaders said they will demand policy changes if they are to maintain their support, and their terms will be set out at a three-day SPD conference starting Friday in Berlin.

This new SPD leadership must decide whether they want to stay in this coalition or not. We made a pledge to the voters. We want to govern on the basis of what was agreed. We are focusing on that and not on the mental state of any coalition partner.

Annegret Kramp-Karrenbauer, head of Merkel’s CDU party, said that there’s no way they will open up a debate on the coalition deal signed in March last year. “We’re not a therapy service for the parties in government,” she said in an interview Monday with ZDF television.

“This new SPD leadership must decide whether they want to stay in this coalition or not,” Kramp-Karrenbauer added. “We made a pledge to the voters. We want to govern on the basis of what was agreed. We are focusing on that and not on the mental state of any coalition partner.”

The rebellion against the SPD establishment pushes Merkel a step closer to the exit after 14 years in power. It also throws up a potential conflict between the chancellor -- keen to see out her final term -- and Kramp-Karrenbauer, who is trying to exert her authority as party leader and may be less willing to compromise as she positions herself to succeed Merkel.

While not all of these would be acceptable to the CDU, and its Bavarian sister-party the CSU, he still expects the coalition to hold until the scheduled end of the legislature in September 2021. “If snap elections do take place, some market volatility may materialize,” Garcia wrote in a note.

The Social Democrat leadership crisis was triggered in June when chairwoman Andrea Nahles resigned after the party was crushed in elections for the European Parliament. The succession contest reopened a party split between establishment figures and the left, which hoped to rebuild the SPD’s credentials with its working-class base. 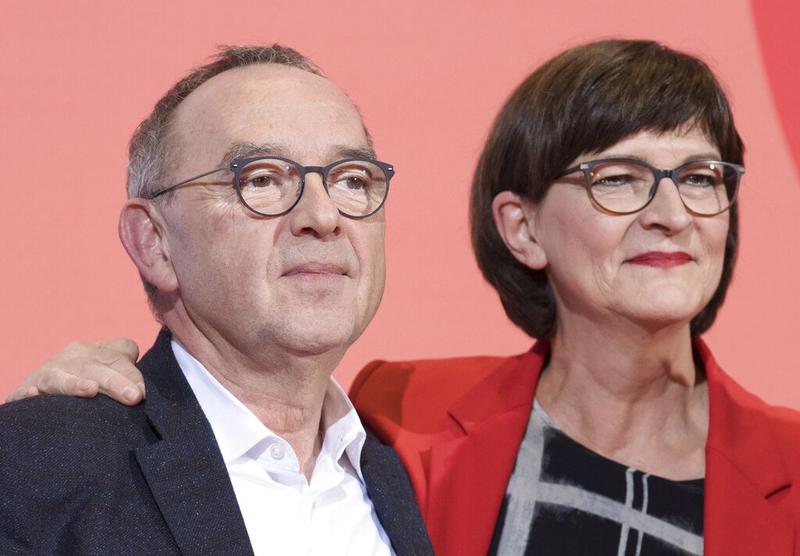 Norbert Walter-Borjans, left, and Saskia Esken stand on the podium after winning the member voting of the Social Democratic Party, SPD, chairmanship at the party's headquarters in Berlin, Germany, Nov 30, 2019. (JOERG CARSTENSEN / DPA VIA AP)

In comments after their victory on Saturday, Walter-Borjans said the party has no intention of abruptly leaving the coalition. The SPD is more likely to put forward a set of demands, such as abandoning Merkel’s balanced-budget stance and raising Germany’s minimum wage. He also indicated that Scholz will stay on as finance minister.

Johannes Kahrs, the SPD’s parliamentary caucus budget spokesman and a party moderate, said Monday he does not expect the government to collapse. If a general election is triggered, the party is at risk of finishing in fourth place behind the Greens and the far-right AfD.

“Both sides in the coalition know that we have to find some sensible results for this country,” Kahrs said in an interview with DLF radio.

“The voters have the right to expect that this nation is ruled sensibly until September 2021,” he added. “That there is some disagreement over content is completely acceptable.”

Any breakup would likely be a drawn out process. In addition to a straight vote on leaving the coalition, there will be proposals at the SPD convention setting out conditions for staying, potentially paving the way for prolonged negotiations with the CDU.

Malu Dreyer, who served as an interim SPD leader following the resignation of Nahles, told ZDF Monday that the coalition agreement contains ample wiggle room to adapt to “changing circumstances” if necessary.

“We can’t behave as if chaos is breaking out here,” Dreyer said. “It’s actually not.”

Chancellor Angela Merkel’s party is rejecting a root-and-branch renegotiation of the agreement underpinning Germany’s government after the junior coalition partner elected leaders who want new concessions, but it was unclear Monday how acute the risk is of the coalition falling apart.

The coalition agreement “is the basis on which we are working, and it is valid for the whole parliamentary term,” said Annegret Kramp-Karrenbauer, leader of Merkel’s center-right Christian Democratic Union

Walter-Borjans and Esken are more skeptical, though they haven’t advocated a quick exit. They have advocated renegotiating issues such as the level of the minimum wage, climate protection and investment, though it’s unclear how far their demands will go.

A party congress starting Friday is likely to show what the Social Democrats want to achieve to stay in the coalition, nearly two years before the next election is due. The party is mired in a long-term poll slump, which some blame on its status as Merkel’s junior partner for 10 of the past 14 years.

Merkel’s Union bloc has made clear that it sees no need for a significant overhaul. The coalition deal thrashed out last year features a provision for a midterm review including consideration of whether “new plans must be agreed in light of current developments.”

The leader of Merkel’s center-right Christian Democratic Union, Annegret Kramp-Karrenbauer, told ZDF television Monday the new leadership doesn’t amount to a major change “as a result of which we have to completely renegotiate a coalition.”

The coalition agreement “is the basis on which we are working, and it is valid for the whole parliamentary term,” she said. “We are concentrating on dedicating ourselves to work of substance — we are not a therapy facility for the coalition parties.”

She noted that both the other parties in the coalition have changed their leaders since the government took office without demanding a renegotiation.

While she and other conservatives are firmly ruling out a radical renegotiation, it’s possible that there may be some room for talks that fall short of that — and unlikely that the Union will want to be seen as responsible for the coalition collapsing.

If the Social Democrats did decide to walk out, it’s unclear what would happen. Merkel’s bloc could seek to carry on in a minority government, or the result could eventually be an early election.

Merkel has said that this is her last term and she won’t run in the next election, currently due in the fall of 2021.