China, Canada to press ahead with FTA negotiations 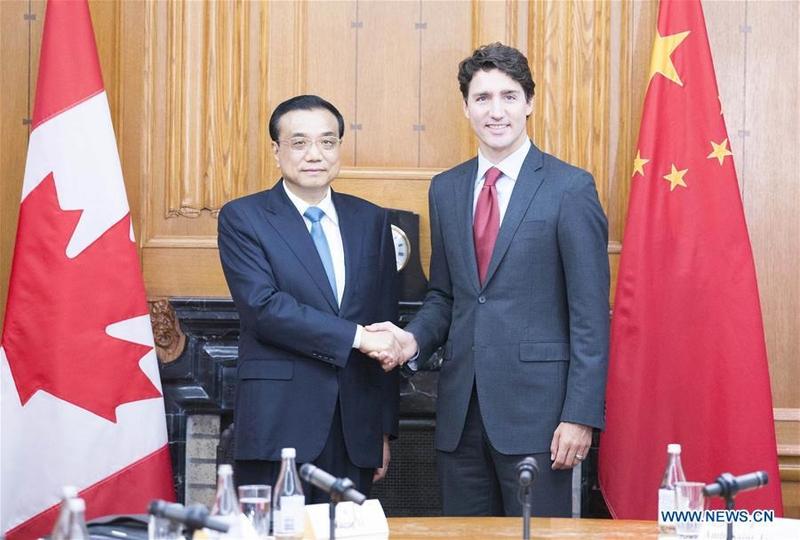 SINGAPORE – China and Canada Wednesday pledged to press ahead with negotiations on free trade agreement (FTA).

The pledge came as Chinese Premier Li Keqiang held the third annual dialogue with his Canadian counterpart Justin Trudeau on the sidelines of a series of leaders' meetings on East Asian cooperation here in Singapore this week.

China stands ready to continue to promote the FTA negotiations with Canada on the basis of mutual respect and in a flexible and pragmatic way.

"We have noticed that Canada has made clarification on a new trade agreement reached among the United States, Mexico and Canada (USMCA), saying that the agreement will not affect Canada's decision of FTA agreement with other countries," Li told Trudeau.

"China stands ready to continue to promote the FTA negotiations with Canada on the basis of mutual respect and in a flexible and pragmatic way," Li said.

Li was referring to a provision in the USMCA reached recently stipulating that if a member country wants to enter a free trade deal with a "non-market" economy, it must notify the others three months before starting negotiations, while the others can quit within six months to form their own bilateral trade pact.

Trudeau later made it clear at the Fortune Global Forum 2018 in Toronto on Oct 15 that his country will continue to take various measures to strengthen trade relations with China.

During the annual dialogue, Trudeau told Li Canada is willing to work with China to push forward FTA talks, adding that his country will not be influenced by other countries' position.

He said the two nations will send a positive message to the world that they will further enhance economic and trade relations and advocate free trade.

Canada is ready to intensify cooperation with China in different areas so as to bring more benefits to the people of both nations, he said.

Calling China and Canada important partner of each other, Li said this year has witnessed smooth development of bilateral ties and progresses of cooperation in various areas.

"The regular meeting between the two heads of government shows that China-Canada ties have forged ahead in a steady way," Li said.

China is willing to promote strategic partnership with Canada on the basis of mutual respect and equal treatment, he said.

Hailing that China and Canada are highly complementary in economy, Li said the two nations enjoy broad prospects of cooperation.

China would like to further expand the scale and lift the level of trade and investment with Canada, and strengthen cooperation in areas including aviation, climate change, environment, agriculture and finance, Li said.

Under the current situation that multilateralism and free trade are under threat, China stands ready to work with Canada to safeguard the rules-based international order and free trade system and promote liberalization and facilitation of trade and investment, the premier said.

Stressing that China is open to the reform of the World Trade Organization (WTO), Li said the reform need to make the globalization develop in a healthier way and better safeguard free trade.

Trudeau briefed Li a closed-door meeting participated by trade ministers from 12 countries and the European Union on the WTO reform held in Ottawa on Oct 25, saying that his country is willing to continue communication and coordination with China on the WTO reform.

The two sides issued a joint statement on dealing with ocean trash and plastics.