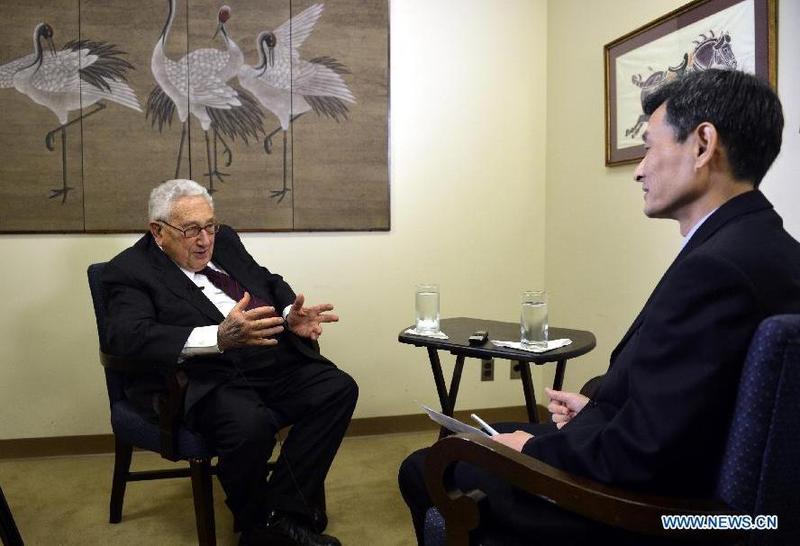 NEW YORK - Former US Secretary of State Henry Kissinger said here Tuesday that the US-China relationship will be the defining relationship for the world of the 21st century, and the two countries should work together to promote peace and human progress.

Addressing the US-China University Presidents and Think Tank Forum held in Columbia University, Kissinger said "it would be imperative that we work together, to live out this relationship from the pragmatic, and from the day-to-day problems to the conceptual, to the creation of a new and competing type of the world order that promotes peace and human progress, as we are now doing on the current issue."

When China and the United States first established its present relationship, the motivation was largely strategic, to conserve securities

Former US Secretary of State

He stressed that conflict between China and the United States would be a disaster by each society and for the world at large. "As I said before, we do not have this choice."

Kissinger said that he has visited China more than 100 times since the first one 46 years ago, learning something on each trip, noting that the culture of China is so manifold that he will never cease learning.

During the years American and Chinese leaders have managed to know each other and understand each other, the people-to-people exchanges between the two countries in the recent past have evolved into an absolute prerequisite for world order, he said.

"When China and the United States first established its present relationship, the motivation was largely strategic, to conserve securities," the veteran diplomat said.

"Today, they might seek a concept not of security, but of co-evolution, in which two big societies can exist side by side, occasionally pursuing different objectives, but merging them in a common perception of the necessities and of opportunities that are the imperative of our age," he added.

China is pursuing the realization of the two centenary goals, he said, adding that all the people who have witnessed China's development in one generation will have no doubt that China will fulfill its dream.

"If somebody have shown me in 1971, when I first visited China, a picture of what Beijing and other cities look like today, I would have considered that a fantasy, so China will reach its dream," he said.

He said that China's Belt and Road Initiative, in seeking to connect China to Central Asia and eventually to Europe, "will have the practical significance of shifting the world center of gravity from the Atlantic to the Pacific."

It "will involve the cultures of Eurasia, each of whom will have to decide what relationship with this region they will seek, and so will the United States," he said.

"This is why many of us urge the United States to join the Asian Infrastructure Investment Bank when it was proposed by China," he said, explaining that in both countries, there exist a variety of opinions about how to reconcile these many realities, and whether these issues have to be resolved by conflicts or by cooperation.