Official: No room for talk about 'HK independence' 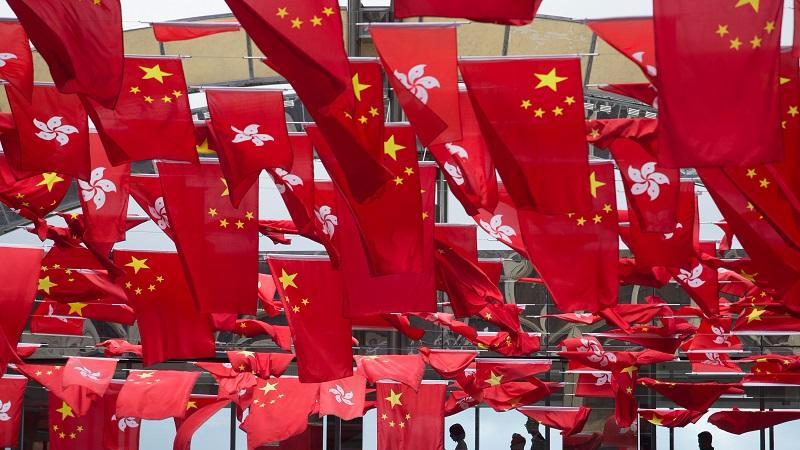 China flags hang outside a business center to celebrate the 20th anniversary of the establishment of the Hong Kong Special Administrative Region in Tsim She Tsui on June 25, 2017. (ROY LIU / CHINA DAILY)

Hong Kong's second-highest-ranking official said on Saturday that there is "no room for discussion" about separatism in the special administrative region.

Chief Secretary for Administration Matthew Cheung Kin-chung made the remark after 10 local university presidents issued a joint statement against recent pro-independence posters on their campuses.

"Advocating the notion challenges the country's bottom line on sovereignty and territorial integrity, which is intolerable," he said, adding that the university heads had delivered a clear message on the independence question, and advised students to focus on other issues rather than continuing any discussion of separatism.

"There is no room for discussion," Cheung said.

Advocating the notion challenges the country's bottom line on sovereignty and territorial integrity, which is intolerable

He added that the people of Hong Kong value freedom of speech, but there are certain boundaries and bottom lines for that freedom. All freedom should be enjoyed within proper limits, Cheung said.

He was joined by Paul Chan Mo-po, financial secretary of the Hong Kong SAR. Chan expressed hope that the people of Hong Kong would stop the wrangling, which he said leads to polarization.

Their calls were echoed by the city's education sector. Ho Hon-kuen, the chairman of a local alliance of education professionals - Education Convergence - said that educational institutions must make it clear to students that the "Hong Kong independence" notion violates the Basic Law.

Another local education professional organization - the Hong Kong Federation of Education Workers, released a joint statement signed by eight local educational groups and 11 individual heavyweights in the sector. They expressed their sadness witnessing the recent strife at the universities and vowed to stand firm on what is right in teaching Hong Kong's next generation.

The hubbub began when posters advocating "Hong Kong independence" appeared on university campuses at the beginning of the new semester. In one of the most widely reported incidents, a confrontation developed between student union members and mainland students at Chinese University of Hong Kong.

The presidents of 10 universities in Hong Kong issued a joint statement on Friday condemning both the notion of independence and the abuse of freedom of expression. They said they do not support "Hong Kong independence" and stressed that it would be a violation of the law.

"We treasure freedom of expression but we condemn its recent abuses. All freedoms come with responsibilities," the brief statement said.

Sung also apologized to those offended by "malicious personal attacks" and "abusive language" from CUHK students.

He stressed that the Basic Law stipulates that Hong Kong is an inseparable part of the People's Republic of China and that CUHK opposes the concept of "Hong Kong independence".