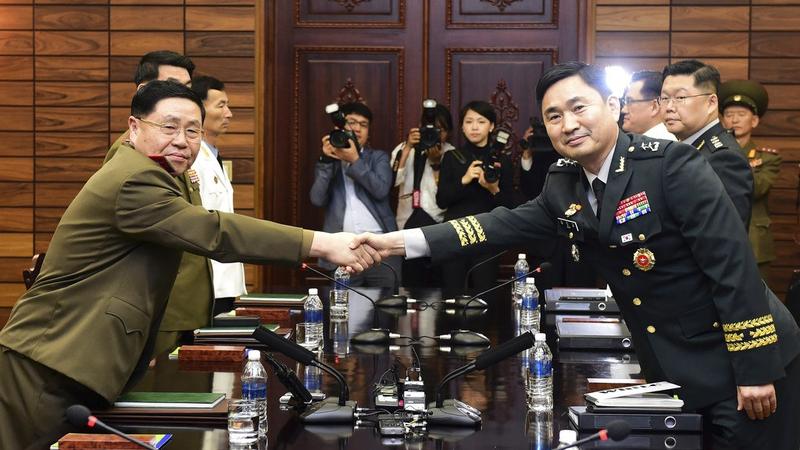 In this photo provided by the Republic of Korea (ROK)'s Defense Ministry, ROK Maj. Gen. Kim Do-gyun (right) shakes hands with the Democratic People's Republic of Korea's Lt. Gen. An Ik-san during a meeting at the northern side of Panmunjom, DPRK, June 14, 2018. (ROK DEFENSE MINISTRY VIA AP)

General-level military officers from the two sides held talks on military affairs, the first of its kind in over 10 years, at Tongilgak, a DPRK building in the truce village of Panmunjom that straddles the divided Koreas. The last general-level military dialogue between Seoul and Pyongyang was held in December 2007.

The two sides agreed to completely restore the eastern and western military communication lines, while thoroughly implementing the agreement reached in June 2004 during the general-grade inter-Korean talks to prevent maritime conflicts in the western waters along the border.

In this photo provided by the Republic of Korea's Defense Ministry, ROK Maj. Gen. Kim Do-gyun (center right) is escorted by an officer from the Democratic People's Republic of Korea (DPRK) after crossing to DPRK for the meeting at the northern side of Panmunjom, DPRK, June 14, 2018. (ROK DEFENSE MINISTRY VIA AP)

The western military communication line was already restored in January as the high-level inter-Korean dialogue was resumed in the month.

The western military channel had been cut since February 2016 when then ROK government closed down the inter-Korean industrial complex in the DPRK's border town of Kaesong over Pyongyang's nuclear test.

The eastern military communication line has been severed until now as it was destroyed by forest fire.

During the talks, the two sides exchanged opinions about a pilot demilitarization of the Joint Security Area (JSA) in Panmunjom to ease military tensions across the heavily armed inter-Korean border.

They also discussed ways to stop all hostile acts, ways to turn the western maritime border into a peace zone, and safety guarantees for inter-Korean exchange, contact and cooperation.

Seoul and Pyongyang agreed to continue talks about those issues raised during the Thursday talks between general-level officers.

The five-member ROK delegation was led by Maj. Gen. Kim Do-gyun, a senior-level official of the defense ministry in charge of inter-Korean military affairs.

The DPRK side, composed of five delegates, was headed by Lt. Gen. An Ik-san.