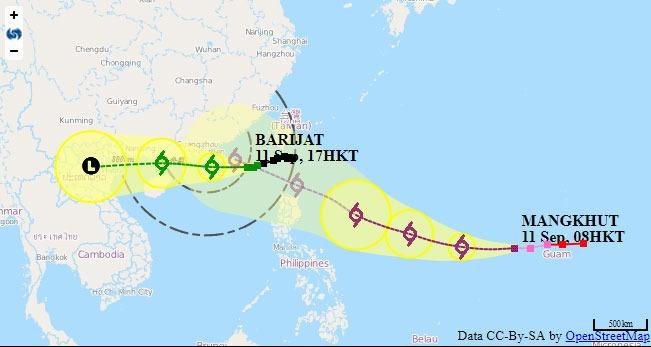 This screenshot taken from the official website of the Hong Kong Observatory shows the forecast track of Mangkhut and Barijat as of 5 pm, Sept 11, 2018 (HKT).

A super typhoon is intensifying in the Pacific and is forecast to barrel through the Philippines and Taiwan this week before heading to the Hong Kong Special Administrative Region and south China.

Mangkhut, classified by the Hong Kong Observatory as a super typhoon, is forecast to pack maximum winds of 230 kilometers per hour by Friday before gradually weakening. The typhoon, expected to be closer to south China by the weekend, will bring heavy rains and storm surges on its trail.

The typhoon, expected to be closer to south China by the weekend, will bring heavy rains and storm surges on its trail

The circulation of Barijat, classified only as tropical storm, is relatively small and is expected to maintain some distance from Hong Kong Tuesday night, the forecaster said.

In disaster-prone Philippines where about 20 cyclones pass each year, Mangkhut, which is named after a fruit in Thailand, is forecast to enter on Wednesday just as another storm left. Super Typhoon Haiyan killed more than 6,300 people in the Southeast Asian country in 2013.

The strongest typhoon to hit the Philippines this year is threatening the farmlands in Northern Luzon just before the rice and corn harvest. The staple grain is the second-biggest item in the Philippine consumer basket, and record prices boosted inflation to 6.4 percent in August, the fastest pace since 2009.

The storm may damage as many as 156,793 metric tons of rough rice and 257,100 metric tons of corn in the Philippines worth as much as 13.5 billion pesos (US$250 million), Agriculture Secretary Emmanuel Pinol wrote on his Facebook account Tuesday.

Surging prices are adding to risks to the Philippine economy and the central bank has pledged strong action to restrain inflation. President Rodrigo Duterte ordered more rice imports as prices climbed to a record, vowing to use the military and police to raid warehouses if there’s a scheme to artificially prop up prices.

Mangkhut, to be named Ompong once it enters the Philippines, has intensified, according to the local weather bureau. The US military’s Joint Typhoon Warning Center forecasts top winds of 135 with maximum gusts of 165 knots in the next three days.

It’s expected to be 250 kilometers off Kaohsiung in southern Taiwan on Sept 15 before heading to Hong Kong, according to the US agency.