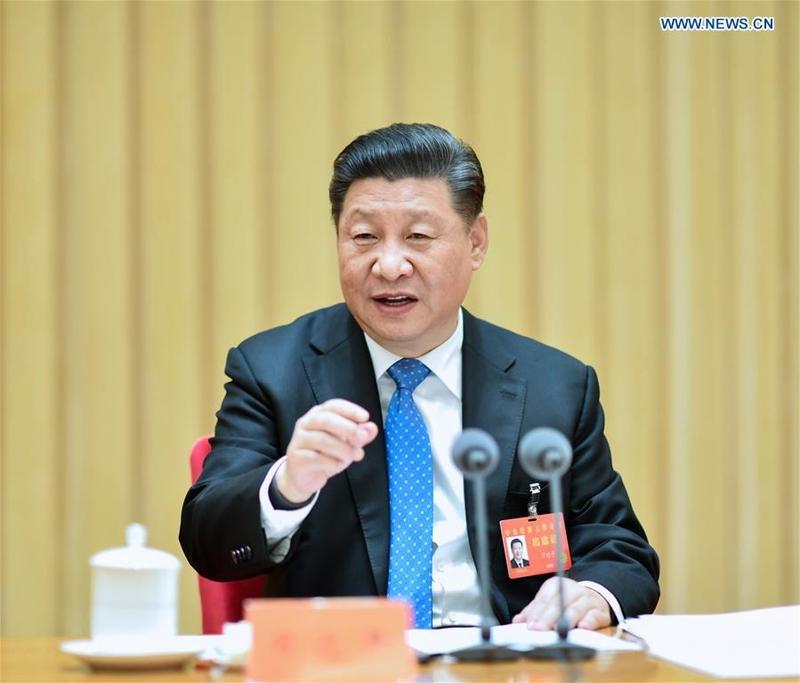 Chinese President Xi Jinping speaks during the annual Central Economic Work Conference in Beijing, capital of China. The conference was held in Beijing from Dec.19 to 21, 2018. (LI XUEREN / XINHUA)

BEIJING - The annual Central Economic Work Conference was held in Beijing from Wednesday to Friday, as Chinese leaders charted course for the economy in 2019, a key year for the country to achieve its goal of building a moderately prosperous society in all respects by 2020.

In a speech at the conference, Xi Jinping, general secretary of the Communist Party of China (CPC) Central Committee, Chinese president, and chairman of the Central Military Commission, reviewed the country's economic work in 2018, analyzed the current economic situation and arranged the economic work in 2019.

The country has "made new steps towards finishing the building of a moderately prosperous society in all respects," the statement said

China has effectively coped with profound changes in the external environment this year, risen to challenges with solid work, accomplished the goals of macro-regulation relatively well and delivered a good start in the three tough battles against major risks, poverty and pollution, according to a statement issued after the meeting.

The country has "made new steps towards finishing the building of a moderately prosperous society in all respects," the statement said.

"The achievements we've made have not come easily," it said.

Over the past year, the leadership has gained a deeper understanding about economic work under new circumstances, according to the statement.

It said the country must uphold the centralized and unified leadership of the CPC Central Committee; assess current circumstances from a long-term perspective and have a clear vision about the country's long-term promising development prospects; make macro-regulation precisely, actively fine-tune policies and enhance policy coordination; timely respond to concerns of the society and guide market expectations in a targeted manner; give full play to the initiative of all parties to form synergy.

"While fully acknowledging the achievements, we must see that there are new and worrisome developments amid generally steady economic operation, the external environment is complicated and severe, and the economy faces downward pressure," the statement said.

However, it described the problems as part of development, noting that China is still and will be in an important period of strategic opportunity for development for a long time to come.

The world is facing unprecedented changes in a century, bringing both challenges and opportunities, the statement said.

To turn pressure into impetus for high-quality development, China should speed up the optimization and upgrading of its economic structure, enhance the capability of technological innovation, deepen reform and opening-up, accelerate green development, and participate in the reform of the global economic governance system.

Ensuring sound economic work is especially important for 2019, which marks the 70th anniversary of the founding of the People's Republic of China and is key for building a moderately prosperous society in all respects, the statement said.

Reforms in various fields including state-owned enterprises, taxation and financing, land, market access as well as social management will be pushed forward

China will strengthen counter-cyclical adjustments in its macro policy, continue to implement the proactive fiscal policy and the prudent monetary policy, make pre-emptive adjustments and fine-tune policies at the proper times, and ensure stable aggregate demand, according to the statement.

Bolder and more effective measures must be taken to implement the proactive fiscal policy, with a larger scale of tax and fee cuts and a relatively substantial increase in the issuance of special-purpose local government bonds, the statement said.

China will keep the prudent monetary policy "neither too tight nor too loose" while maintaining market liquidity at a reasonably ample level, according to the statement.

The monetary policy transmission mechanisms will be further smoothed out while the proportion of direct financing will be increased to make financing more accessible and affordable for the private sector and small businesses.

Reforms in various fields including state-owned enterprises, taxation and financing, land, market access as well as social management will be pushed forward, while the institutional environment will be improved to encourage fair competition and facilitate the accelerated development of small and medium enterprises.

Social policies should be made to help those most in need, while high priority will be given to employment, the statement said.

The meeting said the country has won "the initial victory in its three tough battles" against risk, poverty and pollution this year, and targeted efforts will be taken in 2019

China must stick with the supply-side structural reform to tackle major economic problems and more frequently resort to market-oriented and law-based means, the statement said.

Previous structural adjustments should be reinforced, with continued efforts to downsize glutted industries, reduce all types of business burdens and channel more energy into weak areas including infrastructure.

Micro market entities will be further motivated and energized, with the establishment of fair, open and transparent market rules and a law-based business environment.

China will work to promote technological innovation and foster new industrial clusters, build a unified and open market system with orderly competition, and prompt the financial sector to better serve the real economy.

The meeting said the country has won "the initial victory in its three tough battles" against risk, poverty and pollution this year, and targeted efforts will be taken in 2019.

While greater efforts and input shall be made in pollution control, government departments must take into consideration all factors and help businesses find solutions.