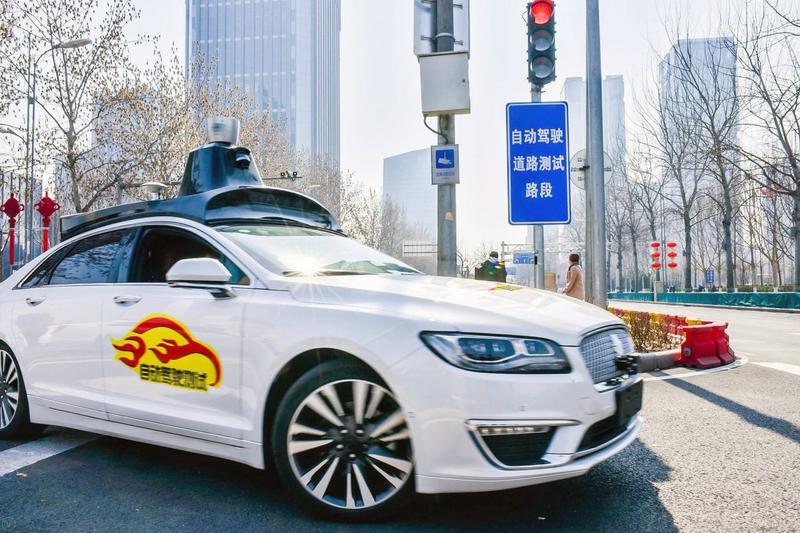 Beijing has earmarked 33 road sections with a total length of 105 kilometers for testing autonomous cars－the longest among all Chinese cities, as companies are competing to mass produce the technology.

According to Beijing Innovation Center for Mobility Intelligent, a service provider of road tests for autonomous vehicles, self-driving vehicles have traveled safely for 26,000 kilometers in test areas in the capital city.

"It will give companies betting on autonomous technologies wider access to a vast amount of high-quality data," Zheng said. "That is at the core of self-driving vehicles' capability to make control decisions."

To ensure the rapid development of autonomous vehicles, the Chinese authorities have been expediting relevant guidelines and regulations

Five companies had received licenses to road test their vehicles in the capital as of June 28, according to Beijing Innovation Center for Mobility Intelligence.

License plates used in the autonomous driving road tests of Beijing have five levels, from T1 to T5. The highest level that has been issued so far in China is T3, which shows that the vehicles possess capabilities such as road condition recognition, vehicular traffic laws compliance and emergency disposal. Baidu obtained T3 plates in March.

Earlier this week, Pony.ai, a self-driving startup, became the second company to be granted a T3 license plate.

Peng Jun, CEO of Pony.ai, said obtaining this type of license plate shows that the company gained greater technical recognition, and the next challenge is small-scale mass production, which requires the stability and reliability of the system.

To ensure the rapid development of autonomous vehicles, the Chinese authorities have been expediting relevant guidelines and regulations. In December, local authorities in Beijing released the nation's first guideline on road tests for autonomous motor vehicles.

The guideline makes it clear that independent entities registered in China can apply to test at most five vehicles at a time, and they must first complete tests in designated closed zones before conducting road tests.

Zhao Xiang, an analyst with the internet consultancy Analysys, said self-driving technology is maturing but still facing obstacles for commercial use. Technological hurdles may include the accuracy of digital maps and the high cost of laser sensors used in self-driving car systems, she said.

In Beijing, test areas for self-driving vehicles are mainly located in the suburbs, such as the economic development zone in Yizhuang, Shunyi district and Haidian district. Other cities such as Shanghai and Chongqing have also licensed driverless vehicles.