By Prime Sarmiento in Manila 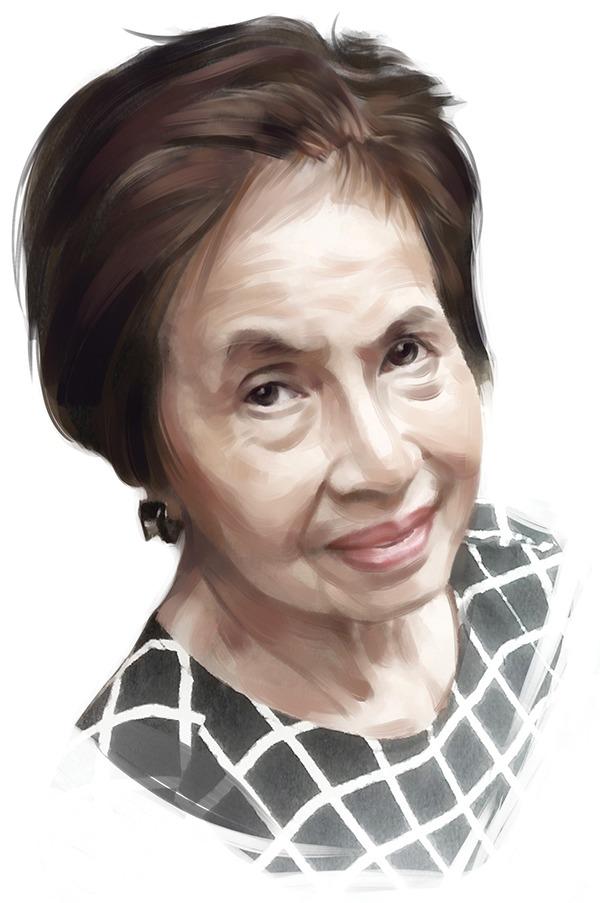 Her father, the late industrialist Ching Ban Lee (Zhuang Wanli), traveled to the United States, China, Europe and Russia to collect the best of Chinese art and antiques. Tan and her brother Alfred will later donate Ching’s collection of Chinese paintings and calligraphy to the Shanghai Museum, and rare editions of Chinese classics to the National Library of China in Beijing, to fulfill their father’s dream of returning these artworks to China.

Such early exposure to some of China’s best artworks nurtured Tan’s interest in her Chinese heritage and ultimately steered her toward a fulfilling career as a scholar.

“My father was a serious collector of (Chinese) paintings. (Because of) my early exposure, I feel more comfortable with Chinese art,” Tan told China Daily Asia Weekly.

Tan is the Philippines’ foremost expert on Chinese porcelain — specifically pieces traded from the 10th to 17th centuries. Despite the fact that she is nearly 80 years old, Tan remains tireless as an oriental ceramics scholar. She has no plans to retire from her chosen profession, stressing the importance of these artifacts in both Philippine and Chinese histories.

“They (ceramics) are the most telling witnesses of our (centuries-old) trade with China,” she said.

Tan is alluding to the ancient maritime silk trade, which saw Chinese merchants sailing the South China Sea to barter ceramics, tea and silk with Philippine pearls, tortoise shells and fabrics as early as the 10th century, during the Song Dynasty (960-1279). Such artifacts have become more significant since Chinese President Xi Jinping’s decision to launch the 21st Century Maritime Silk Road — which together with the Silk Road Economic Belt forms the Belt and Road Initiative, to boost connectivity between Asia, Europe and Africa.

Tan said most of these high-fire China porcelain items were considered luxury ware, which is why most pre-colonial grave sites in the Philippines have oriental ceramics, as it was a common practice then to bury the dead with their valuables. And because the production periods of ancient Chinese ceramics are so well defined, archaeologists are able to use such items found at Philippine archaeological sites to date Philippine artifacts.

While arts and culture have always been Tan’s interests — she was an essayist whose works have been published in the literary section of Chinese-language newspapers in the Philippines — her interest in Chinese ceramics research only started after she volunteered to house the books of the Oriental Ceramic Society of the Philippines (OCSP). That was around 1981, and Tan joined the group out of curiosity for anything related with Chinese arts and culture.

She then read the books that the OCSP entrusted to her, joined the society’s meetings, and viewed the personal collections of some of its members.

Although Tan did not develop into a collector like her father, being a connoisseur is in her veins, hence her interest in art research.

Tan noticed that despite the abundance of Chinese artifacts in the Philippines, limited research had been done on the subject. There were only a handful of serious collectors who actually knew and appreciated what they were buying. Others were either being fleeced by unscrupulous sellers or they treated ceramics as just another pricey antique item for display in their living rooms.

To be the scholar that she envisioned, Tan knew she had to undertake a more rigorous, disciplined learning process. So in the late 1980s, with both of her daughters grown up, Tan left Manila for London to enroll at the School of Oriental and African Studies, University of London. She chose to go to the United Kingdom because so many British scholars were interested in the study of oriental ceramics.

Learning about ceramics “is so much work. It was profound. I wanted to learn in a more systematic way,” she said.

Tan pursued a master’s degree in art and archaeology, with her thesis focusing on the 16th century blue and white ware produced during the Ming Dynasty (1368-1644). Soon after, Tan returned to the Philippines and immediately shared the knowledge she had gained from her two years in London.

Over the next 20 years, Tan worked with OCSP to publish several books, organize exhibits and give lectures on Chinese and Southeast Asian ceramics. She also presented papers on Chinese ceramics at international symposiums in Singapore, Hong Kong, Shanghai and Taipei.

Tan is known for having curated permanent exhibits such as the Roberto T Villanueva collection of Chinese and Southeast Asian trade wares in the Ayala Museum and the Ching Ban Lee Ceramics Gallery in the Kaisa Heritage Center, both in Manila. She wrote a short guide on the Roberto T Villanueva collection — considered one of the country’s most comprehensive displays of Chinese and Southeast Asian ceramics.

One of her first projects on returning from the UK was to help OCSP and the National Museum of the Philippines to exhibit, in October 1988, ceramics from South China’s Guangdong province found in the southern Philippine city of Butuan.

In 1993, Tan revisited her master’s thesis, collaborating with fellow ceramics scholar Allison Diem and renowned blue and white ware collector Larry Gotuaco to organize an exhibition and publish the definitive book on Chinese and Vietnamese blue and white wares traded to the Philippines during the 14th-16th century period.

Four years after its conception, the exhibition and book launch was held in March 1997, with OCSP inviting Tan Ba Hoanh, then director of the Hai Hung Provincial Museum, to contribute a paper on Vietnamese kiln sites — the main source of this centuries-old Southeast Asian pottery.

Tan’s most recent project was a month-long exhibition on Fujian ware, from East China’s Fujian province. Held in September at the Ayala Museum, it showcased more than 100 pieces — including jars, pots and plates — produced by Fujian’s kilns during the Song Dynasty and Yuan Dynasty (1271-1368).

Tan also conducts museum tours from time to time. In February 2008 at the Yuchengco Museum in Manila, at the exhibition entitled Zhangzhou Ware Found in the Philippines: ‘Swatow’ Export Ceramics from Fujian 16th-17th Century, Tan not only gave a talk on the ceramics from the Zhangzhou area of Fujian province but also a special guided tour, in which she discussed the techniques, subjects and motifs seen in Zhangzhou ware.

Tan can discuss each item included in any of her books, exhibitions or lectures, stressing that she knows each artifact by heart. Her deep knowledge and passion for the ancient wares has made her a sought-after speaker. In turn, she has welcomed the growing fascination with oriental ceramics, noting the big turnout at her lectures.

“I’m impressed with the interest (in oriental ceramics). Ceramics is not a popular subject. It’s high-brow. I didn’t expect many people to show up (for my lectures),” she said, adding that her audiences come from all walks of life and are “really culture-oriented. I like that kind of audience.”

For Tan, it is important to hold these exhibitions and lectures to generate public awareness and appreciation of antique Chinese ceramics. This is because, apart from the permanent exhibits housed at the Ayala Museum, the National Museum of the Philippines and the Kaisa-Angelo King Heritage Center, most of the Philippines’ Chinese trade wares are with private collectors.

“A lot of people are interested in ceramics, they just don’t know where to learn about them,” she said.

MA, art and archaeology, School of Oriental and African Studies, University of London

What is your advice to new collectors of oriental ceramics?

Study first. Know the ceramics before you buy. Many (first-time collectors) end up buying fakes because they don’t know enough. It is also more exciting to know what you are buying — so try to know the ware first.

What are your favorite museums?

I go to museums to see things I understand, because otherwise I don’t remember much of what I see. (My research interest is) highly specialized, so wherever I go, I only go to museums with a good collection of Chinese ceramics. The British Museum, I studied there and I love it. The Victoria and Albert Museum in London has a good (Chinese ceramics) collection. In Paris, I go to Musee Guimet.

What do you do to relax?

I watch newscasts on TV. I love the opera. I also like classical ballet.