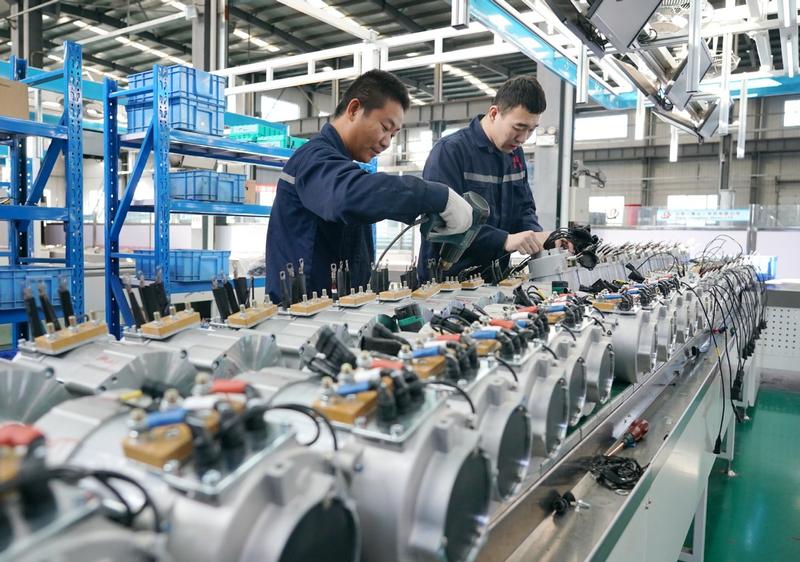 The rebound of China's manufacturing activity in November indicated improved external and domestic demand in light of effective government measures to shore up growth and the recent de-escalation of the trade tension between Beijing and Washington, according to a survey of private and smaller firms on Monday, reinforcing the optimistic official data released over the weekend.

The Caixin China General Manufacturing Purchasing Managers' Index rose for the fifth straight month to 51.8 in November from 51.7 in the previous month, indicating the fastest expansion since 2017, according to a survey jointly released by media group Caixin and information provider IHS Markit.

The manufacturing growth led to recovery of the labor market in November as the employment index of the Caixin survey returned to expansion for the first time in eight months, meaning that companies hired more workers that month.

"The Chinese economy continues to recover in November as domestic and external demand of the manufacturing sector maintained relatively fast growth," said Zhong Zhengsheng, director of macroeconomic analysis at CEBM Group, a subsidiary of Caixin.

De-escalation of China-US trade tension and increasing overseas orders during the Christmas season have led to improved external demand while domestic countercyclical policy adjustments have been effective in spurring demand and resulted in a pickup in infrastructure activities. The Singles Day shopping spree on Nov 11 also helped drive up domestic consumption, Zhong said.

The Caixin index was based on a survey of private, smaller and export-oriented firms in China, while the official PMI released by the National Bureau of Statistics focuses more on large enterprises.

Ren Zeping, chief economist at Evergrande Research Institute, said companies' profit margins, especially those of smaller firms, are still under pressure, and many of them continue to experience cash strains, which means there is still room for more monetary easing.

Some analysts expect China to continue with targeted monetary easing to keep liquidity reasonably ample in the market.

Yi Gang, governor of the People's Bank of China, the central bank, said in an article published on Sunday that China will not resort to quantitative easing or zero-interest rate policies to stimulate growth. He said China will maintain a "normal" monetary policy as long as possible since economic growth is still within a reasonable range and inflation is mild overall.

Michele Barlow, head of investment strategy and research for the Asia-Pacific at State Street Global Advisors, expected the Chinese government to continue use of measured policies to maintain liquidity in the banking system and to support infrastructure.

But the government will be careful and cautious about policy easing as it intends to avoid pushing the country's debt level to a riskier area and substantially driving up property prices, she said.