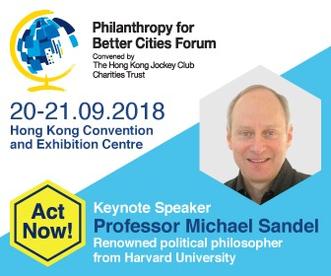 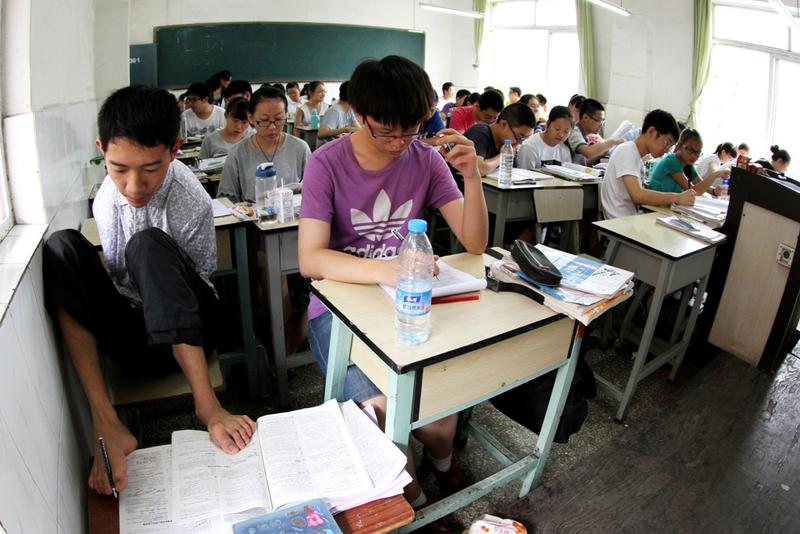 Peng Chao, a disabled student from Sichuan province, uses his feet to write notes as he prepares to take the gaokao. (WANG CHUANYUAN AND XU QING / FOR CHINA DAILY)

This week, millions of hopefuls will take the grueling college entry exam, but for one group, it presents an even greater challenge, as Zou Shuo reports.

The gaokao, China's national college entrance exam, takes place this week. It is a make-or-break experience for millions of prospective students, who undertake as many as three days of intensive tests that, in many cases, will determine their future.

While every student is daunted by the grueling exam, it is often an even bigger challenge for those with physical or mental disabilities.

In recent years China has been providing greater assistance for students with disabilities, especially by ensuring that they are given convenient and equal access to the gaokao

To address the situation, in recent years the country has been providing greater assistance for students with disabilities, especially by ensuring that they are given convenient and equal access to the gaokao.

In 2014, the Ministry of Education published a notice stipulating that examining bodies should provide the necessary assistance and equipment to enable blind and visually impaired students to take the exam.

The following year, the ministry and the China Disabled Persons' Federation issued a guideline that required examining bodies nationwide to offer "reasonable" assistance to students with disabilities taking the test, according to their needs.

For example, blind and visually impaired students should be provided with exam papers in Braille or bearing large-print characters, while those with hearing disabilities are allowed to use hearing aids and can be exempted from the aural section of English exams providing they obtain permission.

Those with physical disabilities can use wheelchairs and crutches, and the duration of the tests, which usually last two or two and a half hours, can be extended if students have difficulty writing.

According to the federation, 5,626 students applied for assistance of some sort during last year's gaokao.

Experts have welcomed the rulings, saying they will better serve the needs of students with disabilities, but they also called for more assistance tailored to meet students' varied and specific needs.

Han Ying, a 23-year-old from Guangzhou, Guangdong province, was born with cerebral palsy and is also visually impaired. In 2015, she spent the night before the gaokao practicing filling in the small boxes on multiple choice papers.

"The tiny boxes on the answer sheet looked like ants to me, so in addition to making sure I learned all the academic points, the other thing I did frequently was to fill in as many answer sheets as possible, so I would have enough time during the exam," she said. 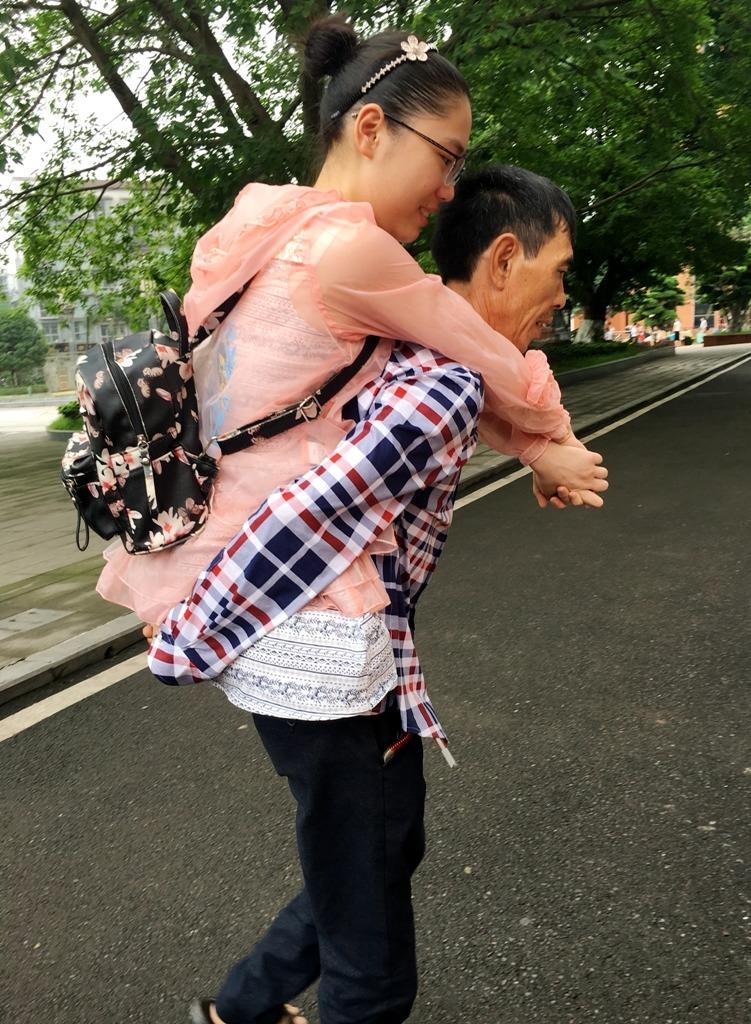 Huang Huan, a double amputee from Sichuan, is carried from the exam room by her father. (WANG CHUANYUAN AND XU QING / FOR CHINA DAILY)

Having submitted several applications to the local examining authority, Han was also allowed to take each test in a separate room, away from the other students. Moreover, as she entered the room Han was informed that the time allotted for the tests would be extended by 30 percent.

"The extra time was a great help to me because I write very slowly," she said.

While welcome, the added duration also had a downside. During the final 30 minutes of the Chinese language exam, Han began to tremble uncontrollably as a result of writing for 145 minutes without a break, which posed a huge physical challenge.

"I did not tell the teacher about the trembling because I was busy filling in the answer sheet. I knew the answers to the questions, and I was not going to let my physical condition hold me back," she said.

"I'm glad I took the exam because it gave me the opportunity to compete with the other students."

The gaokao is a pivotal moment for high school students because their scores will largely determine their future - whether they can attend university, which institutions will accept them and consequently what careers await them.

The assistance Han received meant she did well enough to be admitted to a vocational college in Guangdong, majoring in community management and service.

However, not every student is as fortunate, and some have even been denied assistance. 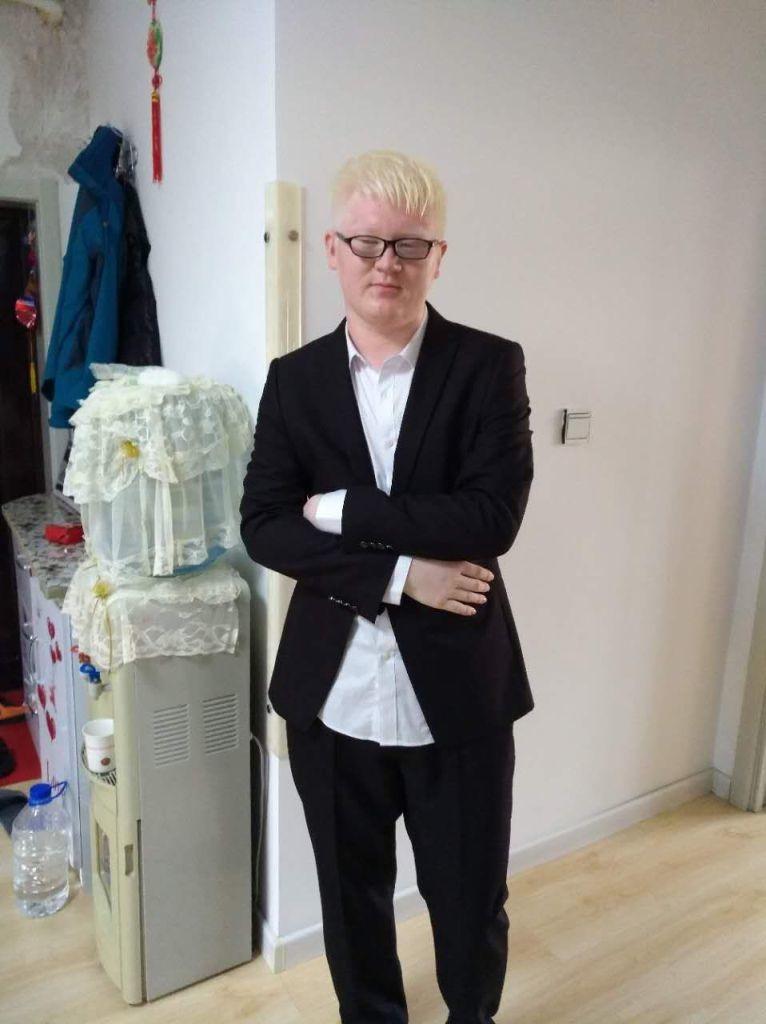 Wang Haoran, from Jilin province, applied for assistance but his request was refused by local authorities. (PHOTO PROVIDED TO CHINA DAILY)

When he was a sophomore in high school, Wang Haoran began paying attention to changes in education policies.

In 2016, Wang, who has albinism and is visually impaired, visited the local higher education admission office in Liaoyuan, Jilin province, six times to apply for assistance when he took the gaokao.

He requested that his test papers carried large-print characters and also asked for the duration of each test to be extended, both of which are listed as required assistive measures by the Ministry of Education.

Initially, the officials told Wang to submit his application along with several documents, including his disabled certificate and a doctor's diagnosis.

However, after he had presented the required documentation, Wang was informed that there was no precedent in Jilin that would allow "special treatment" for students with disabilities. As a result, his application was turned down.

During his senior year in high school, Wang's day began at 5:30 am and lasted until 11:30 pm, regularly punctuated by the ringing of bells that announced classes, break times, self-study periods and extracurricular activities.

Though he sat in the front row of the class, he would speak to his teachers during breaks to ask for clarification because he could not see the blackboard clearly. His teachers also allowed him extra time during mock exams because they assumed that would be permitted in the gaokao.

Wang scored 401 points out of a possible 750 in the exam. His performance was only good enough to gain admittance to Xinglin College at Liaoning University of Traditional Chinese Medicine, where he studied acupuncture and massage, a popular course among visually impaired students.

"It was the major my parents wanted for me because I did not get a high score in the gaokao. They thought it would guarantee a job," the 22-year-old said. 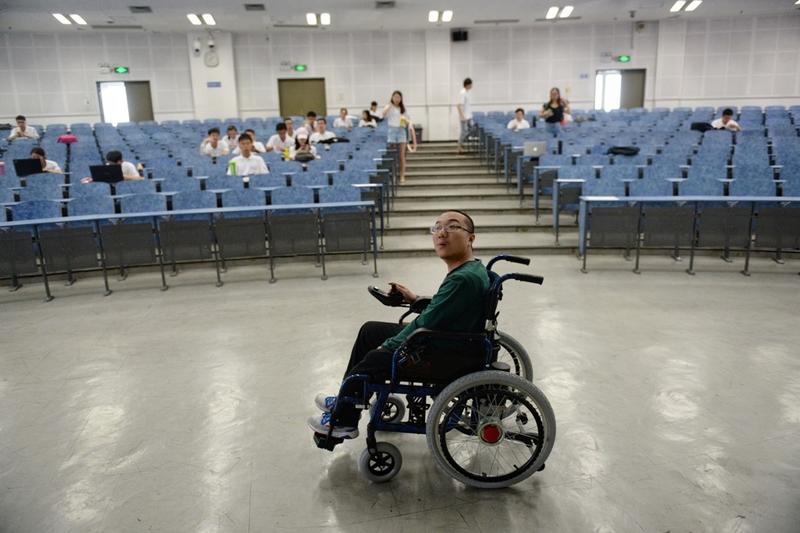 Wei Xiang, from Gansu province, has won a place at Tsinghua University, one of China's top schools. (PHOTO PROVIDED TO CHINA DAILY)

Sometimes, students with disabilities are given assistance after the exam. Wei Xiang, a wheelchair user from a remote city in China's northwest, performed so well in the exam that he was offered a place at Tsinghua University in Beijing, one of the country's most prestigious schools.

The 19-year-old has spina bifida, a congenital condition that affects the spinal column. Although he has had three operations, his condition has not improved, so he either uses his wheelchair or crutches to get around.

The native of Dingxi, a poverty-stricken city in Gansu province, made headlines when a local WeChat account carried a post in which he described his disability and his impoverished family background. He also revealed that he had sought assistance from the university, which he hoped would offer living space for him and his mother, who planned to accompany him.

In response, the university's recruitment office praised Wei's perseverance and diligence, and provided a free dorm for him and his mother.

Han, Wang and Wei all attended mainstream schools from primary level, so it was natural for them to take the gaokao like their classmates.

"These schools usually serve a specific condition, such as a hearing or visual disability, so students who do not fit into those categories are unable to attend," said Sun Tao, a teacher at a special high school, who is visually impaired.

He noted that students with disabilities have traditionally only been provided with limited study choices in higher education. For example, those who attend schools for the blind or visually impaired often become masseurs or piano tuners because colleges usually only offer them those majors or related subjects.

He applauded the recent changes. "This group of people has been waiting for assistance in the gaokao for a long time. Without a doubt, we are making great progress and ensuring that people with disabilities can have convenient and equal access to the exam," he said.

He urged examining bodies to adopt a flexible approach to the regulations.

"Many different and specific needs may arise in the gaokao for people with disabilities, not limited to those listed in the regulations," he said. "I hope all of their needs can be met, within reason."

Zhou Haibing, founder and CEO of Easy Inclusion Consulting in Beijing, which promotes the inclusion of disabled people in mainstream society, said a great deal remains to be done to end discrimination and ensure people are not excluded from activities.

"The assistive measures should be extended to exams at all levels of education, such as the high school entry exam, because many students drop out if their scores are not high enough to gain admittance to high schools or college," he said.

Zhou said teachers should be given more training in inclusive teaching methods, and schools should be provided with sufficient resources to build barrier-free facilities.

He added that inclusive education does not just benefit children with disabilities, but can improve the experience for everyone because teachers learn to accommodate the needs of all learners.