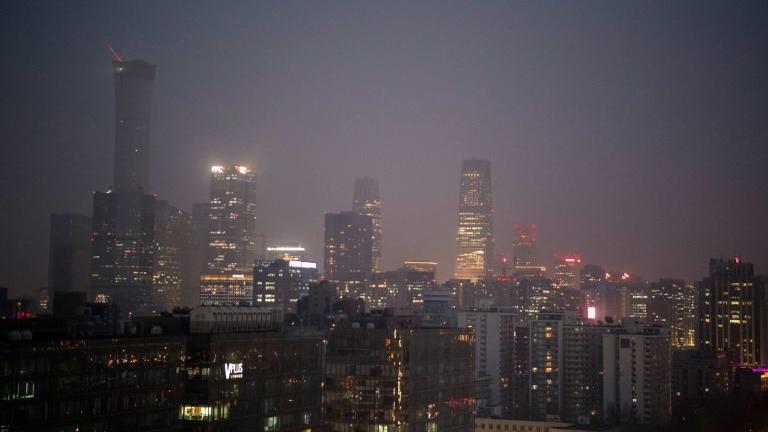 This photo taken on April 16, 2018 shows a general view of the Central Business District (CBD) in Beijing at night amid pollution. (FRED DUFOUR / AFP)

BEIJING - China will start a massive environmental overhaul on June 11 to ensure the effective curb of air pollution in key regions, said sources with the Ministry of Ecology and Environment Saturday.

The inspection is expected to last until April 28, 2019, during which approximately 18,000 environmental supervisors will be dispatched to discover environmental protection problems in the Beijing-Tianjin-Hebei region and the surrounding areas, the Yangtze River Delta, and the Fenhe and Weihe river plains.

A total of 28 cities will be targeted, including 11 cities in the provinces of Shanxi, Shaanxi and Henan in the plains of Fenhe and Weihe rivers, as well as the Shanghai Municipality, and the provinces of Jiangsu, Zhejiang and Anhui in the Yangtze River Delta.

The environmental overhaul will revolve around prominent public complaints, such as emergency responses to cases of heavy pollution, crop straw burning and coal-fired boilers

Although air quality in these areas has kept improving on the whole, pollution remains serious in individual regions, the sources said.

The Beijing-Tianjin-Hebei region is the worst, while in some provinces like Henan and Shandong, the annual share of days with good air quality is less than 60 percent.

In the Fenhe and Weihe river plains, air pollution has worsened in recent years, the sources said.

The supervisors will be professionals selected from local environment protection departments and the ministry to uncover structural problems in industrial development, energy use, transportation and land use that are detrimental to air pollution control.

The inspections will revolve around prominent public complaints, such as emergency responses to cases of heavy pollution, crop straw burning and coal-fired boilers.

Cities failing in their responsibilities will be openly questioned. When necessary, inspection teams at the central level will be sent to supervise local governments, according to the sources.

In a mobilization meeting held Friday, Minister Li Ganjie said the move was to implement the requirements of the central government to fight a good battle against pollution and boost ecological development.

Efforts must be made to curb PM 2.5, a key indicator of air pollution, while iron and steel, thermal power, building materials, bulk coal, diesel-powered trucks will be put under strict scrutiny.

Li said that the inspection is not "a movement" or "a gust of wind", but a long-term mechanism aiming for accurate pollution control, with a fundamental goal to help local governments to solve their problems and improve environmental quality.

"The inspection is an opportunity for local authorities to tackle their prominent problems," he said.

To prevent persistent environmental violations, the ministry has got tougher with environmental supervision. On Monday, the ministry openly summoned senior officials of Shizhu in Chongqing, Yulin in Guangxi and Yichun in Jiangxi, urging them to seriously implement the rectification requirements of the central inspection teams.

Perfunctory responses will not be tolerated, and no one is allowed to seek temporary economic growth at the price of damaging the ecological environment, said the ministry.