By Duan Ting in Hong Kong

Susan Stautberg is celebrating a triumphant 16 years fighting to lift the rights of women in boardrooms around the world. She tells Duan Ting her job will  not stop there as she passes the baton to her successor. 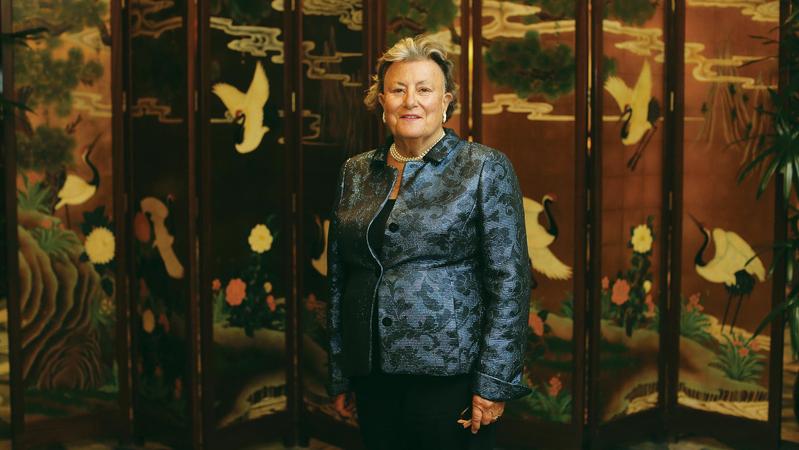 Susan Stautberg, outgoing chief of WomenCorporateDirectors Foundation, says the status of women in the boardroom has now been strengthened after years of painstaking efforts by the organization. (ROY LIU / CHINA DAILY)

A champion, warrior and a paragon of women’s rights and distinction stipple the list of accolades and tributes that have been conferred on Susan Stautberg, and which would be hard to detract.

Inarguably, she has earned her stripes in the long, arduous struggle to stand up and fight for meritocracy and the rights of women in boardrooms across six continents — a crusade that has come to personify Stautberg and her associates for the past 16 years.

In 2001, she and six other senior business peers got together in New York and co-founded the WomenCoporateDirectors (WCD) Foundation — an esteemed global institution which today represents the epitome of women’s leadership and achievements in business, with members serving on more than 8,000 public and private boards worldwide.

The whole idea is to get more qualified women into corporate boards. A good director can save you time and money

In a wide-ranging interview with China Daily, Stautberg, who’s passing the baton to Susan Keating as WCD’s chairman and CEO in a week’s time, poured her heart out on issues that had challenged the status and welfare of women for a long time, praising Asia’s “bright and attractive” women for their unqualified care for the family and prodding them to do more in the corporate arena.

Perceived gender inequality and narrowing the gender diversity gap in corporate boards have been uppermost in her mind. “When we launched this (WCD) 16 years ago, only very few women could make it to the boardroom,” recalls Stautberg, whose impressive career spans business, media and government.

“Basically, male CEOs brought in their best friends rather than the best people on the boards. So, what we asked for was that the management hire professional experts rather than the people they knew for those positions.”

According to Stautberg, just 11.7 percent of all the directors on the Fortune 1000 company boards in 2000 were women. To her, it was a pathetic sight, with women’s voice not as strongly heard in the boardroom, and neither was there a platform linking women directors to allow them to learn and solicit support from each other.

They ultimately got the foundation up and about, and started off by inviting other company directors to join in before spreading its wings to cities beyond New York. In its infancy, the foundation saw some of the biggest names in US business throw their weight behind them.

Northern Trust — the Chicago-based financial services and asset management colossus — gave WCD some money to help it launch its first logo, while KPMG — one of the world’s “Big Four” auditors — came up with a donation that was used to get some conferences off the ground, starting from New York, and global leadership consulting group Spencer Stuart also lent a hand.

The WCD then began setting up different “chapters” around the country and took on the world in 2008 by launching its London chapter, hosting conferences in the US, Asia and Europe, and growing under the continued auspices of Northern Trust, Spencer Stuart and KPMG, according to Stautberg.

By the latest count, the foundation has 80 chapters across the globe, with new branches opening each year. But, the mission is by no means fully accomplished. “The whole idea is to get more qualified women into corporate boards,” says Stautberg. “A good director can save you time and money.”

The foundation hosts four conferences around the world each year, discussing the latest developments in the business scene, while branches in each city organize four dinner events annually to allow members to share their insights into various topics. Reports are released every year, drawing on the deep experiences of members, as well as the research of thousands of company directors globally.

Stautberg reminisces that, several years ago, they had spent a month helping Chile’s stock exchange to get a female professional into a company’s board that had been dominated by 11 men.

“Also, a major insurance company in the US came to me a few years ago saying it couldn’t find a woman director with the knowledge and expertise of working in Asia. I then recommended, several successful women leaders, including someone who had previously worked with Morgan Stanley in China building up their China team and who was then working in the US to be with her family. We do know women who’re qualified and can show them the opportunities every month.”

WCD set foot in Asia in 2010, initially in Hong Kong, before expanding to Beijing, Shanghai and Singapore, according to Stautberg.

“Asian women are so bright, attractive and particular, but the progress of getting them on board is very slow,” laments Stautberg.

The foundation inaugurated its 79th chapter in Myanmar on Oct 2 this year, and Myanmar became its 16th branch in Asia.

In Myanmar and other parts of the Asian continent, Stautberg sees a new generation of women taking over key leadership roles in eminent, private enterprises that dominate the region. In Myanmar, many women say they want to build up their country to attract more foreign investment, but good governance is one way to win over foreign investors.

Regarding her suggestion to get more Chinese women onto corporate boards, Stautberg agrees it’s important for them to care about their families, but it’s also critical for them to be able to get out and build up a network of friendships.

“Life is one such big interview. If you’re not around, people won’t know more about you and propose you. We gotta learn things and go for it.”

“You gotta be seen as an expert in front, and not lagging along behind. You need to go to conferences and speak. Success doesn’t find you and you’d better go out and build success for yourself.”

Stautberg finds solace in that Western companies are now willing to hire professionals with a Chinese background as board directors if they’re prepared to travel and get into Chinese markets, and she has been seeing Chinese women on US and European boards.

She thinks Hong Kong does live up to its name as a world city — it’s very international and a special place with “melting minds and knowledge” where people feel they can see many things and do many things, as well as meeting anybody wanting to try new things, and Hong Kong women are well-dressed and hard working.

According to the WCD, it now has a total of 3,500 members hailing from 80 countries in North, Central and South America, Europe, Africa, the Middle East, Australia, New Zealand and India. It has driven greater boardroom participation and engagement for women, including those in Asian countries with a heavy imbalance in board gender representation.

WCD members are serving on some 10,500 corporate boards around the globe, mostly in public, private or family enterprises. The total market capitalization of the public companies served by WCD members has surpassed US$8 trillion.

The organization announced in September that Stautberg, after 16 years at the helm, will be succeeded on Dec 1 by another member, Susan Keating, who’s president and CEO of the National Foundation for Credit Counseling.

‘Life is never a street ahead, you may go sideways’

Susan Stautberg, chairman and chief executive officer of the WomenCorporateDirectors (WCD) Foundation, grew up in Philadelphia and has been working in New York for many years.

She had a stint in the media, working as a journalist for several years below joining the White House fellowship program which launched her into politics. In 2001, she co-founded the WCD with several other friends who were senior executives of prominent enterprises.

“As a journalist, you’re paid to be curious about what’s going on and what makes things happen. You need to be confident in dealing with people and ask questions and write things clearly, which is great training and prepares you to work anywhere.”

Stautberg tells the younger generation: “You have to be prepared to be flexible. Life is never a straight street, it is like a jungle gym where you may go sideways. You have to be open to all kinds of experiences because every new assignment gives you connections and give you ways of seeing what’s happening in the world.”

As a woman leader, knowing how to strike a balance between work and life is important. “You cannot get all you want, and you’ve to figure out what is most important to you at different times of your life.”

“You also need to have a little schedule,” says Stautberg. “If you try to work on a big project, you may have to get up at 5 in the morning and start working on your project till 7 when your children get up. If you try to get a PhD, you may see yourself disappear for hours on Saturday until your children cry out for ice cream.”

“What I’m trying to do now is to exercise and read every day. At the moment, I’m writing a fascinating book on betrayal in both business and love.”

Stautberg has published a book entitled Women on Boards and is working on another one which is about betrayal.

“When a man is betrayed, he normally thinks about how to move forward. But, when a woman is betrayed, she tends to take it personally and over-react, wasting a lot of time thinking more about what and where she had gone wrong.”