HONG KONG – The academic circles in Hong Kong were saddened by the death of Stephen Hawking, the best-known theoretical physicist of his time on Wednesday.

Hawking, who sought to explain some of the most complicated questions of life while himself working under the shadow of a likely premature death, died on Wednesday at the age of 76 at his home in the British university city of Cambridge.

His contributions to science, especially his discovery of what is now universally known as Hawking Radiation emitted by black holes, will long be remembered as among the greatest achievements of 20th century science

“Stephen Hawking was remarkable in so many ways – as a scientist, as a role model (for strong will and determination), and as an ambassador for science and the creative spirit of humankind,” said Andrew Cohen, director of the Institute for Advanced Study of Hong Kong University of Science and Technology (HKUST).

IN PICTURES: When Hawking was in Hong Kong...

In his first visit to Hong Kong in 2006, the British scientist delivered an inaugural lecture for the Institute for Advanced Study at the HKUST. In the lecture, Hawking shared with local teachers and students his discoveries that have an enduring influence on the field of physics.

“His contributions to science, especially his discovery of what is now universally known as Hawking Radiation emitted by black holes, will long be remembered as among the greatest achievements of 20th century science,” said Cohen.

Cohen, who met Hawking many times, said he was pretty much impressed by his wit, sense of humor and adventurous spirit.

Recalling his first encounter with Hawking at Harvard University when he was a graduate student, Cohen said he still carries the fond memories.

“He came to our university to deliver a colloquium. At that time he was still able to speak without assistance, although he required the aid of a graduate student to clarify his speech,” Cohen recalled.

“He was the best known physicist of his generation,” said Shyy Wei, the incoming President of Hong Kong University of Science and Technology (HKUST).

Even after so many years, many on the campus talk about Hawking’s 2006 visit to the HKUST, he said.

During the 2006 visit, the British scientist even set aside a day to visit the city’s famous tourist attraction, the Victoria Harbour laser play, and took a boat visit at the harbor.

“People were intrigued by his life story, peers held his intellectual contributions in high regard, and the public appreciated and learned from him the insight and comprehensible explanation of some of very difficult and specialized topics,” added Shyy. 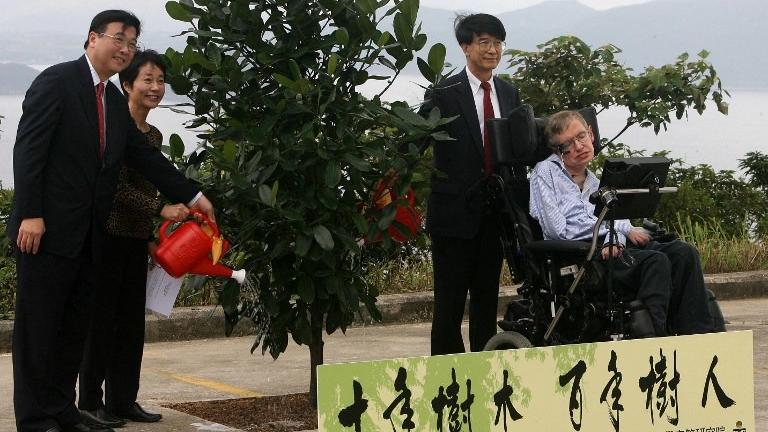 Professor Stephen Hawking (right) from The University of Cambridge during a press conference and tree planting ceremony at the Hong Kong University of Science and Technology accompanied by Paul Ching-wu Chu (second left) then-HKUST President and other officials in Hong Kong, June 13, 2006.  (MIKE CLARKE / AFP)

Hawking’s second contact with the city was a “virtual” visit in March last year. He was brought live to the Hong Kong Science Park for a 90-minute lecture through the use of augmented reality holographic technology.

In the virtual interaction with Hong Kong audience, he touched many issues ranging from the origins of the universe, to his personal life, to current affairs, with his contagious flash of humor.

George Smoot, the 2006 Nobel Prize winner in Physics and a professor with the Institute for Advanced Study, HKUST, said the greatest impression that Hawking left on him was his strong spirit.

"He didn't give up because of disease. Instead, he worked even harder and became even stronger. He had a brilliant mind and offered the world many great insights that inspired the world's scientists. He made life possible." 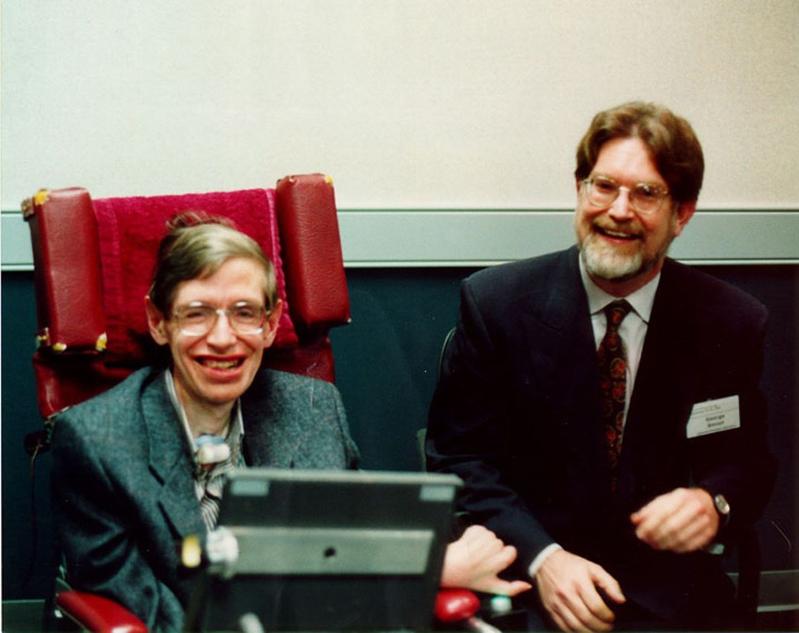 In this undated photo, British scientist Stephen Hawking and George Smoot, the 2006 Nobel Prize winner in Physics and a professor with the Institute for Advanced Study, Hong Kong University of Science and Technology, are seen at the University of California at Berkeley. (PHOTO COURTESY OF PROFESSOR GEORGE SMOOT)

Saying that they got to know each other since the mid-‘70s, Smoot said he had lots of memorable encounters with the British scientist in conferences around the globe.

"Scientifically, we help each other, and in some ways, we compete each other," Smoot joked.

Smoot sees Hawking's death as a loss for the world's science of physics, hoping that budding physicists of today's generation will follow Hawking's step. "There're some young talents in physics already emerging."