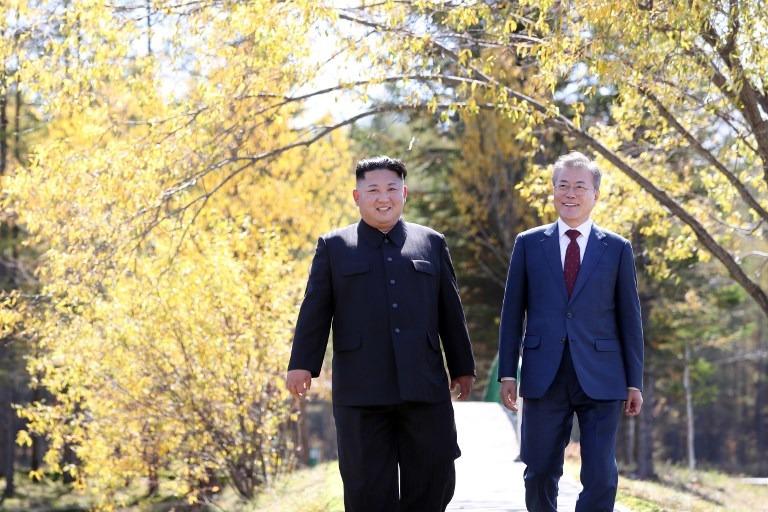 Leader of the Democratic People's Republic of Korea Kim Jong-un (left) and the Republic of Korea (ROK)'s President Moon Jae-in walk together during a visit to the Samjiyon guesthouse near Mount Paektu in Samjiyon, Sept 20, 2018. ROK's Unification Ministry in charge of inter-Korean relations said on March 29, 2019 that it will push for Kim's visit to Seoul this year. (PHOTO / PYEONGYANG PRESS CORPS / AFP)

SEOUL/WASHINGTON — The Republic of Korea (ROK)'s Unification Ministry in charge of inter-Korean relations said Friday that it will push for top leader of the Democratic People's Republic of Korea (DPRK) Kim Jong-un's visit to Seoul this year.

The ministry said in its 2019 work plan, submitted to the National Assembly, that through Kim's visit to Seoul, ROK will try to create a virtuous cycle of improved relations between the two Koreas and between the DPRK and the United States and the denuclearization of the Korean Peninsula.

The ROK government will try to regularize inter-Korean summits as well as high-level talks this year to lay a firm groundwork for relations between the two Koreas, the Seoul ministry said

The Seoul ministry said the ROK government will try to regularize inter-Korean summits as well as high-level talks this year to lay a firm groundwork for relations between the two Koreas.

ALSO READ: ROK to push for military talks with DPRK this year

It added ROK will seek to create conditions for the resumption of the currently stalled inter-Korean cooperation projects, the Kaesong Industrial Complex and the tours to Mount Kumgang.

The jointly-run factory park in the DPRK's border town of Kaesong and tour by ROK people to the DPRK's scenic resort of Mount Kumgang have been suspended since 2016 and 2008 respectively.

To tackle the humanitarian issue, the ministry will seek to regularize the video reunions and the exchange of video letters between the Korean families separated by the 1950-53 Korean War.

The Seoul ministry also noted that through inter-Korean dialogues, ROK will seek to encourage the DPRK to take denuclearization steps and help facilitate the denuclearization negotiations between Pyongyang and Washington.

Moon to meet Trump in US

According to ROK's presidential Blue House, ROK President Moon Jae-in will visit Washington next month for a summit meeting with US President Donald Trump.

Senior Blue House press secretary Yoon Do-han said at a press briefing Friday that President Moon and first lady Kim Jung-sook will visit the United States from April 10-11 at the invitation of President Trump and his wife Melania Trump. 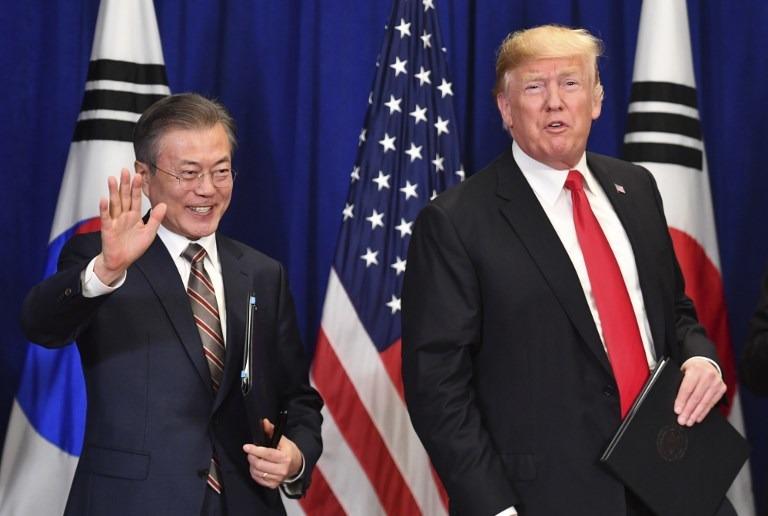 US President Donald Trump (right) and the Republic of Korea's President Moon Jae-in smile after signing a trade agreement at a bilateral meeting in New York, Sept 24, 2018. (NICHOLAS KAMM / AFP)

The White House said in a statement late Thursday Trump will welcome Moon at the White House on April 11, and the two leaders will discuss the latest developments regarding the Democratic People's Republic of Korea (DPRK) as well as bilateral relations.

According to Yoon, Moon and Trump will make an in-depth discussion on ways to strengthen the bilateral alliance further and to build a peace regime on the Korean Peninsula through the complete denuclearization of the peninsula.

Moon will visit the US from April 10-11 and meet Trump on April 11 at the White House, according to ROK's presidential Blue House and the White House

The Moon-Trump summit comes after the second summit between Trump and DPRK's top leader Kim Jong-un ended with no agreement in late February in Hanoi.

Following the second Kim-Trump summit, the US president told Moon via phone that the ROK president would play a role compromising denuclearization negotiations between Pyongyang and Washington.

Moon has also said he would broker a compromise between the DPRK and the US for permanent peace on the Korean Peninsula and the Peninsula's complete denuclearization.

Earlier this month, ROK's foreign ministry said Seoul would focus on helping resume dialogue between the DPRK and the United States for the rest of the year.

The US State Department also said on Thursday Secretary of State Mike Pompeo would meet with his ROK counterpart Kang Kyung-wha in Washington on Friday.

It will be the first face-to-face meeting since Shanahan took the Pentagon post in January, according to the Seoul ministry.

During the meeting, the two defense chiefs will share their assessments on the security situation on the Korean Peninsula following the second Trump-Kim summit.

Jeong and Shanahan will also discuss how to support diplomatic efforts militarily for the denuclearization of the Korean Peninsula and denuclearization negotiations between Pyongyang and Washington.