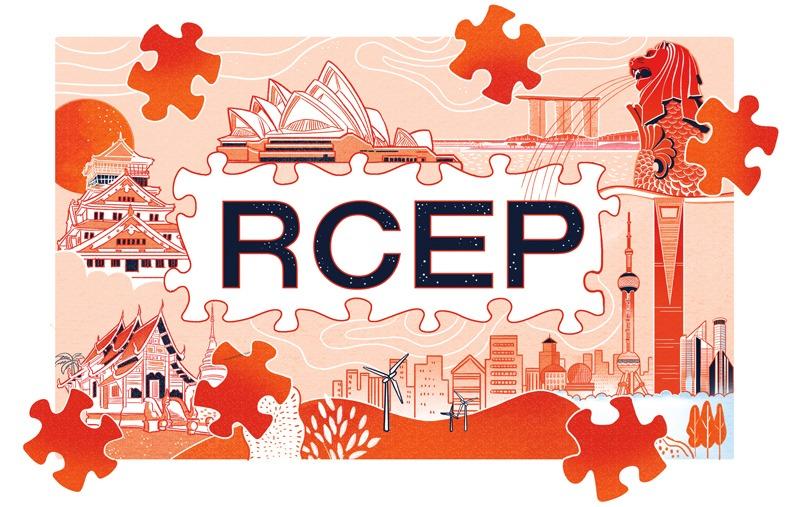 The 35th ASEAN meeting held in Bangkok declared on Monday that the Regional Comprehensive Economic Partnership negotiations had concluded after six years of negotiations.

The RCEP is a 16-member economic grouping, comprising 10 member states of the Association of Southeast Asian Nations and six of ASEAN's free trade agreement partners－Australia, China, India, Japan, New Zealand and the Republic of Korea.

India has decided to stay away from the RCEP, as some of its outstanding issues could not be resolved. Yet other RCEP members are expected to work with India in an effort to resolve these issues, and if it is satisfied that its concerns have been addressed, it could join the regional partnership at a later date.

However, even without India, the RCEP is a large free trade agreement, as it will bring 15 economies under a set of common trade rules that would comprise common tariffs, rules of origin, investment provisions and other trade issues including intellectual property management, competition policy and e-commerce.

Both big and small economies in group

The RCEP is unique as an FTA as it includes some of the world's largest economies (China and Japan), high per capita income economies (Singapore, New Zealand, Brunei and Australia), major industrialized economies (Japan, the ROK, Singapore and China), middle-income economies with vast natural resources (Malaysia, Indonesia, Thailand, the Philippines and Vietnam) and less-developed, low-income economies (Cambodia, Laos and Myanmar). Indeed, the RCEP is a heterogeneous grouping allowing lots of scope for economic synergies and complementary economic opportunities.

An interesting aspect of the RCEP is its ASEAN-centrality. All non-ASEAN members of the RCEP are connected to ASEAN through existing ASEAN+1 FTAs, and the RCEP is expected to supersede all these FTAs over time. In the process, it is expected to encourage and enlarge economic relations between ASEAN and the other RCEP members.

The prospects are particularly strong with respect to ASEAN and China. ASEAN is already the second-largest trading partner of China, and the implementation of the RCEP from 2022 should see much greater trade and investment between China and ASEAN with a positive influence on regional value chains that connect both of them.

Another interesting aspect of the RCEP is its much wider scope. Compared with the existing ASEAN+1 FTAs, the RCEP reflects much greater access. This will be made possible by the elimination of tariffs on almost 90 percent of traded goods; updated rules of origin allowing the scope of value addition through the entire RCEP geography; stronger provisions on trade in services and cross-border foreign investment; and new rules on facilitating trade in e-commerce.

A versatile, modern and new-generation pact

By acquiring a greater scope and including many more new issues, the RCEP promises to be a more versatile, modern and new-generation trade agreement. It reflects the more modern developments in global trade and would encourage member states to take part in such trade on the basis of their respective comparative advantages. For instance, the RCEP is expected to contribute to the growth of digital trade, as well as financial, telecommunications, transport and tourism sectors.

The RCEP was conceptualized at a time when the US was leading negotiations among a group of Asia-Pacific economies on the Trans-Pacific Partnership agreement. However, the US withdrew from the TPP after Donald Trump became president. And although the remaining TPP members came together to revive the agreement as the Comprehensive and Progressive Trans Pacific Partnership, it lost a lot of its economic and strategic importance following the exit of the US.

The decline in the importance of the TPP turned the Asia-Pacific's attention to the RCEP. And compared with the CPTPP, the RCEP is much larger in that has as its members bigger economies with larger populations.

It is also a more "inclusive" FTA as it includes less-developed, low-income as well as high-income and middle-income economies.

In fact, the RCEP's importance is evident from the fact that CPTPP members such as Japan, Australia and New Zealand also worked actively to conclude the RCEP negotiations. Clearly, these countries visualize new opportunities through the RCEP, ones they didn't or don't see in the CPTPP.

Yet another notable feature of the RCEP is the ability of its members to conclude the agreement at a time when trade frictions are visible across the world. Even among RCEP members, Japan and the ROK have recently had serious problems leading to some export restrictions. And in the recent past, the South China Sea issue had raised tensions between China and some ASEAN member states, which has since defused.

But the RCEP members overcame these challenges and concluded the RCEP negotiations. Which sends a positive signal for global trade at a time when several countries are looking to use trade to fulfill their narrow geopolitical objectives.

The author is a senior research fellow and research lead (trade and economic policy) at the Institute of South Asian Studies, National University of Singapore.

The views don't necessarily represent those of China Daily.