By Carmen Ho in Hong Kong

Times of change have always meant opportunities for Hong Kong, which remains a key financial hub for the region 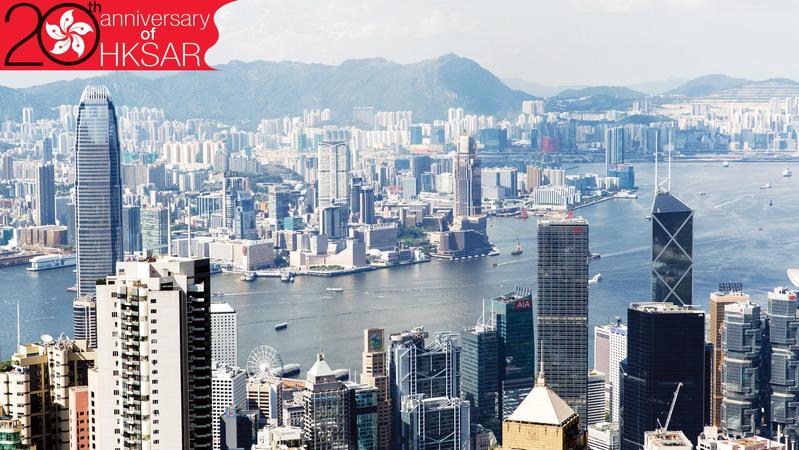 Twenty years after Hong Kong’s return to China in 1997, the special administrative region has kept its position as a world-class city within Asia.  (AFP)

Amajor financial center and Asia’s barometer for globalization, Hong Kong continues to play a pivotal role in the region’s development.

As the city marks the 20th anniversary of its handover from Britain back to China on July 1, the economic landscape is still evolving. Traditionally the middleman between the Chinese mainland and the world, Hong Kong has leveraged world-class legal and financial systems to serve as a strategic pivot for countries in Asia to grow.

“Over the years, Hong Kong has become a bigger international financial center. Through the stock exchange and the banking industry, Hong Kong has made itself even more important in the global financial industry,” said Chen Zhiwu, director of the Asia Global Institute and professor of economics at The University of Hong Kong.

On the basis of its unparalleled financial and legal expertise, Hong Kong serves as a powerful connector for China to Southeast Asia’s land and labor. With prosperity in China and Southeast Asia intertwined, Hong Kong plays an increasingly important role.

This is particularly relevant given that, according to HSBC, Asia Pacific’s share of global exports is forecast to rise to 46 percent by 2050, with Western Europe’s sliding to 22 percent and North America’s to 10 percent.

2.3 percent, rate of growth for Hong Kong’s economy over the last five years

With that in mind, Hong Kong has carved itself a niche with top-tier businesses, human capital, information exchanges and cultural experience, said Martin Roll, a Singapore-based adviser to Fortune 100 companies and governments on leadership, strategy, brand marketing and globalization.

“Since 40 years ago, Hong Kong has been viewed as the entrepreneurial star of Asia,” he said. “As the gateway to a rising China, Hong Kong held an unmatched advantage.”

Hong Kong and the Chinese mainland have an extraordinary degree of economic interdependence.

In 2016, 54 percent of the city’s reexports went elsewhere in China, according to the Hong Kong government. With just 7 million people, Hong Kong is the Chinese mainland’s second-largest trading partner after the United States, accounting for 8.3 percent of its total trade in 2016.

The world’s most expensive high-speed rail, linking Hong Kong and the mainland, is under construction along with a 30-kilometer system of bridges and tunnels connecting Hong Kong, Macao and Zhuhai in the southern Guangdong province.

Hong Kong is negotiating free trade agreements with various countries in the Association of Southeast Asian Nations, while remaining a major source of investment for several emerging markets, including India, Indonesia, Myanmar, Thailand and Vietnam.

But the city now faces intense competition from other Asian cities and, as the world focuses more on the Chinese mainland, its relative importance may be dropping.

“Hong Kong’s trading has declined to some extent because of the rise of many different ports and trading centers in the mainland,” said Chen of the Asia Global Institute.

Once the world’s busiest container port, Hong Kong has fallen to fifth place, according to the World Shipping Council. Shanghai has held the top spot since 2010.

Roll said the city “still remains a key investment hub with its free trade laws and is favored for its rich history of collaboration with China”.

“Hong Kong does indeed have a long history of globalization, in terms of trade, human capital, information exchange, foreign investments and talent inflow,” Roll said. “There is a lot of potential for Hong Kong to rise up again in global visibility as one of the leading Asian cities.”

Hong Kong’s economy took off in the 1970s, when annual GDP growth averaged 8.9 percent. The 1980s saw a slowdown to an average 7.4 percent as the city’s economic development consolidated.

The next two decades were marked by volatility. Average annual growth between 1997 and 2002 dropped to just 1.9 percent due to the Asian financial crisis in 1997-98, the global economic slowdown in 2001 and the outbreak of severe acute respiratory syndrome in early 2003. Between 2003 and 2006, growth bounced back to 6.3 percent.

For the last five years, Hong Kong’s economy has grown at an average of 2.3 percent.

“Back in 1997, many people also thought that was the end of Hong Kong because China was becoming more open and international,” Chen said.

“People thought Hong Kong’s role would be diminished, but what we have seen for the most part is that Hong Kong has made itself into a much bigger international financial center.”

For 23 consecutive years, The Index of Economic Freedom by US think tank The Heritage Foundation has ranked Hong Kong as the world’s freest economy. With zero tariffs, strong property rights and a low overall tax burden at just 15.7 percent of GDP, its business environment is one of the most transparent and efficient in the world.

But there are some challenges on the horizon. According to Economy Watch, Hong Kong’s gross national savings rate declined from 36 percent in 2008 to 25 percent in 2016, while the Hong Kong dollar, pegged to the US dollar since 1983, may have to adapt to higher interest rates.

“Hong Kong needs to consider how it can play a stronger role in partnering with developing Asian cities to unlock economic and business opportunities,” Roll said.

The China-led Belt and Road Initiative, building a trade and infrastructure network to revitalize the ancient Silk Road routes, may help. Hong Kong can serve as a major fundraising hub and continue with its role as a key offshore yuan hub with the world’s largest yuan liquidity pool, already handling around 20 percent of the mainland’s international trade.

“Hong Kong should become even more internationally oriented. The unique strengths of Hong Kong cannot be overtaken for many years to come,” said Chen.