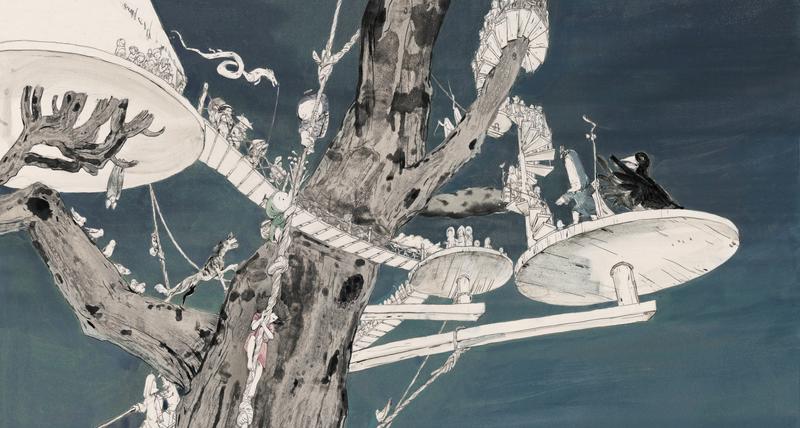 In the Anthology of Tales From Records of the Taiping Era published in the Song Dynasty (960-1279), there are elf-like creatures named Mu Ke, who are shy and mysterious, as short as human kids and they make handicrafts.

"I created a whole world for the series, with the stories set in a rather complete and independent world, a sort of mysterious oriental fairyland."

They are now the stars in artist Xiong Liang's new book series, Little Mu Ke, where they always wear hoodies made of plant fiber and live in the peach blossom forest, a fantasy place where humans have always yearned to go.

On Aug 29, the first two books of the Little Mu Ke series were launched in Beijing, which is Xiong's first new work in three years. The books are also his first work after he was shortlisted for the Hans Christian Andersen Award for illustration in 2018, which made him the first Chinese artist to be shortlisted for the award since its inception in 1956.

Xiong, a fan of forests since young, wants to share his love for the forests with his readers. And he recalls a time of enlightenment when he was exploring a local forest while he lived in Canada years ago. 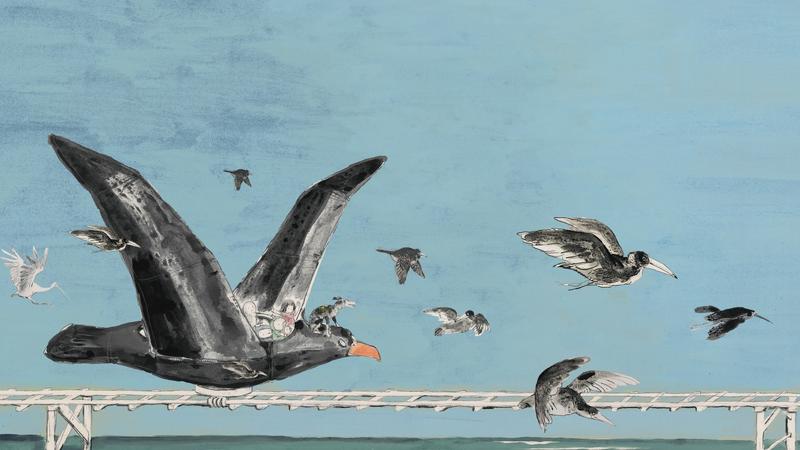 "Usually forest explorers have a safe line they draw to indicate where to stop," he recalls, speaking of that time, "but one day I did go a lot further, and a whole new world unfolded itself－layers of fallen leaves piled up on the ground, not trodden on by a human step; and when I whistled all the birds were flying down from the trees and squeezed on the floor to watch me."

Xiong's new book is unlike his previous picture books which were based on one idea, and he would draw just 32 pages. For the new book series, he plans 12 volumes with hundreds of thousands of words. It's not a picture book or a novel, and Xiong calls it "graphic children's literature", as each book has 20,000 words and each page has drawings.

"I created a whole world for the series, with the stories set in a rather complete and independent world, a sort of mysterious oriental fairyland," says Xiong, adding that he illustrated the stories in the style of Chinese ink-and-wash paintings, and for some scenes, he first printed out 3D models and painted accordingly. 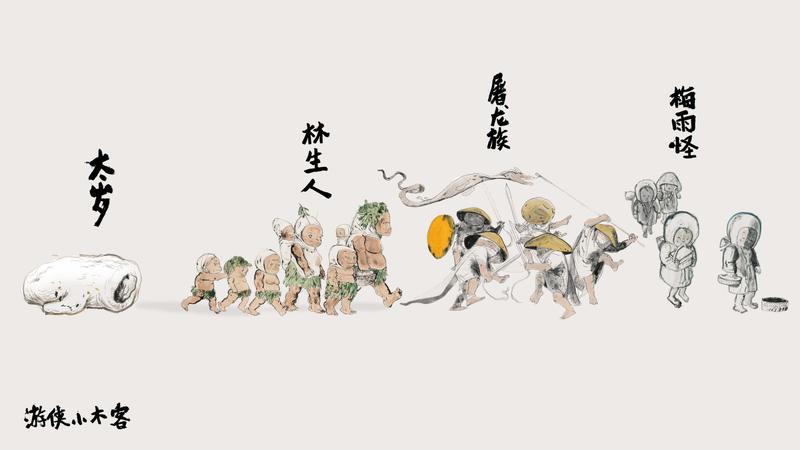 The first book tells of Mu Ke who set several obstacles to avoid intrusion by humans, and how a curious 11-year-old girl Xiao Yu accidentally crosses all the barriers with her new friend nicknamed Little Mu Ke. The second book is about the girl's continuing journey where she disguises herself as a dandelion and attends an event to celebrate the birth of a baby Mu Ke with all residents in the forest. Then suddenly the baby disappears and everyone begins to look for it.

Most of the figures in the story are inspired by those from ancient Chinese classics such as Peach Blossom Spring, Zhuangzi and Shanhaijing (The Classic of Mountains and Seas).

Speaking about the new books, a friend of Xiong says his new series had created a dreamland like that in Alice in Wonderland, yet depicting purely Chinese images as seen in Shanhaijing.

Xiong is a fan of stories in classical Chinese works, and he says he believes that figures such as the Monkey King or Nezha are already known to the world, so he has picked fresh images and stories from even earlier and harder-to-understand Chinese myths for his stories. 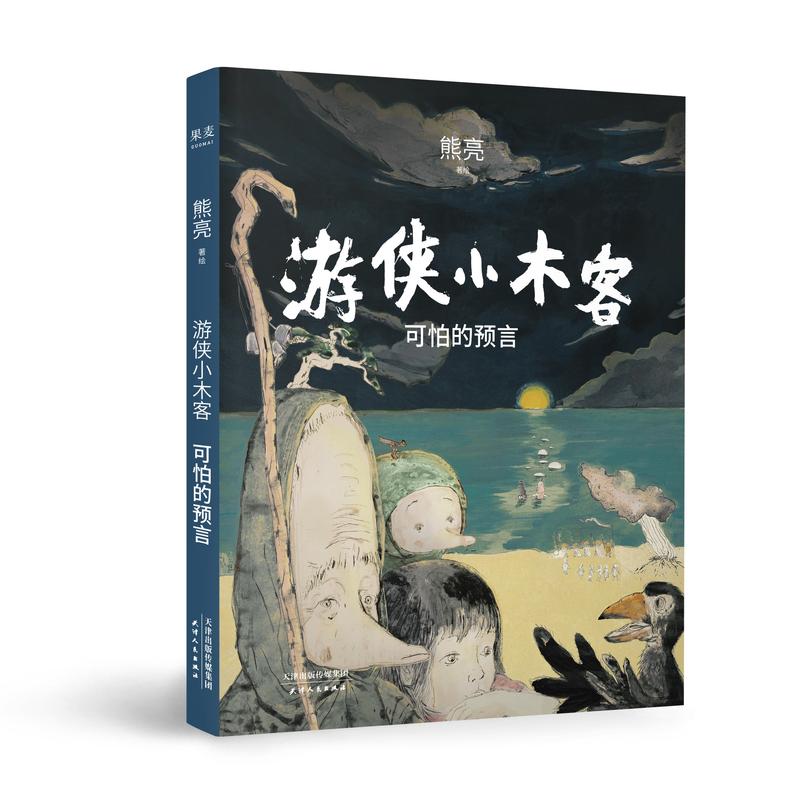 Each figure also has its own image. Xiong worked them out in his mind after creating them with his pen. He also wrote a biography for each figure in the whole series to help him and his team better understand the whole story and paint accordingly.

Xiong, who has been a fan of martial arts novels since young, also has a habit of drawing each new character from the books he reads.

The author, who was born in July 1975 in Jiaxing, Zhejiang province, began studying traditional Chinese ink-and-wash painting at an early age, and has had his own studio since the age of 5, thanks to his father's support. "My father gave me a personal space, and he still has the images I drew for each martial arts novel I read long time ago."

Xiong was nominated for the International Andersen Illustrator Award in 2014 for his works. So far his works include Chinese Edition, The Little Stone Lion, The Beijing Opera Cats, Wandering With the Wind and The Solar Terms.

Xiong Liang examines the illustrations he has drawn for the Little Mu Ke series at his studio in Beijing. (PHOTO / CHINA DAILY)

Xiong uses the forest as the main scene in the first book of Little Mu Ke series, and some of the scenes are based on ancient Chinese classics. 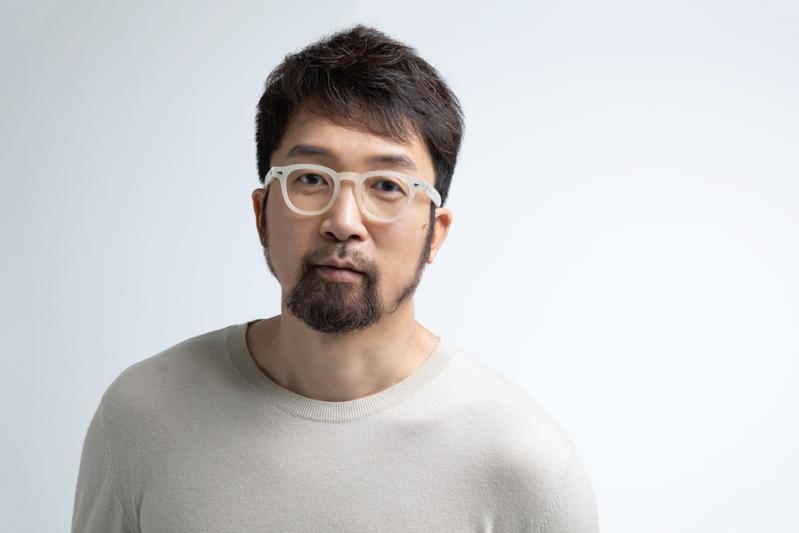 The books are mainly for children aged 7 and above, and adults can also enjoy them, says Xiong, adding: "I hope adults can find their childhood in the story of Little Mu Ke, while experiencing many adventures together with him. Like us, he faces and deals with lots of pressure and problems, but he is always honest and believes in equality for everything in the world."