At odds on many fronts, US and Russia hope for better ties 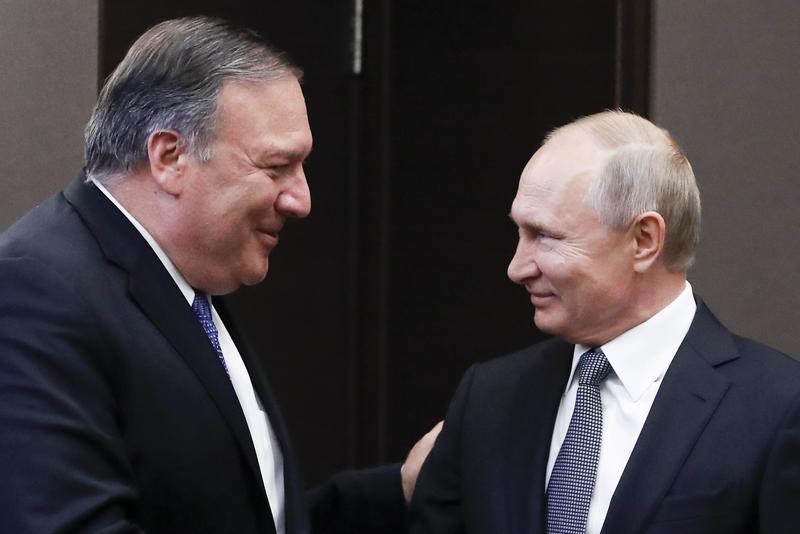 Russian President Vladimir Putin, right, and US Secretary of State Mike Pompeo, greet each other prior to their talks in the Black Sea resort city of Sochi, southern Russia, May 14, 2019. (PAVEL GOLOVKIN / AP)

With tensions running high over Iran, Syria, Ukraine and Venezuela, Russian President Vladimir Putin claimed vindication from the investigation into Russia's interference in the 2016 US presidential election and said he thought it was time to move on. Meanwhile, Secretary of State Mike Pompeo conveyed President Donald Trump's interest in restoring better ties.

In the highest-level face-to-face contact between the two countries since special counsel Robert Mueller's report was released last month, Putin told Pompeo he hoped relations with the US would now improve.

Still, his claim of vindication covered only allegations that Russia and the Trump campaign colluded to hurt Hillary Clinton's candidacy. Putin did not address Mueller's conclusion that Russia actively interfered in the election.

"However exotic the work of special counsel Mueller was, I have to say that on the whole he has had a very objective investigation and he confirmed that there were no traces whatsoever of collusion between Russia and the incumbent administration, which we said was absolutely fake," Putin said as he opened the meeting with Pompeo in the Black Sea resort of Sochi.

"As we said before there was no collusion from our government officials and it could not be there. Still, that was one of the reasons for the certain break in our inter-state ties," he said. "I'm hoping today that the situation is changing."

Though Putin said the Mueller report did not find collusion, the report explicitly notes that collusion is not a legal term and that prosecutors instead searched for evidence of a criminal conspiracy between the Trump campaign and Russia. Mueller's team ultimately concluded that the evidence did not establish such a conspiracy.

Pompeo did not specifically mention election meddling in his brief reply to Putin, although he did say the Trump administration would "protect our nation's interest." Earlier, though, Pompeo made clear that any repeat of the 2016 meddling would not be tolerated.

"Interference in American elections is unacceptable," Pompeo told reporters at a news conference with Russian Foreign Minister Sergey Lavrov. "If Russia were to engage in that in 2020, it would put our relationship in an even worse place than it is. We have encouraged them not to. We wouldn't tolerate that. Our elections are important and sacred and they must be free and fair."

After meeting with Putin, Pompeo told reporters: "So it's not about moving on. It's about trying to find solutions, compromises, places where there are overlapping interests you can make progress unlocking some of the most difficult problems that are facing us."

For me, it created the impression that the president intends to restore Russian-American connections and contacts to resolve joint issues that present mutual interests

Putin told Pompeo his recent telephone conversation with Trump raised hopes for an improvement in relations.

"As you know, not long ago, a few days ago, I had the pleasure of talking with the president of the United States by telephone," he said. "For me, it created the impression that the president intends to restore Russian-American connections and contacts to resolve joint issues that present mutual interests."

Pompeo spoke of "truly overlapping interests" that the two countries "can build on, and most importantly, President Trump very much wants to do that." He cited cooperation in Afghanistan and counterterrorism more broadly, but also a shared goal of getting North Korea to abandon nuclear weapons. But he also told Putin that "just as you will, we'll protect our nation's interest."

Venezuela was a key point of discussion and difference, with the US firm in its commitment to support opposition figure Juan Guaidó as the country's legitimate leader and Russia equally firm in its backing of embattled President Nicolas Maduro.

Pompeo and Trump's national security adviser John Bolton have repeatedly accused Russia, along with Cuba, of propping up Maduro and demanded that Russian and other foreign troops, intelligence officers and security forces leave the country.

"On Venezuela, we have disagreement," Pompeo said. "We want every country that's interfering in Venezuela to cease doing that."

Lavrov defended Russia's position and said the threats Maduro's government is receiving from US officials, coupled with Guaidó's seeming support for a foreign military intervention, "bear no relation to democracy."

Iran was another critical agenda item amid spiraling tension between Washington and Tehran that some fear could lead to conflict. The US has accused Iran of threatening to attack American interests in the Middle East and suggested that Iran or Iranian proxies are behind incidents of alleged sabotage on Emirati, Norwegian and Saudi tankers in the Persian Gulf. 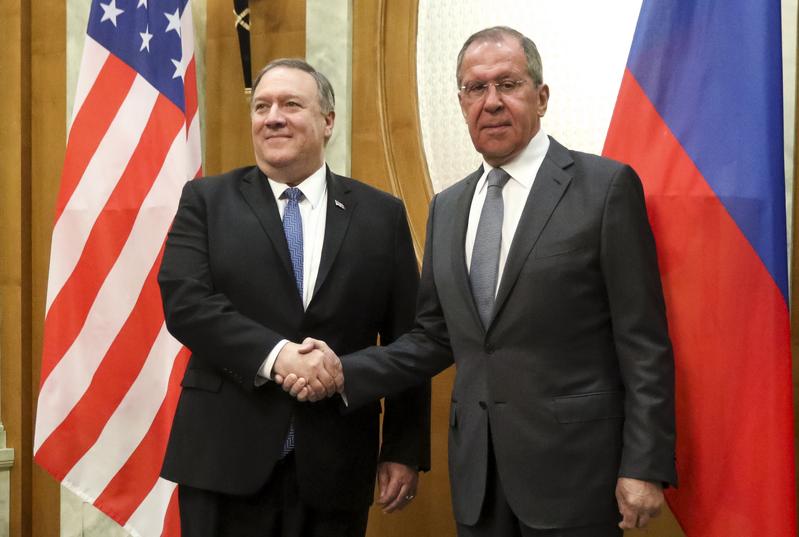 US Secretary of State Mike Pompeo, left, and Russian Foreign Minister Sergey Lavrov pose for a photo prior to their talks in the Black Sea resort city of Sochi, southern Russia, May 14, 2019. (RUSSIAN FOREIGN MINISTRY PRESS SERVICE / AP)

To deter those threats and counter any possible attack, the US sent an aircraft carrier and B-52 bombers to the Middle East, heightening already high levels of unease caused by the re-imposition of US sanctions on Tehran following Trump's withdrawal of the US from the 2015 Iran nuclear deal last year.

Pompeo sought to alleviate some of the concern but made clear the US would respond to attacks.

"We fundamentally don't seek war with Iran," Pompeo said. "But we've also made clear to the Iranians that if American interests are attacked, we will most certainly respond in an appropriate fashion."

Lavrov said Russia is hoping for a positive response from the United States about extending the New START arms control treaty, which is due to expire in 2021, "but we really have some concerns which are related to the re-equipping of launchers of Trident submarines and heavy bombers announced by the United States."

A day after Trump said he would meet with Putin at the Group of 20 summit of leaders in Japan in June, Lavrov said Russia has not received a formal proposal.

"If such a proposal is received, we will respond to it in a positive way," he said.

Putin's foreign affairs adviser Yuri Ushakov said later that the Kremlin is prepared to agree to any format for a Putin-Trump meeting.