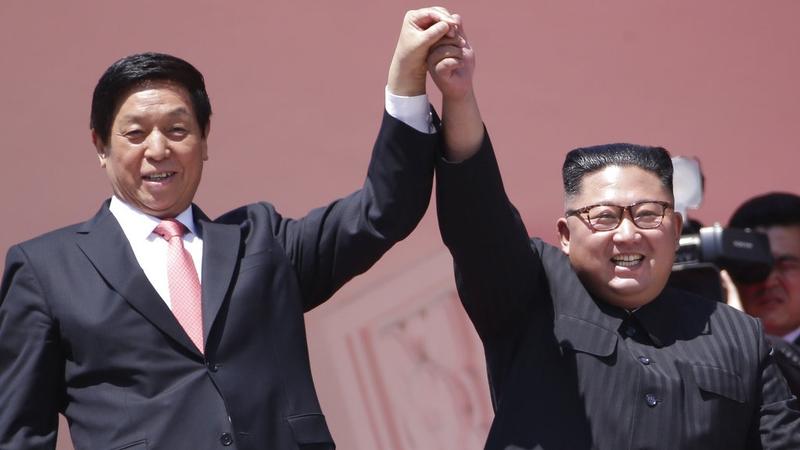 President Xi Jinping sent a congratulatory message to Kim Jong-un, top leader of the Democratic People's Republic of Korea on Sunday, as the country celebrated the 70th anniversary of its founding with a huge military parade.

Xi said that people of the DPRK have made remarkable achievements over the past 70 years in terms of socialist revolution and construction.

In recent years, the Workers' Party of Korea and the DPRK people, led by Kim, have taken a series of positive measures in economic and social development, and achieved important outcomes, bringing the socialist cause in the country into a new historical period, he said, adding that he is pleased with the development.

The traditional China-DPRK friendship, forged and cultivated by older generations of leaders, is a precious treasure shared by both sides, Xi said, and it is the unswerving policy of the CPC and the Chinese government to maintain, consolidate and develop bilateral ties.

Xi said his three meetings with Kim this year further clarified the direction of developing China-DPRK ties, and he is willing to join hands with Kim to promote sound and stable development of ties over the long run, thus benefiting both countries and their people, as well as regional peace and stability.

Xi also wished the DPRK people greater success in national development and construction under the leadership of the Workers' Party of Korea led by Kim.

Li Zhanshu, China's top legislator, paid a visit to the DPRK and attended the celebration events as Xi's special representative.

On Sunday, Li, also a member of the Standing Committee of the Political Bureau of the CPC Central Committee, met with Kim and delivered the letter from Xi.

Li said that China has always adhered to the Korean Peninsula's denuclearization, efforts to maintain peace and stability, and resolve issues through dialogue and negotiations.

China speaks highly of the DPRK's positive efforts in this regard and hopes the DPRK and the United States will implement their consensus and maintain the trend of peaceful dialogue, he added.

Kim said he, the party and the DPRK government, will firmly carry forward the DPRK-China friendship no matter what changes take place in the international situation. The DPRK hopes to learn from the experience of development from China and further expand bilateral exchanges and cooperation in all areas.

The DPRK will stick to the consensus reached during the leaders' meeting with the US in Singapore, and has adopted measures accordingly, Kim said, in reference to his meeting with US President Donald Trump in June.

The DPRK hopes the US will take action accordingly and jointly promote the process of a political solution to the peninsula's nuclear issue, he added.