Like the bride at a lavish ceremony, all eyes are on Chinese wedding spending and its rising share of the global industry 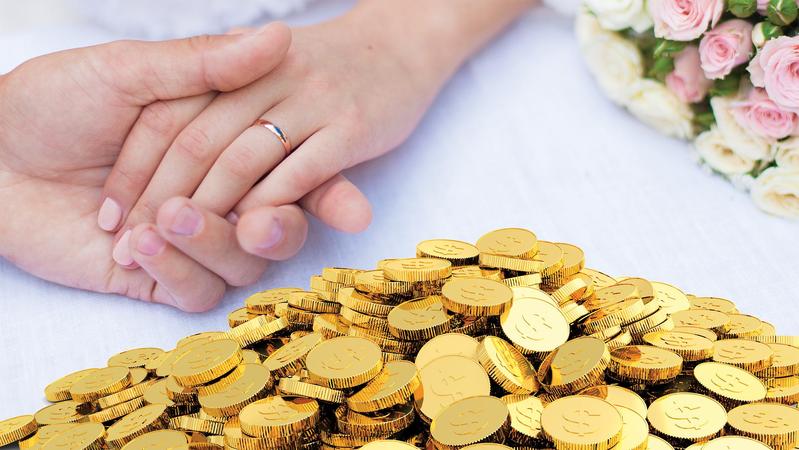 Every year, some 10 million couples tie the knot across China. In the process, they contribute about half of the US$300 billion spent on nuptials around the world — and the Chinese share of the global cake is growing fast.

According to the China Wedding Industry Association, the country’s wedding industry is currently worth around 1 trillion yuan (US$146 billion). Experts say the market could be worth triple this by 2020.

“A wedding is a special day for any couple,” said Philip Tsang, an award-winning wedding photographer based in Hong Kong.

“So it makes sense that many would invest heavily to make sure that the first day of the rest of their lives would be a memorable one for them and everyone else.”

In a country where a culture of conspicuous consumption (at least for weddings) is prevalent due to the need to “save face”, the big day calls for nothing but the best.

This is just one factor driving a visible increase in spending. Higher incomes also combine with changing demographics and an increasing mix of Western and Eastern practices to make weddings a more elaborate affair.

More than three decades of China’s one-child policy means parents put a unique emphasis on this milestone for their offspring. Those who can afford it often go all out for their children, sometimes even making the headlines.

In 2013, Zeng Guo, head of Chongqing-based Fuxing Doors Industry Group, spent an alleged 5 million yuan on the “most expensive wedding in Chongqing’s history” for his son. The wedding convoy consisted of 20 luxury supercars with an estimated worth of 60 million yuan.

There are also reports that Wu Duanbiao, chairman of ceramics firm Fujian Wanli Group, paid more than 1 billion yuan as dowry for his daughter in 2012.

The dowry included four boxes of gold jewelry, a bankbook with deposits worth 20 million yuan, and Wanli stock worth 5 million yuan. The wedding itself was an “eight-day open-air banquet”.

While these are some of the most extravagant Chinese weddings on record, they underscore the reality that people are increasingly willing to spend more.

According to the China Wedding Industry Development Report in 2015, couples in the country currently spend an average of 76,141 yuan per wedding. That is a substantial sum for marital bliss considering the national average annual wage for urban employees is 56,339 yuan, according to China’s National Bureau of Statistics.

“Although China’s middle and upper classes have been growing, and even if the rise in the standard of living stimulates the younger generation’s pursuit of a grand and unique wedding, the income of the newlyweds can barely cover the wedding costs,” said Eda Erbeyli, project manager at Daxue Consulting.

She noted the high average spending on the wedding alone, “without including other related expenditures like the honeymoon”.

“The reason they are able to afford to spend more is that nearly half of the newlyweds get 20 to 60 percent of their wedding funds from their parents.”

As key factors for the increased spending, Erbeyli also cited the “traditional mind-set that a magnificent wedding is the symbol of promise and love, which is still prominent now in 2017” and the trend of “weddings combining Western and Chinese elements”.

A report from Daxue Consulting said the cost of marriage has increased 4,000 times in the last 30 years. It estimated that a couple in the affluent southern city of Guangzhou spends more than 400,000 yuan on a wedding on average, without factoring in new housing.

Research firm IBIS World estimates that half of the couples who get married in China every year opt for some sort of wedding service.

More than 1,000 wedding planning companies are registered in Beijing alone, according to China’s Committee of Wedding Service Industries. And it looks like the industry will keep growing, judging by the training programs that keep popping up. 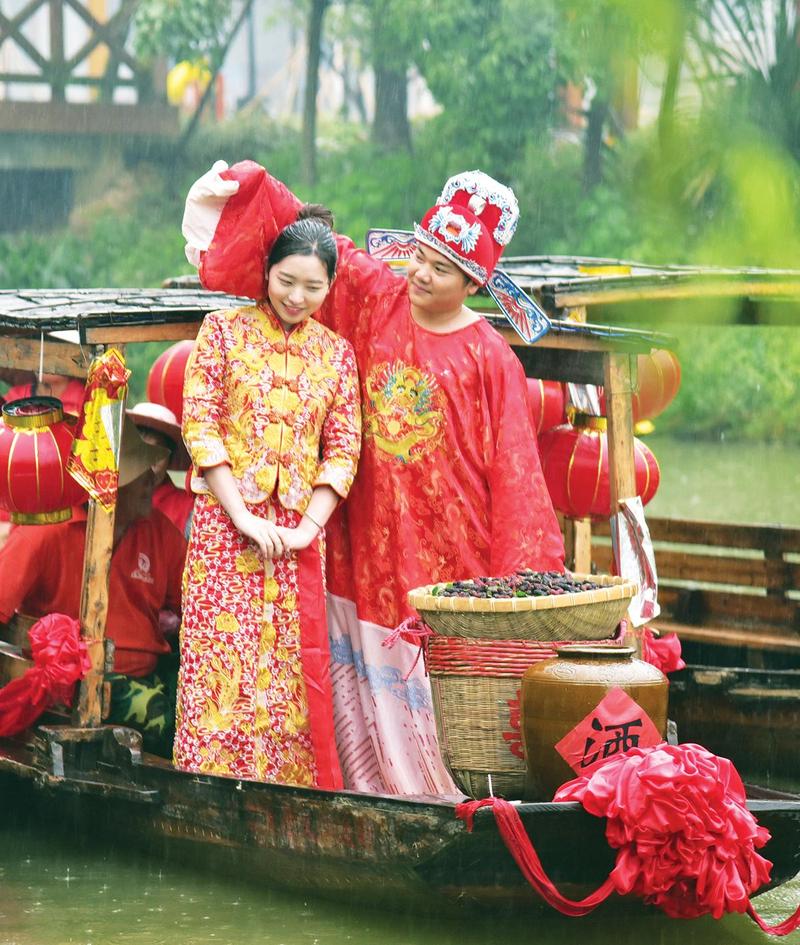 A groom shields his bride from the rain as they head to his home by boat in a traditional Chinese wedding procession in Foshan city, South China’s Guangdong province, on April 24.  (Photo by IMAGINECHINA)

The website of Weddings Beautiful China shows that a 12-day wedding planning course in the trendy Beijing neigborhood of Sanlitun goes for about 21,000 yuan.

Other wedding-related businesses have also grown exponentially, such as dressmakers, jewelers, caterers, florists, and venues for hire.

The Chinese flower industry was valued at more than US$11 billion in 2015, according to China Horticultural Business Services.

When it comes to the wedding dress, custom-made creations can cost as much as 600,000 yuan — for something by Yumi Katsura — depending on the lead time and if diamond and crystal finishings are required. Mass-market rentals can range from 3,000 to 10,000 yuan.

And, although the wedding ring is a Western conceit, jewelry sales in the Chinese mainland hover around the 300 billion yuan mark. Eighty percent of diamond consumption by Chinese consumers is for wedding purposes. Wedding customs in certain parts of China also require gifts of gold for the bride from the groom’s parents.

Another key service for that picture-perfect wedding is the US$30 billion Chinese wedding photography industry.

“Couples know that investing in photography is a good choice because the pictures will last them a lifetime and be passed on to the next generation. So they are willing to splurge on a reliable photographer who can produce quality pictures,” he said.

“The rise of technology and social media have also made quality and creative photography a worthwhile investment. Young Chinese couples want to have pictures that will look good on their WeChat and Weibo,” he added.

Photography trends range from posing in Mao-era uniforms and traditional costumes to using well-known landmarks and exotic locales as backdrops.

Tsang explained that wedding photography package rates within the industry can vary wildly.

“From what I’ve seen, it can cost anywhere from 10,000 to 100,000 yuan. It depends on the experience of the photographer and what is included in the package, such as makeup, props, studio rental, prints and so on,” he said.

Chinese couples commonly pay for a studio session as well as event photography on the wedding day. Tsang provides both, and usually spends an entire day shooting a single wedding.

“A typical Chinese wedding will take a whole day. It starts with a traditional tea ceremony in the morning at either the groom or bride’s place, as a way to show gratitude to the parents of both sides.

“In the afternoon, there is the tradition of the groom having to fetch the bride. The groom and his team of groomsmen would be put through a series of tasks from the bride’s side before he can symbolically win her over.”

This is followed by the wedding ceremony, Tsang said, with a banquet in the evening.

“This is where a lot of Western elements might come through in the process of union, from the decorations to the outfits.”

“I’ve noticed that more people are returning to old-fashioned wedding rituals, particularly from the Han style traditions. People are rediscovering them and bringing them back,” she said.

“For example, before the wedding, the groom must pick up the bride from her residence. This custom represents the daughter leaving her family’s home for her new home with her husband.”

The Chinese wedding package industry has also produced some unique add-ons, such as professional bridesmaids. Depending on the services required, one of these bridesmaids can earn up to 800 yuan per wedding. Her duties might include socialising, acting as a makeup artist, consuming alcohol in place of the bride, appearing in photos, and fending off rowdy wedding guests.

Those making a living from weddings seem confident that people will keep using their services, and that Chinese couples in particular will ensure wedding bells continue ringing louder than ever.

“The industry will continue to grow,” Tsang said. “Even if less people get married, the spending capability of those that do will increase.”