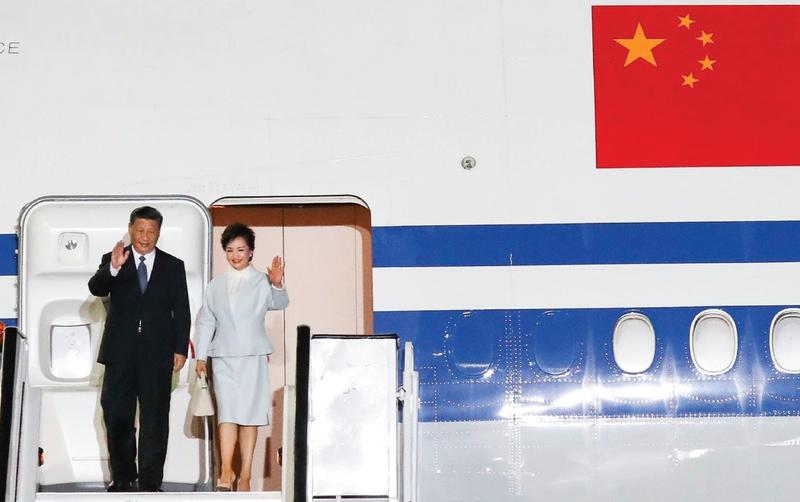 President Xi Jinping called on China and Greece to tap their civilizations for wisdom and build a new type of international relations featuring respect, justice and mutually beneficial cooperation.

He made the remark in a signed article published on Sunday in the Greek newspaper Kathimerini (The Daily) as he kicked off a three-day state visit to the European country.

Xi will travel to Brazil on Tuesday at the invitation of President Jair Bolsonaro and will attend the 11th BRICS Summit on Wednesday and Thursday.

In Greece, Xi is scheduled to have talks with Greek President Prokopis Pavlopoulos and Prime Minister Kyriakos Mitsotakis. The leaders are also expected to make cultural exchanges and advocate dialogue between civilizations. 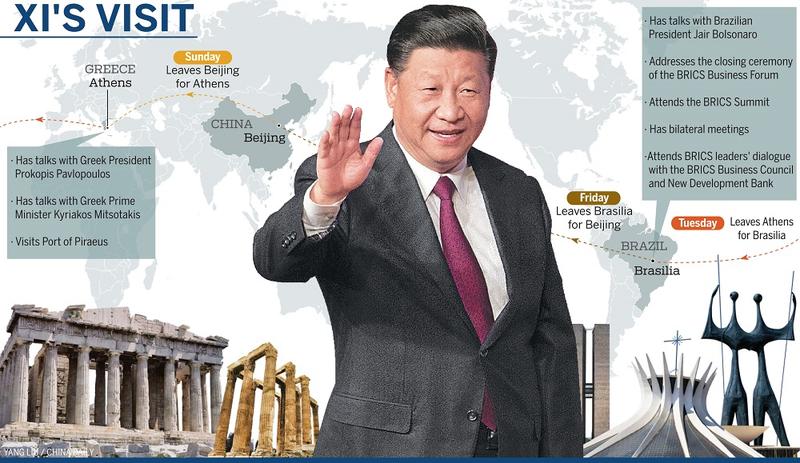 Recalling a stopover on the Aegean island of Rhodes in 2014 that deeply impressed him, Xi wrote: "It is with great respect for civilizations and high expectations for a bright future that I will once again visit this beautiful country, something I very much look forward to."

Great civilizations always stand by each other, Xi said, citing the examples of Greek shipowners who broke through an international blockade to send much-needed supplies and equipment to the People's Republic of China after its founding, and China providing assistance to help Greek friends emerge from economic woes a decade ago.

"The growth of China-Greece relations is testimony that ancient civilizations are capable of dynamic, mutually beneficial cooperation in modern times," he wrote, adding that "I hope to work with your leaders to map out a brighter future for our relations" during the visit.

The growth of China-Greece relations is testimony that ancient civilizations are capable of dynamic, mutually beneficial cooperation in modern times.

The president called for joint efforts to raise the strategic level of Chinese-Greek relations in all respects by maintaining the strong momentum of engagement, continually enhancing mutual understanding and trust and rendering further support for each other's core interests and major concerns.

He called on the two sides to improve all areas of practical cooperation through concrete efforts, broadening areas of cooperation and scaling up investment ties, with the Port of Piraeus serving as a flagship project.

"China is ready to import more quality agricultural products from Greece to provide our consumers with more choices. We hope Greece will open its market wider to Chinese companies and products," he wrote.

Xi also underlined the need to step up cooperation in the Belt and Road Initiative with down-to-earth efforts. Greece was accepted as a member of the China-Central and Eastern European Countries cooperation mechanism in April.

"We need to ... make the most of the location and shipping capacity of Greece, seize the opportunities brought by Greece's joining the China-CEEC cooperation, actively advance practical projects under the China-Europe Land-Sea Express Line and contribute to the China-EU Connectivity Platform," Xi wrote. "This will make us front-runners in China-Europe cooperation."

Panos Laskaridis, president of the Aikaterini Laskaridis Foundation, which promotes Greek culture, said, "Here in Greece, everybody is very excited about the visit, and we expect a lot of results."

Mitsotakis led a delegation to the second China International Import Expo. Xi met with him, and the two visited the Greek pavilion.

"Of course, now we are delighted that your president is coming to Greece for an official visit," Laskaridis told China Daily. "We think all these visits will give a new and strong impetus to the relations between Greece and China."

Chen Weihua in Brussels contributed to this story.