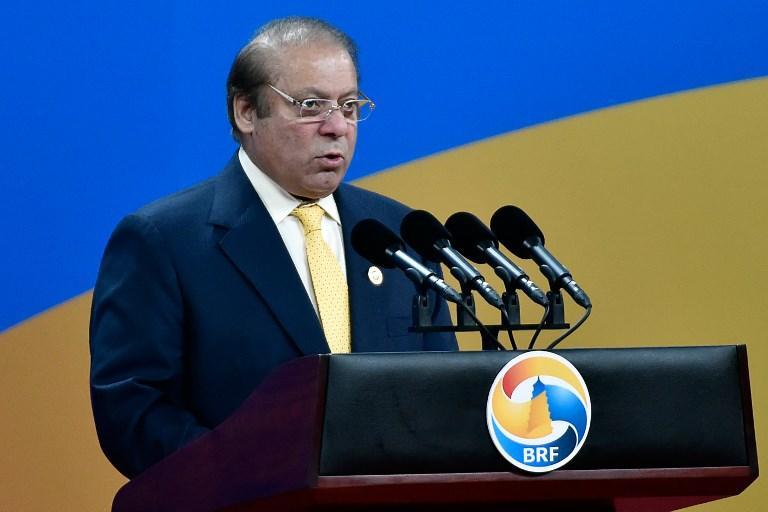 Pakistan's Prime Minister Nawaz Sharif delivers a speech at the Belt and Road Forum in Beijing on May 14, 2017. (KENZABURO FUKUHARA / POOL / AFP)

ISLAMABAD – A Pakistani anti-corruption court on Thursday indicted ousted Prime Minister Nawaz Sharif and his daughter over allegations linked to ownership of London properties, opening a trial that could see the former leader jailed.

Sharif resigned in July after the Supreme Court disqualified him from holding office over an undeclared source of income, but he maintains his grip on the ruling party

The Sharifs have called the corruption proceedings against them a conspiracy, hinting at intervention by the powerful military, but opponents have hailed it as a rare example of the rich and powerful being held accountable.

Sharif, 67, resigned in July after the Supreme Court disqualified him from holding office over an undeclared source of income, but the veteran leader maintains his grip on the ruling Pakistan Muslim League-Nawaz (PML-N) party.

A Reuters witness in court said Sharif, his daughter Maryam, as well as her husband Muhammad Safdar, had all been indicted by the court of the anti-corruption agency, the National Accountability Bureau (NAB).

They all pleaded not guilty. Maryam and Safdar were present in court, but Sharif, who was prime minister twice in the 1990s, sent a representative while he tends to his ailing wife in Britain as she undergoes cancer treatment.

Outside the court, Maryam again hinted at military interference in the judicial process by saying the trial was "a repeat of 1999", the year her father was toppled in a military coup led by former army chief Pervez Musharraf.

"These courts aren’t new for me. It has happened in 1999," Maryam added, without elaborating.

It is not clear if she was comparing the trial to the 1999coup, or subsequent corruption accusations and investigations that Musharraf ordered into Sharif.

Sharif's disqualification stemmed from the Panama Papers leaks in 2016 that appeared to show that his daughter and two sons owned offshore holding companies registered in the British Virgin Islands and used them to buy posh flats in London.

The Supreme Court initially declined to dismiss Sharif but ordered an investigation into his family's wealth.

A separate Supreme Court-appointed panel said the family's wealth did not match its income, and accused Maryam and her brothers of signing forged documents to obscure ownership of offshore companies used to buy the London flats.

After the probe, the top court disqualified Sharif and ordered the NAB to investigate and conduct a trial. Sharif denies ever receiving the small source of income that led to his disqualification.

The NAB has in the past been described as toothless because of its low conviction rates, especially when it comes to powerful politicians, and investigations that last many years.

But the Supreme Court has ordered the trial to be concluded within six months.

Opening arguments are due to begin on Oct 26.