All Essex lorry victims confirmed to be Vietnamese nationals 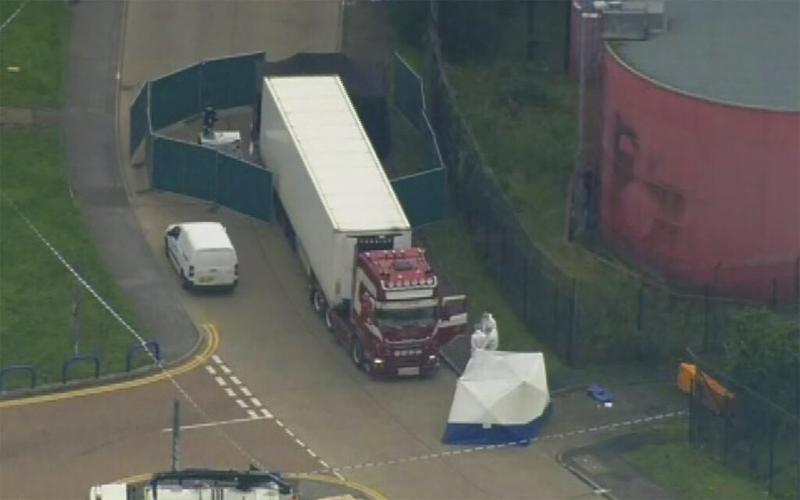 In this Oct 23, 2019 photo, police forensic officers attend the scene after a truck was found to contain a large number of dead bodies in Thurrock, South England. (PHOTO / UK POOL VIA AP, FILE)

HANOI/LONDON — All 39 people found dead in the Essex lorry incident were confirmed to be Vietnamese nationals, Vietnam's Ministry of Public Security announced on Thursday evening.

The 39 victims were from six Vietnamese localities of Hai Phong, Hai Duong, Nghe An, Ha Tinh, Quang Binh, and Thua Thien Hue, the ministry said on its website

The 39 victims were from six Vietnamese localities of Hai Phong, Hai Duong, Nghe An, Ha Tinh, Quang Binh, and Thua Thien Hue, the ministry said on its website.

Sending his condolences to the victims' families, Vietnamese Prime Minister Nguyen Xuan Phuc called on Vietnamese authorities and people nationwide to support them to overcome the great loss.

The prime minister has directed the Ministry of Foreign Affairs, the Ministry of Public Security, and other authorities to work closely with the British side to urgently handle relevant issues, including identifying information and names of the victims and taking necessary protective measures so as to soon repatriate their bodies back home, said the statement published on the government's portal on Thursday evening.

According to a statement from Essex police, they have been working with Vietnamese police officers to verify the identities of the 39 people discovered at Grays in Essex on Oct 23.

"A series of files have been brought before an Identification Commission, and HM Senior Coroner Mrs Caroline Beasley-Murray has now formally identified all of the victims, and the families of those victims have been notified," said the statement.

The senior officer in charge of the enquiry, Assistant Chief Constable Tim Smith, said: "This is an important step in the investigation and enables us to work with our Vietnamese Police colleagues to support the families of those victims."

"It is only right that we provide an opportunity for family members to take in the news confirming the death of their loved ones before releasing any further information. Our thoughts remain with the families and friends of those whose tragic journey ended on our shores."

The Vietnamese government strongly condemns acts of trafficking and calls on countries in the region and the world to step up cooperation, and resolutely prevent and combat this particularly dangerous crime so as not to repeat the same tragedies, and complete investigations soon and bring the criminals to justice.

The Vietnamese government highly appreciates the cooperation of British authorities regarding the case, Phuc said, expressing sincere thanks to the British people, overseas Vietnamese in Britain and other countries for caring, sharing, and showing their sympathy for the victims in this incident.