Editor's note: After his meeting with Kim Jong-un, leader of the Democratic People's Republic of Korean in Pyongyang on Oct 8, US Secretary of State Mike Pompeo claimed the two countries can make "real progress" on denuclearization at a second summit. Two experts shared their views with China Daily's Pan Yixuan on how to achieve further development. Excerpts follow: 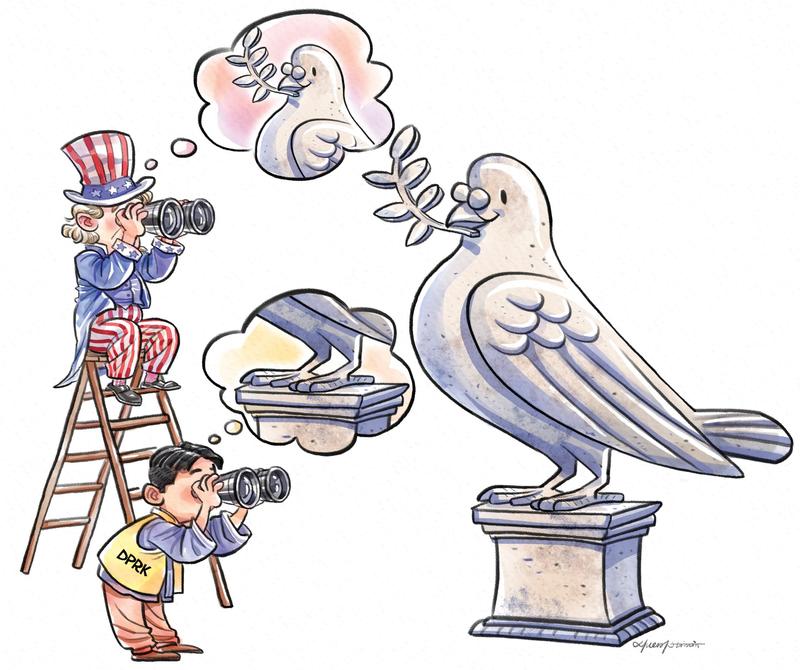 US and DPRK have to narrow gap in expectations

Meeting Kim, confirming the DPRK's willingness to continue denuclearizing, and reaching some agreements on Kim's next meeting with US President Donald Trump, Pompeo's trip was another step forward for the two countries.

However, there were no breakthroughs announced on the denuclearization stalemate. Pyongyang did not make a declaration as urged by Washington and Washington did not promise the reciprocity required by Pyongyang. Though the convocation of another summit between the US and DPRK leaders appears to be in the cards, they may still quite differ in their agendas.

When Pompeo visited the Republic of Korea before he met Kim, the ROK put up a proposal that the US could sign a declaration to end the Korean War, which would be easier to reach in a short term, in exchange for the US inspecting the DPRK's dismantling of its nuclear weapons sites. But the US prefers a peace treaty which will take more time.

There is little doubt that Washington and Pyongyang want peace talks because Pyongyang needs the international sanctions removed to develop its economy, and Washington wants a remarkable achievement before the midterm election in November.

Pompeo acknowledged China's contributions to Peninsula denuclearization and China's potential role in a peace treaty, which may be an intention to increase pressure on the DPRK to take bolder steps in denuclearization. But when Pompeo visited East Asia, vice-foreign minister of the DPRK Choe Son-hui held trilateral talks with Russia and China in Moscow on Oct 9, which could be the DPRK's attempt to gain more support for its expectations of the denuclearization negotiations.

There will be no substantial development at a second US-DPRK summit, if one takes place, unless the US and the DPRK narrow their differences. In the current period, Washington's views on the ROK's end-of-war proposal is important.

Wang Sheng, a researcher at the Co-Innovation Center for Korean Peninsula Studies and professor of International Politics at Jilin University

US must adopt more flexible approach

The DPRK dismantling its nuclear test sites and missile facilities is only freezing its nuclear program. For complete denuclearization, the DPRK will have to accept inspections of the dismantling process and declare all the details of its nuclear weapons. Therefore it is hard to expect the US to act in line with Pyongyang's series of "denuclearizing efforts".

However, the US should change its tough stance and ease the pressure on the DPRK. Pyongyang will not do more substantial denuclearization without reciprocation. In fact, the stalemate between Washington and Pyongyang has not changed much. The international community should listen to the DPRK about its concerns to make a real breakthrough.

It is difficult for the United Nations to lift sanctions and for the US to reduce its military threat. But action-for-action reciprocity should be brokered by other countries, such as a promise of not worsening sanctions in the current phase, easing sanctions if Pyongyang make tangible progress toward denuclearization, a schedule of economic aid and cooperation in line with further advancements. It is time to draft plans to support the DPRK's economic recovery and opening-up as economic development should be the DPRK's priority.

For example, if the US, China, the ROK, Russia, and Japan, which have interests in Northeast Asia, all want to take a lead in the denuclearization process, the process cannot move steadily unless they move in the same direction. There needs to be joint economic support for a denuclearized Pyongyang.

Jin Qiangyi, a researcher at the Center for North and South Korea Studies of Yanbian University