CE: HK's strategic position a boon for Belt and Road

By Duan Ting in Hong Kong

Chief Executive Carrie Lam Cheng Yuet-ngor has reiterated the contributions that Hong Kong can make under the Belt and Road Initiative as a predominant service economy, as well as the major benefits that can be derived from the massive project.

At a meeting with Steve Forbes, chairman and editor-in-chief of Forbes Media, during the Forbes Global CEO Conference in Hong Kong on Wednesday, Lam stressed there are several areas of connectivity for the SAR under the B&R Initiative, including the city’s strategic location as an aviation hub, its quality of professional services, and cultural connectivity.

For countries in the B&R regions that need to raise funds to support their national development, Lam said Hong Kong, as an international fundraising center, is the place to turn to.

She cited the Guangdong-Hong Kong-Macao Greater Bay Area as one of China’s fastest-growing regions with a population of about 626 million, saying Hong Kong will try to remove as much of the remaining trade barriers as possible to provide free flow of capital, traffic, cargo, information and data, to help the Greater Bay Area economy compete globally.

Hong Kong, she said, has advantages in research and development, intellectual property protection, but it doesn’t have manufacturing capacity. So, maybe together with Shenzhen and Dongguan, it would make a better combination to stay ahead in the Greater Bay Area. 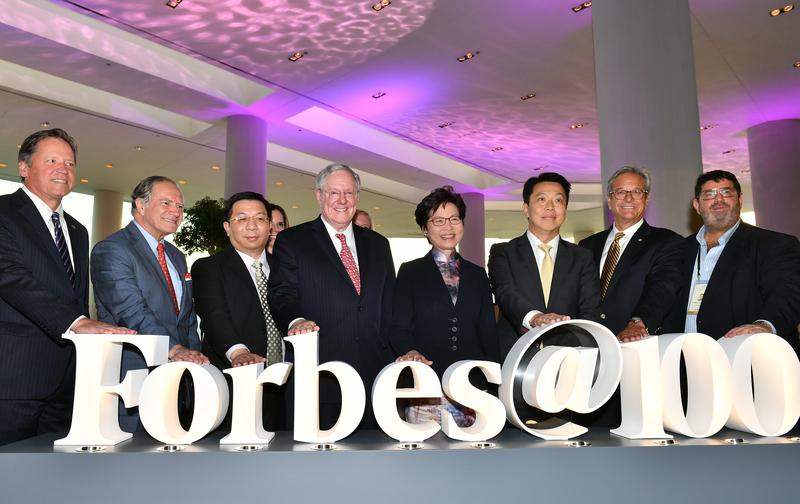 To develop an innovation and technology hub is one of the highlights of the Greater Bay Area economy, hopefully, very much like or even bigger and better than the Silicon Valley, according to Lam.

In terms of economic strategy, for a place like Hong Kong which is a small economy without natural growth industries, Lam said: “We need to have the strong support of free trade and nurture an external economy, including investing overseas and on the Chinese mainland, to provide more opportunities for local businesses and for young people.”

She said a liberal trade and investment strategy, instead of closed doors, and preserving jobs for local people will benefit Hong Kong and help sustain the local economy.

The best way to predict the future is to create it and I hope that during my five-year term, I can create a much better future for Hong Kong

On the pegged exchange rate and monetary stability, the Chief Executive said monetary stability was a key part of her election manifesto, as shown by her invitation to Joseph Yam Chi-kwong – the first chief executive officer of the Hong Kong Monetary Authority -- to join her team as a senior adviser in order to give the people a certain level of confidence in the new government in dealing with financial and monetary issues.

ALSO READ: HK a 'services platform' under Belt and Road

She noted that Hong Kong has a very robust banking system built from acquiring past experiences following several financial crises.

Lam told Forbes that, in the past two decades, Hong Kong has successfully implemented “one country, two systems”, and enjoys a high degree of autonomy as promised under the Basic Law, and there is no basis to worry about her role under the system.

Regarding a question raised by Forbes on whether Hong Kong would become just like another mainland city, Lam said the special administrative region does not want to be just one of the 600 plus cities in China, but to maintain its unique strengths and advantages, and neither does the central government.

“The best way to predict the future is to create it and I hope that during my five-year term, I can create a much better future for Hong Kong,” Lam said.

She added that her government also intends to lessen the tax burden on startups and small and medium-sized enterprises with a lower than 10-percent tax.