World Economic Forum founder Klaus Schwab, a winner of the China Reform Friendship Medal, made tremendous efforts to work with the country after the launch of opening-up 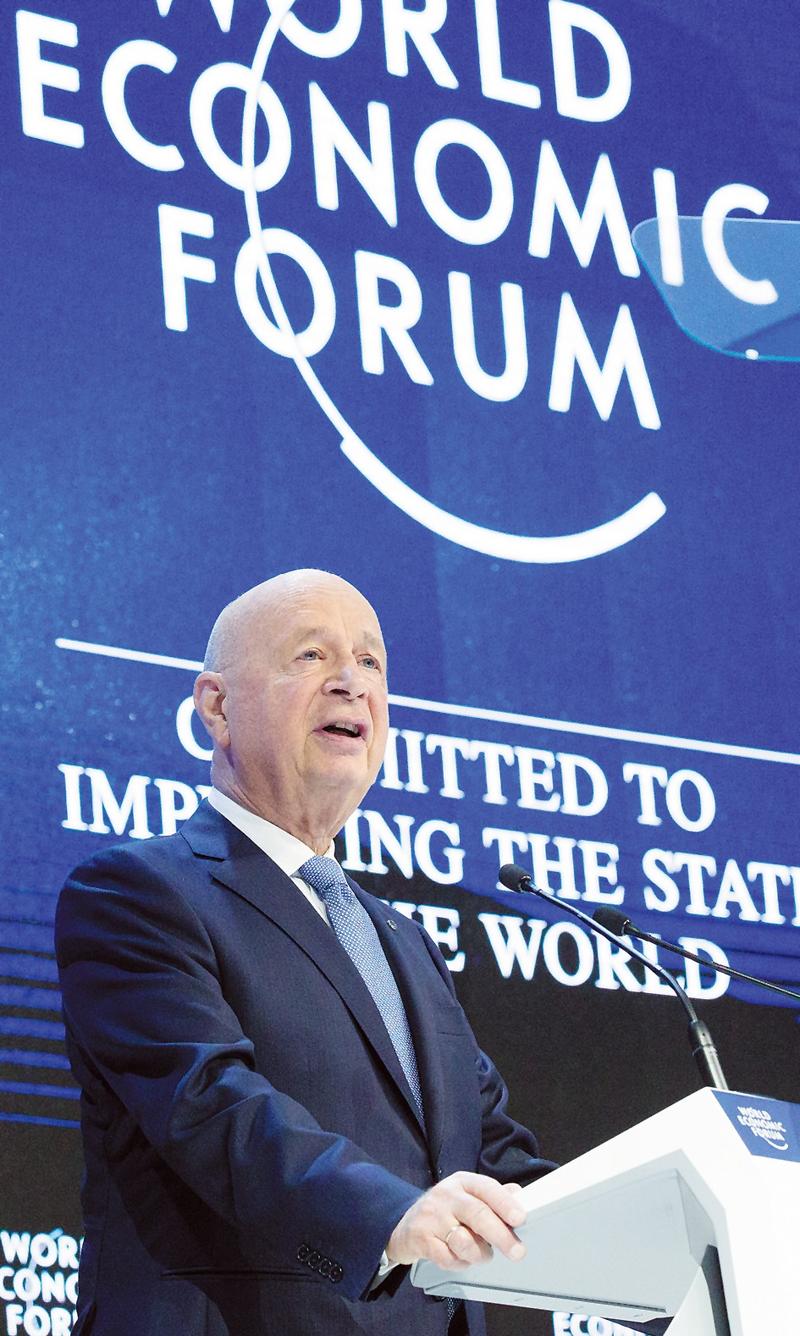 The World Economic Forum has been a key backer of China's efforts to re-engineer the global economic order to make it more open and multilateral, and able to better address concerns arising from resistance to globalization.

As its founder and executive chairman, Klaus Schwab has embraced China's firm belief that economic globalization has the potential to deliver wealth and welfare to people around the world.

The forum, he said, will continue to strengthen nations such as China that are striving to realize the shared dream of world peace, happiness, justice, equality and love triumphing over poverty.

I’m sure that, particularly with the support of the fourth industrial revolution, China will continue its growth of a more qualitative nature, fortunately not just quantitative growth

Schwab, who was one of 10 foreign experts presented with a China Reform Friendship Medal at a gathering in Beijing to celebrate the 40th anniversary of reform and opening-up on Tuesday, said such aspirations have shaped his efforts over the past five decades.

During that time, he has organized discussion forums that connected leading government figures, business stalwarts and policymakers, so they could consider major global issues of the day and brainstorm on solutions to global challenges.

Born in Ravensburg, Germany, in 1938, Schwab grew up in the tumultuous postwar reconstruction period. His father was managing director of a Swiss machinery company and led several industry associations, while Schwab became heavily involved in efforts to promote reconciliation between young people in Germany and France.

He moved to Zurich in 1957 to study mechanical engineering at the Swiss Federal Institute of Technology. Between 1962 and 1967, he obtained a master's degree in public administration and doctorates in engineering and economics.

In January 1971, he organized the first European Management Symposium, the precursor of the World Economic Forum, in Davos, a picturesque town in Switzerland surrounded by Alpine peaks.

With close to 50 years of managing the forum, Schwab lives up to his reputation as a spokesman for the "Davos Spirit". For him, the spirit is "the concept of multistakeholder participation, collaboration and congenial exchange".

There was great interest worldwide in reform and opening-up when it was announced by China's paramount leader Deng Xiaoping in the fall of 1978. As a result, Schwab invited Deng to address the Davos symposium in 1979.

Though Deng did not attend that year, Beijing sent a delegation of eminent economists led by professor Qian Junrui, director of the Chinese Academy of Social Sciences' Institute for Global Economic Research. China's presence aroused the interest of participants at the meeting, which was chaired by Edward Heath, the British prime minister.

Though there were discussions about structural crisis and stagflation during the 1979 World Economic Forum, Schwab highlighted that a platform for furthering peace and reconciliation in many parts of the world, promoting understanding between the East and West, and introducing emerging economies such as China to the international community, was much needed.

At that time, Deng initiated a program known as the Four Modernizations to reform Chinese industry, agriculture, national defense, and science and technology.

In addition to removing many orthodox doctrines, the leader also wanted to implement a pragmatic socialist market system "with Chinese characteristics".

Schwab paid his first visit to China in April 1979, marking the start of a long relationship between the World Economic Forum and China. This includes official Chinese participation in Davos almost every year since.

The forum held its first meeting in China in 1981, having sent delegations to the country in 1979 and 1980, and receiving several Chinese delegations in Switzerland and other parts of Europe. At the symposium in 1981, senior Chinese officials outlined the country's plans for economic development over the next decade.

"The WEF has been associated with China since the beginning of the reform and opening-up policy," Schwab said in September. "(This year) we are celebrating 40 years of cooperation. I have witnessed the great changes of China as it has become the world's No 2 economic power."

He praised China for its achievements in the past 40 years: "I'm sure that, particularly with the support of the fourth industrial revolution, China will continue its growth of a more qualitative nature, fortunately not just quantitative growth."

His confidence stems from the fact that China has achieved a certain level of development, and the key for growth. 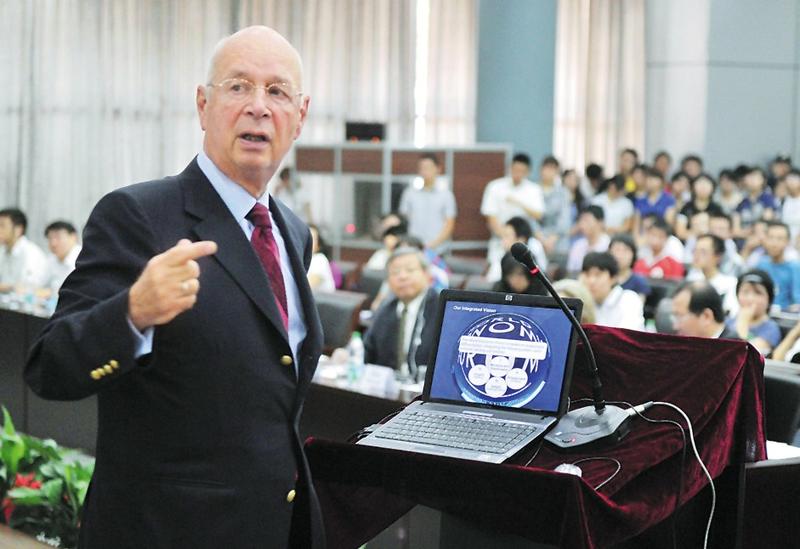 Schwab delivers a speech at Nankai University in Tianjin on Sept 11 2010. (PHOTO / XINHUA)

The future is here

During the past four decades, the World Economic Forum's scope and focus have expanded.

However, in Schwab's view, what has never changed is "its dedication to collaboration among stakeholders, the steadfast adherence to high-level participation of leaders sharing the forum's commitment to improving the state of the world, and the forum's trust in the power of dialogue and exchange based on mutual respect and civility to bridge divides and shape actionable solutions to global challenges".

In September, at the opening ceremony of the annual meeting of the forum's New Champions event in Tianjin, Premier Li Keqiang vowed that the Chinese economy will open further and will help with the advance of economic globalization.

"This year marks the 40th anniversary of reform and opening-up," he said. "Compared with where we came from, the breadth and depth of opening-up has gone far beyond our expectations, and those of our foreign friends. Since we have benefited from opening-up, we will only open wider to the world."

Since becoming international, the World Economic Forum took the initiative to serve a broad scale of stakeholders, and act as their trustee charged with achieving long-term sustained growth. It has consolidated its support to an integrated global economy, open markets and multilateralism, which is in line with reform and opening-up.

During this year's Summer Davos in Tianjin, Schwab expressed his concerns in a speech at Nankai University about the global community's current perceptions. He observed that fewer people see globalization as a means for advancing global collective interests, as the scale of the integrated global economy now contrasts sharply with the fissures in global society.

"Governments increasingly protect and prioritize the interests of their societies over maintaining a free market global order, which is perceived by large parts of the population as more of a threat than an enabler of their livelihoods," Schwab said. "Governments should never forget that open markets and multilateralism are a major driver for creating wealth and welfare."

China will play a leading role in shaping a new framework for global cooperation to maintain open markets and facilitate globalization, he added. The country can take more responsibility in improving the international integration of governments, business and civil society, given that antiglobalization forces and sentiments are rising and disrupting the world's development.

The country could also lead the global transformation toward new development models, characterized by technological innovation and more based on intangible and digital assets.

The World Economic Forum opened its China representative office in Beijing in June 2006. Since then, it has been determined to bring in fresh thinking and the dynamism of leaders from fast-growing and innovative companies, the so-called new champions.

The inaugural meeting of the annual New Champions event was held in Dalian, Liaoning province, in 2007.

It brought together the forum's new community of fast-growing businesses, along with technological pioneers and young global leaders. More than 1,700 business, government and NGO leaders representing 90 nations participated and shared ideas. It was a meeting of minds, and a mingling of the old and new economies.

"Schwab has sincere, genuine feelings for China, and many times he has expressed his feeling of great honor when participating in China's reform and opening-up process," said Zhu Min, head of Tsinghua University's National Institute of Financial Research and a former member of the World Economic Forum's board of directors.

"He is a thinker, as well as a practitioner, who puts the Davos Spirit into effect in the real world. The forum also proactively facilitates the popularization and promotion of technological innovation."

In January last year, President Xi Jinping, the first Chinese head of state to attend the World Economic Forum's annual meeting, made a speech in Davos. He called for joint efforts to chart the course of economic globalization and forge new models of global growth, cooperation, governance and development.

The president also called on the international community to face up to the problems caused by globalization instead of dodging them.

"Whether you like it or not, the global economy is the big ocean that you cannot escape from," Xi said. "Any attempt to cut off the flow of capital, technologies, products, industries and people between economies, and channel the waters in the ocean back into isolated lakes and creeks, is simply not possible."

"What most impressed participants and the media was the president's commitment to an open and collaborative spirit when addressing shared challenges," Schwab said.

"Globalization has benefited the world tremendously, although the context (of economic development and exchange) has changed. Today, global trade is not only the exchange of physical goods, we also have e-commerce. We have the issue of intellectual property and investments, so the economic exchange has become different.

"Now we have to make everything to keep within a multilateral and open system," he added. "Trade wars will certainly lead to a lose-lose, not a win-win, situation. I hope that everyone will realize that maintaining an open multilateral system is in our interest." 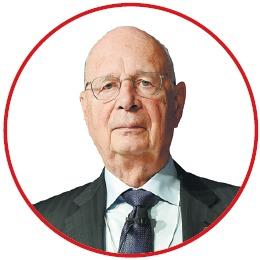 1967: Doctorate in economics, University of Fribourg

1967-70: Member of the management board, Sulzer Escher Wyss AG, Zurich