Belt and Road a factor as investors choose residential property in markets such as Thailand, Malaysia, Cambodia and Singapore 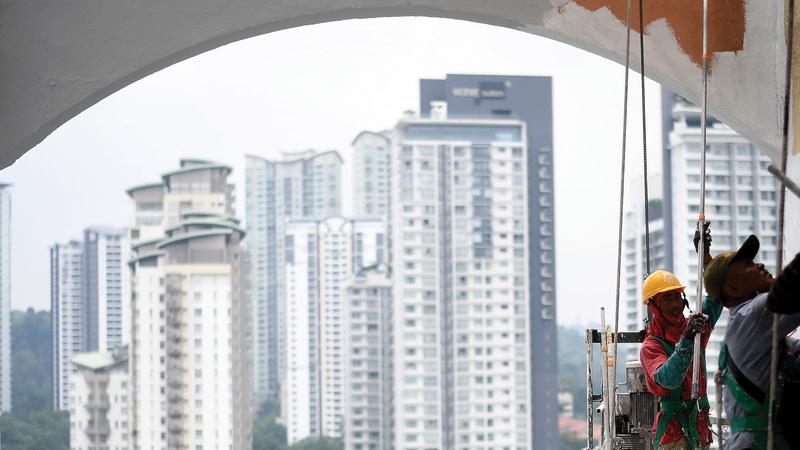 Workers paint an apartment as high-rise buildings are seen in the background in Kuala Lumpur on April 11 last year. (PHOTO / AFP)

While Chinese investors no longer have the same enthusiasm they once did for property in Australia and New Zealand, due to changing foreign investment laws and taxes, the same cannot be said for Southeast Asia.

In Thailand, Malaysia, Cambodia and Singapore, foreign investors are snapping up residential property as demand in some countries outstrips supply. In most cases, Chinese investors are among the dominant players.

Justin Brown, chairman of residential projects with commercial real estate services and investment firm CBRE Pacific, said: “Prior to the introduction of increased property taxes and lending restrictions for foreign investors buying new residential property in Australia, foreign investors (including Chinese buyers) made up approximately 18 percent of our purchasers for off-the-plan new purchases.

“Currently, this level has reduced to approximately 5 percent of purchases,” he told China Daily Asia Weekly.

China’s largest international property portal, Juwai.com, said the “negative influence of capital controls has been at least partially offset by the positive influence” of the Belt and Road Initiative.

With many middle-class Chinese investors finding themselves priced out of an already overheated domestic market, the move to more affordable property investments in Southeast Asia has accelerated.

A report from the National Academy of Economic Strategy at the Chinese Academy of Social Sciences expects China’s property market “to cool” in 2018 as growth in real estate investment, property sales value and home prices begin to slow.

“Malaysia is in a privileged position and is expected to benefit from the growth in regional trade, investment flows, and economic cooperation the Belt and Road Initiative is intended to foster,” Juwai.com said.

As Malaysia is a Belt and Road country, many Chinese believe real estate investment there is less risky than in other countries.

Desmond Sim, head of research with CBRE Singapore and Southeast Asia, said Chinese investment has been key to countries in Southeast Asia on both spectrums.

“The bulk of Chinese investment has gone into energy, transport and real estate,” he said. “Foreign direct investment (FDI) from China is featured prominently in key infrastructure projects in key markets such as Thailand, Malaysia, as well as Vietnam.

“In addition, private investment capital has also flowed into the residential sector — both into development sites as well as into end-products in countries like Singapore, Malaysia, Indonesia and Vietnam.”

He said playing a minor yet strategic role in the Belt and Road vision, Southeast Asia stands to keep gaining from Chinese capital inflows into the region.

While the estimated FDI contribution to Association of Southeast Asian Nations countries is reported to be hovering below 10 percent, Chinese FDI could surpass this mark in the next five years, Sim said.

He also noted that Southeast Asia has some of the world’s fastest growing economies, citing the Philippines and Vietnam.

Sim said it would not surprise him if “Chinese investors take this opportunity and expand their footprint in this region”.

Looking at residential property, as tracked by Juwai.com’s Chinese buyer inquiry data, Chinese buyer interest has been on a rapid upward trend since the fourth quarter of 2015.

Over the past three years, Malaysia and Singapore have virtually reversed positions when it comes to country ranking by level of Chinese buyer demand.

Malaysia in 2015 was only the 15th most popular country for Chinese residential property buyers based on the number of inquiries they made. By 2017, it ranked in the top 10.

During the same period, and also in Asia Pacific, Australia has retained its ranking as the second most popular destination, and Thailand has moved from sixth to third.

Analysts say that while Australia is still popular among Chinese investors, various Australian state and federal government restrictions on foreign investors are making the country less attractive for them.

In Thailand, analysts say Chinese are snapping up more properties for both personal and investment purposes.

Thailand’s attractions include its proximity to China and some of the region’s most attractive holiday destinations, such as Phuket and Pattaya.

In the last five years, Thailand has become a major holiday destination for Chinese travelers. Chinese tourists accounted for a third of the 35 million tourists who visited the kingdom last year, according to Thai government data.

Although 2017 data has not yet been completed, analysts expect the number of Chinese investors will have risen from the previous year.

Sue Jong, chief of operations for Juwai.com, said: “We are starting to see a formerly underrepresented buyer appearing in larger numbers. This is the upper middle-class Chinese buyer who can’t afford property in more expensive countries.”

Two-thirds of Chinese buyers are looking at property that costs US$250,000 or less, Jong added.

According to real estate consultancy Knight Frank, Malaysia was the third favorite destination for Chinese developers from 2012 to 2016.

About 35 percent of residential land transactions were carried out by foreign buyers in the last five years, of which the majority were from the Chinese mainland, according to Knight Frank.

Malaysia attracts Chinese buyers who appreciate its relatively well-developed infrastructure, the opportunity to obtain quality English-language education, and the chance to enjoy a more pleasant lifestyle and environment than in China.

Most importantly, Malaysia is a springboard for second-generation Chinese who go there to study before going to Europe, Australia or the United States.

Nicholas Holt, head of research at Knight Frank Asia Pacific, said the outlook for the regional residential property market this year is “positive but muted”.

“Interest rate rises and a low probability of the lifting of restrictions will likely keep a lid on price growth in many markets,” he said.

“There will, however, be pockets of stronger sentiment across the region: Singapore is set for a stronger 2018, driven by the buoyant collective sales market; Manila continues to see strength in demand for condominiums; while the Indian residential market could start to emerge from its slumber as it absorbs the policy, regulatory and tax changes of the last 16 months.”

According to Singapore’s Urban Redevelopment Authority (URA), purchases by foreigners of residential property in the first half of 2017 increased by 48 percent from the previous corresponding half.

The URA said that buyers from China have consolidated their position as the top buying group in Singapore over the past five years, making up the majority of all foreign property investors in the city-state.

URA statistics showed that the majority of Chinese investors bought properties priced at between S$500,000 (US$380,500) and S$1 million in 2017. This was followed closely by properties ranging between S$1 million and S$1.5 million.

A building boom is under way across the Cambodian capital, Phnom Penh, as new apartment complexes spring up to lure Chinese investors, The New York Times reported on Jan 9.

“For many of the capital’s largest projects, Chinese are now viewed as the target market,” it said.

Ross Wheble, Cambodia country director for Knight Frank, said: “Cambodia has been attracting foreign investment in residential property since the early 2000s but has started to gain significant regional interest since its recovery from the global financial crisis.”

He told China Daily Asia Weekly that a number of key factors are helping Cambodia. Among them is the country’s strong economic expansion, which recorded one of the highest GDP growth rates in Southeast Asia during the past decade.

He said being a “dollarized” economy helps minimize currency risk, while Cambodia’s open door policy on foreign investment and being a key country in China’s Belt and Road Initiative have also added to its investment potential.

“Having no restrictions on the repatriation of capital, the relatively healthy rental yields compared with neighboring countries and improving infrastructure and regional connectivity are also factors,” he said.

No 1 between 2011 and 2016, investing US$5.9 billion according to the Council for the Development of Cambodia, but this has predominantly been in infrastructure and manufacturing.

“It is only over the past 18 to 24 months that we have seen an increase in Chinese developers and private investors entering the market,” Wheble said.