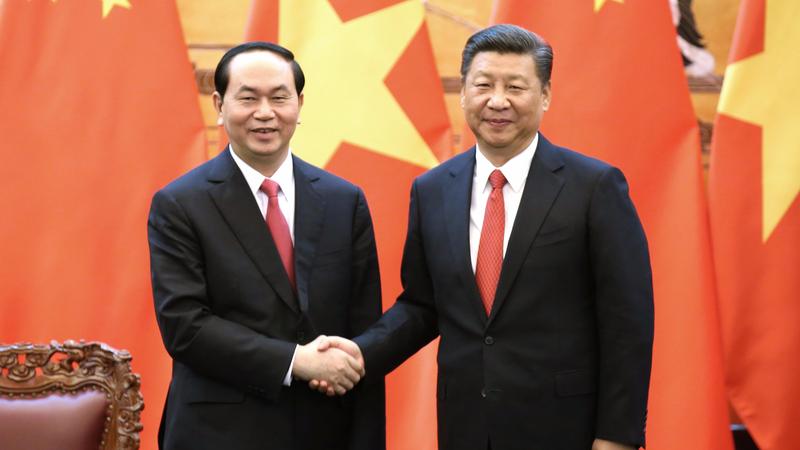 Xi recalled his meeting with Quang last November on the sidelines of the Asia-Pacific Economic Cooperation (APEC) Economic Leaders' Meeting in Lima of Peru, in which they reached important consensus on deepening bilateral all-round strategic cooperation.

Xi invited Nguyen Phu Trong, general secretary of the Communist Party of Vietnam (CPV) Central Committee, to visit China in January this year. Xi and Trong had in-depth exchanges on major issues of common concern, and clarified the direction of future China-Vietnam ties.

Xi said both sides should work closely to implement consensus reached by state leaders, cement cooperation in various areas, and boost their all-round strategic partnership to a new level.

China firmly supports Vietnam's development path suitable to its national conditions, and will stick to a friendly policy towards Vietnam and facilitate sustained and stable growth of bilateral ties, Xi said.

Xi called on to make full use of the China-Vietnam steering committee on cooperation, combine their development strategies, accelerate the building of cross-border economic cooperation zones, and deepen cooperation in such areas as capacity, infrastructure building, investment and trade.

He asked both sides to cement coordination in multilateral frameworks such as the United Nations, APEC, China-ASEAN and the Lancang-Mekong Cooperation Frameworks.

Quang is on a state visit to China from May 11 to 15, and will attend the upcoming Belt and Road Forum for International Cooperation, scheduled for May 14 to 15 in Beijing.

He called on the two countries to take the opportunity of the forum to synergize their strategies and boost substantial cooperation.

Quang, for his part, said it is a set policy and a priority of Vietnam to consolidate friendship with China and boost healthy and stable growth of ties.

This is Quang's first visit to China since he took office in April 2016.

Altogether 29 heads of state and government leaders will attend the upcoming forum. It marks the highest-profile international meeting on the Belt and Road Initiative since it was proposed by China in 2013.