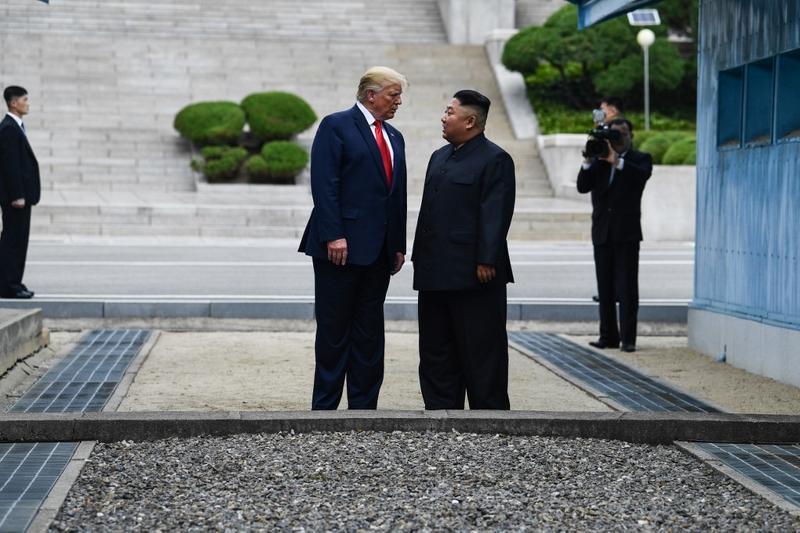 The Democratic People’s Republic of Korea leader Kim Jong-un talks with US President Donald Trump as they stand north of the Military Demarcation Line that divides the two Koreas, in the Joint Security Area (JSA) of Panmunjom in the Demilitarized zone (DMZ), June 30, 2019. (BRENDAN SMIALOWSKI / AFP)

PANMUNJOM, ROK – US President Donald Trump became the first sitting US president to set foot in the Democratic People’s Republic of Korea (DPRK) on Sunday when he met its leader, Kim Jong-un, in the Demilitarised Zone (DMZ) between the two Koreas and agreed to resume stalled nuclear talks.

The two men shook hands warmly and expressed hopes for peace when they met for the third time in just over a year on the old Cold War frontier that for decades has symbolized the hostility between their countries, which are technically still at war.

The meeting was a very good one, very strong ... We agreed to work out details. We'll see what can happen.

Trump, escorted by Kim, briefly crossed a military demarcation line into the DPRK.

Moments later, they returned to the Republic of Korea side and joined ROK President Moon Jae-in for a brief chat, marking an unprecedented three-way gathering.

Trump and Kim then held a closed-door meeting for nearly an hour.

"The meeting was a very good one, very strong ... We agreed to work out details," Trump said. "We'll see what can happen."

He said both sides would set up teams to push forward stalled talks aimed at getting the DPRK to give up its nuclear weapons, adding he was in no rush for a deal.

Trump and Kim met for the first time in Singapore in June last year, and agreed to improve relations and work towards the denuclearization of the Korean Peninsula.

But there has been little progress since then.

A second summit in Hanoi, Vietnam, in February broke down after the two sides failed to narrow differences between a US demand for the DPRK to give up its nuclear weapons and a DPRK demand for sanctions relief.

Kim looked relaxed and smiled as he chatted with Trump amidst a throng of press photographers, aides and bodyguards.

"I was surprised to see your message that you wanted to meet me," he told Trump, referring to Trump's Saturday offer, in a Twitter posting, to meet.

"This is an expression of his willingness" to work towards a new future, Kim said.

Kim said it would be a great honor if Trump visited his capital of Pyongyang.

"To cross that line was a great honor," Trump said, referring to his brief incursion into the DPRK side of the DMZ. 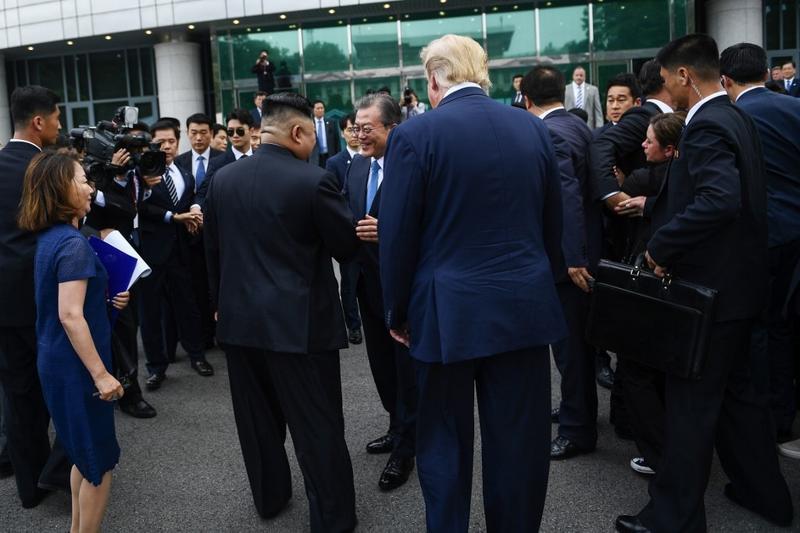 The Democratic People’s Republic of Korea leader Kim Jong-un stands with US President Donald Trump south of the Military Demarcation Line that divides the two Koreas in the Joint Security Area (JSA) of Panmunjom in the Demilitarized zone (DMZ), June 30, 2019. (BRENDAN SMIALOWSKI / AFP)

"We moved mountains" to arrange the meeting at such short notice, he said.

Trump arrived in the ROK late on Saturday for talks with Moon after attending a Group of 20 summit in Osaka, Japan, during which he made the surprise, spur-of-the-moment offer to meet Kim, who accepted it. 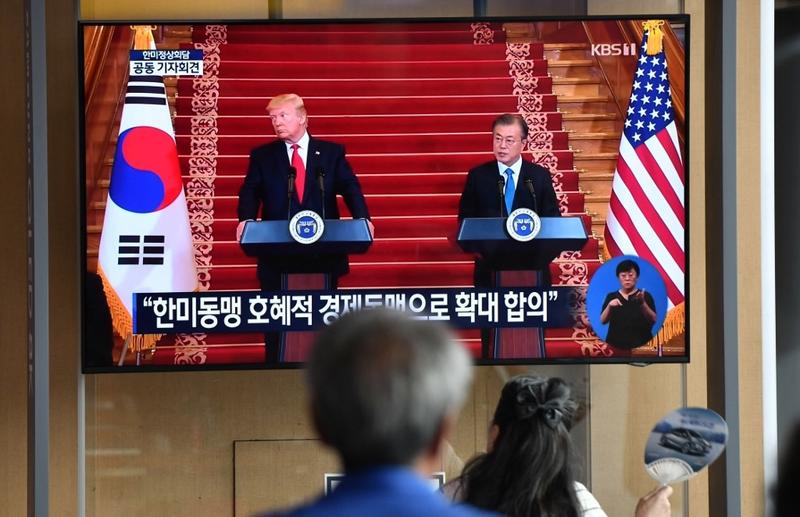 People watch a television news screen showing live footage of a joint press conference between US President Donald Trump and President of the Republic of Korea (ROK) Moon Jae-In, at a railway station in Seoul, June 30, 2019. (JUNG YEON-JE / AFP)

Trump and Kim met in the so-called Joint Security Area (JSA), which is patrolled by soldiers from both Koreas. Moon joined the two after their initial handshakes.

Trump said he had "plenty of time" and was in "no rush" to reach a deal.

The DMZ was set up after the 1950-53 Korean War ended in an armistice, not a truce, leaving the DPRK and a US-led UN forces still technically at war.