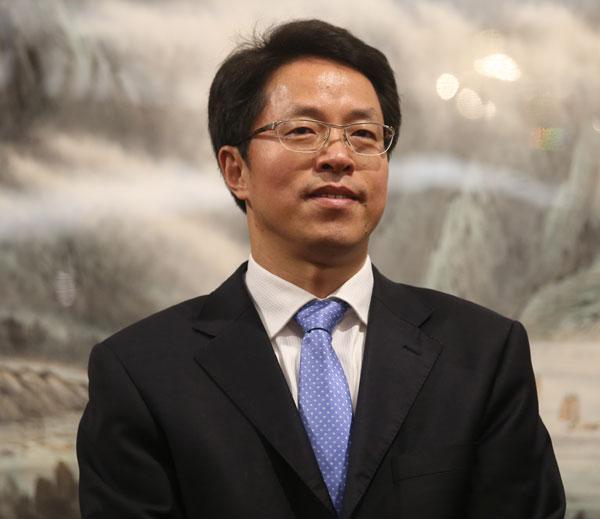 Zhang Xiaoming was appointed as the Director of the Hong Kong and Macao Affairs Office (HKMAO) of the State Council on Sept 22, 2017. (EDMOND TANG / CHINA DAILY)

The State Council, China’s Cabinet, appointed on Friday Zhang Xiaoming as director of the Hong Kong and Macao Affairs Office.

Zhang, 54, succeeds Wang Guangya. Zhang had been director of the liaison office of the Central People’s Government in the Hong Kong Special Administrative Re­gion and will be replaced by Wang Zhimin.

Leaving Hong Kong at the airport on Friday morning, Zhang urged residents of Hong Kong from all sectors to believe in themselves, in Hong Kong and in the country, reiterating President Xi Jinping’s remarks during the 20th-anniversary celebration of Hong Kong’s return to the motherland in July.

Hong Kong people, the city and the country are clearly closely linked. It guarantees Hong Kong’s future prosperity and stability, and ensures Hong Kong people’s aspiration for better lives will be fulfilled, Zhang said, adding that he always believed Hong Kong is a blessed place.

In parting Hong Kong, Zhang quoted three sentences to express his feelings for Hong Kong after his position there during the past five years.

... I did bring away a lot of sincere love from a lot of Hong Kong friends

He quoted a verse from well-known poet Su Shi from the Song Dynasty (960-1279) to sum up his five-year term. The verse was meant to say that looking back with all the ups and downs along the way, the rainy or sunny days in the past shall not matter anymore.

He then quoted early 20th-century Chinese poet Xu Zhimo’s renowned verse of Saying Goodbye to Cambridge Again, saying “gently I flick my sleeves, not even a wisp of cloud will I bring away.”

“But I did bring away a lot of sincere love from a lot of Hong Kong friends,” said Zhang.

Zhang also quoted the lyric of famous female singer Faye Wang’s song Legend, saying he will always be around for Hong Kong, never far away.

Zhang also thanked Hong Kong residents and media for their support, care and help to the liaison office and him.

In Beijing, Wang Guangya, who stepped down as head of the Hong Kong and Macao Affairs Office, said he be­lieved that Zhang is capable and competent for the new post.

Zhang joined the Hong Kong and Macao Affairs Office in 1980s as a junior official.

He was promoted to deputy director in 2004 and was appointed director of the liaison office of Hong Kong in 2012.

Zheng Xiaosong, 58, will take over as the director of the Liaison Office of Central People’s Government in Macao.