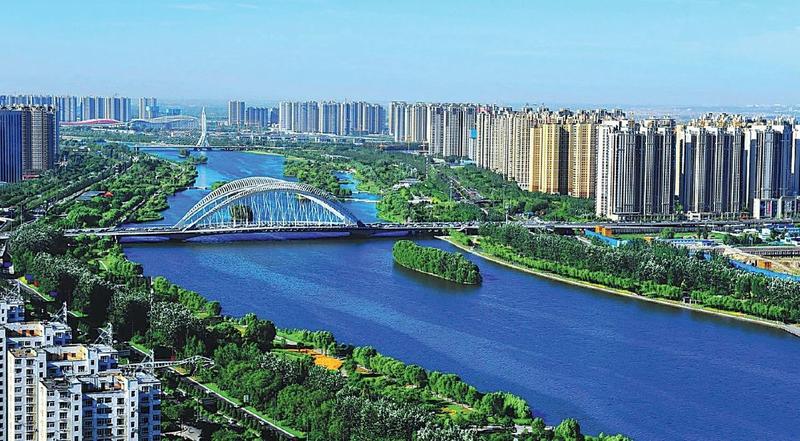 A bridge stretches across the Fenhe River in Taiyuan, capital city of Shanxi province. (PHOTO PROVIDED TO CHINA DAILY)

China is speeding up efforts to establish the national territory spatial planning system by 2020, with ecological protection being the priority among the three "red lines" that guide the construction.

In May, the Communist Party of China Central Committee and the State Council released guidelines on the planning system and the supervision of its implementation.

Early this month, the State Council released opinions on implementation of the three red lines, helping to guide the building of the system that is expected to bring about more efficient and eco-friendly development

Early this month, the State Council released opinions on implementation of the three red lines, helping to guide the building of the system that is expected to bring about more efficient and eco-friendly development.

The red line for ecological protection-a key government strategy putting designated areas under mandatory protection-is listed at the top. The other red lines are for the designation of permanent farmland and for an urban and rural development plan.

The ecological red line is to guarantee the safety of areas that are crucial to the protection of water sources, biodiversity, water and land maintenance and coastal safety, as well as wind control and sand fixation.

Other regions that may have important ecological value will also be protected under the red line.

According to the opinions, areas being protected by the ecological red line will be composed of two parts-core protected areas, where all human activities are prohibited, and normal protected areas that only allow nine human activities, including archaeological efforts, limited eco-friendly tours and infrastructure construction for water supply and disaster prevention.

The red line for permanent farmland designation aims to ensure farmland safety, improve farmland quality and prevent farmland from being used for other purposes.

Lastly, the red line for urban and rural development will have an overall consideration for the local population and economic distribution, giving a long-term picture of sustainable development in both rural and urban areas.

"The opinions focused on eco-civilization and being people-oriented," said Liu Guohong, head of the National Territorial Spatial Planning Bureau under the Ministry of Natural Resources. "They also emphasized that development should give way to eco-protection, which shows the government's great determination to protect nature."

The third national land survey, which was launched in 2017 by the State Council, will serve as a crucial support to the national territorial spatial planning work, according to Zhang Bing, deputy director of the bureau.

The survey, which is ongoing, will cover all land in China. It will thoroughly evaluate the status quo of the country's land use and collect accurate land data.

Survey items include cataloging the use of land resources, ownership and natural and economic conditions.

By 2035, China is expected to see highly efficient usage of land and water resources, which will significantly raise people's living standards and contribute to sustainable green development.